H. Hawkline has announced his fifth album, Milk for Flowers. The follow-up to 2017’s I Romanticize is slated for release on March 10 via Heavenly Recordings. Today, Huw Evans has shared the LP’s title track, alongside a video shot by Ben Hardy and edited by Casey Raymond, with choreography by Daisy Smith and styling by Gus Sharpe. Check it out below.

“Grief is a song that can’t be unheard: from the moment you learn it, you never stop singing,” Evans said of the new song and visual in a statement. “Its music paints the scenery – pulling the strings of every day. Forgotten corners and untended gardens can become rich with sickly vegetation, ice rinks and playgrounds decaying with every chord. These videos (this is the first of 3) are a way of trying to express that sensation in the most direct way possible. Every day, an audition. At least I choose the soundtrack.”

Milk for Flowers features production and musical contributions from Evans’ longtime collaborator Cate Le Bon. “A gentle and knowing hand, Cate did what no one else could have done: it’s what Cate always does,” Evans remarked.

Le Bon added: “I watched my dear friend, H.Hawkline, fold into himself and extract from a terrible time an album so exquisitely raw, yet deftly graceful. I had the extreme honour of being trusted as producer and gently helped him tease this beautiful work into existence. He writes music and lyrics that are porous to all the hues of a day. He sits melancholy at the table with absurdity and no-one bats an eye. Not without effort but always with a natural hand moving pieces around from the inside out. It’s a beautiful thing to be continuously moved and surprised by an old friend.”

Other collaborators on the album include Davey Newington on drums, Paul Jones on piano, Tim Presley on guitar, Stephen Black and Euan Hinshelwood on sax, Harry Bohay on pedal steel, and John Parish on bongo. Milk for Flowers was engineered by Joe Jones, with additional engineering by Krissy Jenkins. It was mixed by Patrik Berger and mastered by Heba Kadry. 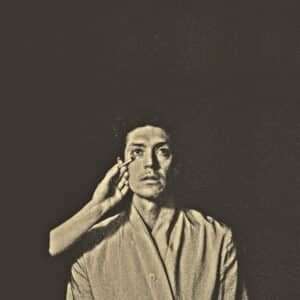