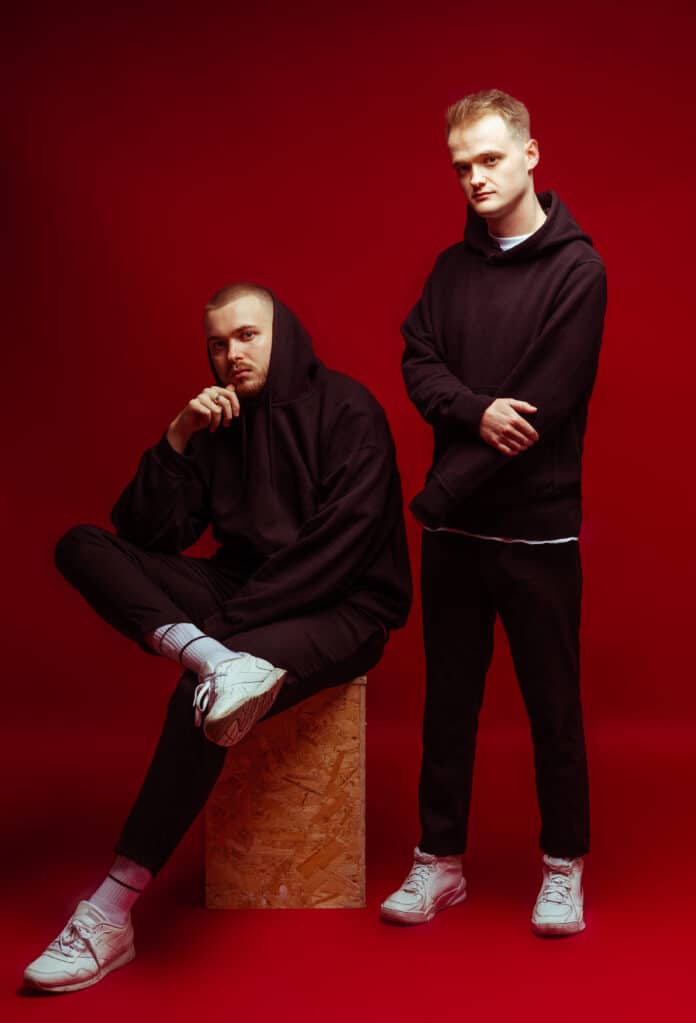 Duke & Jones are one of the quickest-rising names in the U.K. music scene, having released their single, Jiggle Jiggle, featuring documentary filmmaker Louis Theroux, earlier this year. With their recent release State of Mind published, they joined us for an interview to discuss the latest piece and their plans for 2023.

You’ve recently released your single State Of Mind, how did the idea for the song come about?

The Duke & Jones mission statement is to try and do as much as possible with the fewest number of sounds. The drop of State of Mind is a good reflection of that concept – with one bass sound, some vocal chops, and some pretty uncluttered drums. The idea for the break sections, on the other hand, was to pay homage to the euphoric progressive songs we grew up with – songs by people like Eric Prydz and the Swedish House Mafia. To that end, the verses have lots of classic synth elements and rhythms, and I think Marlhy’s vocals fit perfectly into that vibe.

You collaborated with Marlhy for the song; who approached who, and what was it like teaming up?

Marlhy’s vocals landed in our inbox one day like a gift from the gods! The topline was an absolute dream to work with as well, because it was already structured perfectly for a slow-building house tune. Marlhy has a very instinctive understanding of how to use melody and timing to underscore key moments in the song where the instrumentation changes – which is especially important for house music, where the sense of build and release needs to be extremely overt.

With the year coming to an end, you’ve had quite a successful year with big collaborations like Louis Theroux and releases like ‘Vertigo’ and Lucid. What has been your favourite project to work on in the past year?

Obviously the whole Louis Theroux thing has been a lot of fun. Getting in the studio with Louis was, I think we would both say, one of the most fun [and surreal] things we have ever done, never mind just in the past year. In terms of which musical project was the most fun to work on, though, it is actually a song we can’t really talk about yet. We made it in about 45 minutes, and we both got extremely giddy while we were doing it.

With 2023 on the way, are there any sneak peeks you can give us into your projects for the new year?

We can’t give you anything too specific, but we are putting the finishing touches on lots of new music. We joked about doing a Christmas version of Jiggle Jiggle (Jingle Jingle almost writes itself!), but it’s probably for the best if that one stays in drafts. We’ll also be getting US visas for 2023, so we’re very excited to head stateside and work with lots of people over there too.

If you could collaborate with any celebrity on a song in 2023, who would it be?

We’ve said it before and we’ll say it again – Mary Berry. We reckon she 100% has bars, and it’d be a lot of fun to bring that to the world. Apart from that, I’m going to keep manifesting an Ariana Grande collab.

Finally, what advice would you give up-and-coming music producers looking to thrive in the music industry?

Be patient! It very, very rarely happens overnight and it could take years before you get anything close to a break. It helps to have some confidence in what you make, but, after (rightfully!) basking in the glory of your new banger for a few days, it’s also important to be honest with yourself when comparing your music to professional tracks, and to be able to take constructive criticism. You’ll only be able to improve if you’re able to notice and reflect on issues with your own music. You should ALWAYS be polite too – new connections and opportunities can come from surprising places. You never know which person you meet might turn round a year down the line and ask you to help with a project, so it’s good to be nice to your whole network, both friends and friends of friends.

Stream State of Mind on Spotify.