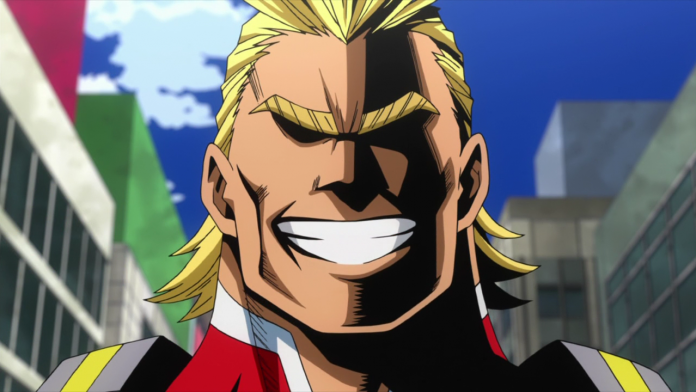 Wish X-Men was set in a Japanese high school? So do I!

In the world of My Hero Academia, 80% of the earth’s population have developed naturally occurring superpowers, known as “Quirks”. These can be as simple as being invisible or talking to animals or they be much more unique, like the ability to turn the sweat on your palms into nitro-glycerine!

The story follows young Izuku Midoriya. Originally born without a quirk, he is chosen by the most famous superhero in the world, All Might, to be the next line to inherit “One-For-All”, a quirk that boosts your body’s abilities to incredible levels. After gaining this new power, Midoriya must learn to control it in order to fulfil his lifelong dream of becoming a superhero, but first, he’s going to have to graduate.

Seeing as superheroes are quite the regular occurrence in this universe, special schools have been set-up to educate and train the next generation of heroes. Alongside his classmates, Midoriya must prove himself worthy of the power that has been given to him and learn what it takes to become a real hero.

Throughout this series, both Midoriya and his classmates are shown to be incredible examples of how to tap into the potential of a character. We are immediately introduced to everyone’s quirks as we meet them but I find myself consistently surprised by the ways in which they use them and the sheer amount of backstory that keeps being brought to the surface amongst the excitement of heroes battling villains.

Though the series begins like any good teenage based anime does with cheesy comedy and a huge amount of world-building for the purpose of easing the audience in. As soon as we know the main characters, it’s easy for anyone to choose their favourite and stick with them. With a huge variety of character types and style choices, you can’t see the same thing twice.

A personal favourite of mine is Shoto Todoroki, who possesses the amazing ability to control both ice and fire. He is immediately introduced as one of the series main powerhouses, yet his personality is quiet and distant in the first season. It isn’t until the second season that we realise his dark and incredibly violent childhood. Elements like this are what ground what would otherwise be a cast aside children’s programme. Merging comedic characters with those built upon damaged lives, that is why this show crosses the borders of a fast-paced, action filled anime and a dramatic, story based tale of self-discovery and growth.

I would recommend My Hero Academia to anyone who enjoys anime regularly, anyone looking for their first anime or anyone seeking the perfect example of how to keep afloat an entire class of characters whilst still making them all individually thrilling.