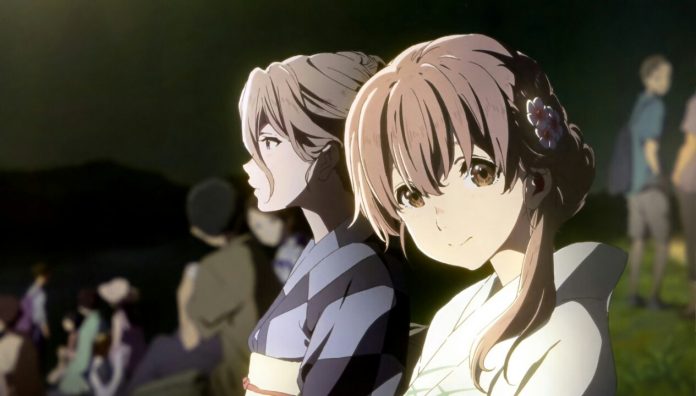 While Kimi no Na Wa stole the show in the Asian box office in 2016, Koe no Katachi was silently brilliant. A hard hitting, multi-layered story of redemption told beautifully through excellent directing, writing and sound design.

A young and bored Shoya Ishida (Mayu Matsuoka) and his elementary school classmates gasp at the arrival of the new transfer student Shouko Nishimiya (Saori Hayami) when they discover that she is hearing impaired. While she is welcomed at first and met with curiosity, Nishimiya’s classmates soon grow tired of having to adjust for her disability. Ishida and his classmates start to bully Nishimiya for being different, targeting not only her but those who try and get close to her. A complaint is made to the school regarding the disappearance of several expensive hearing aids belonging to Nishimiya, at which point the entire class turns on Ishida, blaming him for all the bullying despite taking part themselves. As a result of the bullying, Nishimiya transfers away, and Ishida is made the new target. After years of being ostracized through the rest of elementary school and middle school, Ishida (Miyu Irino) has become a loner who is unable to look anyone in the eye. Ishida then decides to try and find Nishimiya to make amends for all of the sins committed by his younger self.

Released in September of 2016, Koe no Katachi (officially called A Silent Voice in English but more accurately translated as The Shape of Voice) received very positive reviews but due to the hype generated by Kimi no Na Wa (Your Name), also released in 2016, the film did not get as much recognition as it deserves. Based on an original award-winning manga series of the same name written and illustrated by Yoshitoki Ōima, Koe no Katachi was produced by popular Japanese animation studio Kyoto Animation and was directed by Naoko Yamada, with this being her third film as the chief director.

Yamada’s direction of the film was truly excellent and fitting of the themes that were addressed, constantly showing character emotion through body language and eye movements in a story where one of the main characters can mostly only communicate through pen and paper with others around her. The fact that Yamada often opts to not focus on character’s faces also aligns with how Ishida is unable to look others in the eye, often looking down or trying to avert his gaze when talking to people around him. The backgrounds are always lovely to look at while also containing much information, for example, there is also a consistent use of flower language throughout the film, with each appearance representing a character’s feelings or personality in that scene. The koi fish that appear during the bridge scenes also carry meaning, symbolising Ishida, Nishimiya and the rest of the group. There is also the symbolism in the x’s over the faces of others from Ishida’s perspective representing his outcast status, although credit for this goes to Ōima as this was an element present in the manga. Characters on screen are almost never still, which brings life to each scene, for example during a dialogue between Ishida and his mother, Ishida is also attending to his niece, helping her by lifting her out her chair and onto the ground, while his mother cooks breakfast. In recent years, I’ve seen many animated scenes where everyone in the frame would stand still as only their mouths would move. This can make for visually dull viewing and can make what are meant to be interesting or intense scenes boring to watch if the writing is not good enough. Instead Yamada provides aesthetically pleasing animation to match the brilliant writing of Yoshitoki Ōima.

With pleasing and symbolic visuals and great writing to support, Kensuke Ushio provides a soundtrack and score to match the soft and melancholy nature of much of the film while becoming almost erratic in some of the darker and more intense scenes. The use of silence at many times throughout the film is also well done as it was often used to give perspective to how Nishimiya hears things.  Overall the sound design always supported the visuals perfectly, even if the upbeat music over some of the elementary school bullying seemed a bit out of place, however I think that the music in that montage represented how the children didn’t see the bad things in their actions, rather than just being in bad taste.

To label Koe no Katachi as a film centred on the potential romance between the two main characters would be wrong. This film tells a beautiful multi-layered story that comments on many topics, ranging from childhood bullying and growing up with a disability in Japan to teenage politics and suicide. Romance is an element of the film, but for most of its runtime, it takes a backseat to this hard-hitting story of redemption.

While risky to appoint the bully as the protagonist of the film, it actually ends up working remarkably well. Ishida did terrible things to Nishimiya in elementary school, some things that can be considered unforgivable, which at first can make you struggle to sympathise with the character, I mean who in their right mind would want to see a boy who bullied a disabled girl out of his school succeed in whatever goal he sets himself if he sets any at all. Yet as the film keeps running we see him receive karma for his actions and in turn, he becomes a loner as a result. We are also shown that he himself believes that he doesn’t deserve a chance at happiness and that he hates his younger self for the sins he committed. All of this, along with how hard he tries to make Nishimiya happy, makes the audience want to root for him, despite his past we want this reformed version of Ishida to find happiness. Nishimiya herself isn’t without fault as well, as by holding in her emotions and keeping a smile on throughout all the bullying she isn’t letting those bullying her realise their wrongdoing. Her innocence and want to not be a burden on others also leads to her isolation in the classroom. These characters are more complex than the label of bully and victim, there is so much more going on and the fact that there isn’t a simple answer to this problem alongside the many other issues present throughout the film makes it feel all the more real and relatable. In fact, Rie Saito, a Japanese politician who lost her hearing at the age of one and is a prominent member of the deaf community in Tokyo, suggested in an interview that the film be shown in schools to young children to not only teach them about hearing disability but to also better educate on the effects of bullying. All of the characters in this story have flaws that make them seem very human, so watching them interact with each other is fun to watch when things are going well while also being tough to sit through when relationships start to get rocky.

If there are any flaws in this film, most come down to the fact that much was cut from the original source material in order to fit the story into feature film length. The absence of the goal of coming together to create a film makes the forming of the group kind of feel like it’s come out of nowhere, however this does not distract too much from the plot. Many scenes with Satoshi Mashiba (Toshiyuki Toyonaga) were also cut which is a shame as it made Mashiba feel almost out of place in the film with no real reason to be there. This brings up the point that this story might have been better off being adapted into a TV series instead, however as a standalone film it works brilliantly and while much was cut from the source material the key elements of Ōima’s story are still present. These are flaws that only really matter to avid fans of the manga, those who chose to watch the film on its own will still be moved by the story and how well it is told.

To conclude, Koe no Katachi is an excellent film featuring beautiful and lively visuals, a soothing soundtrack and strong writing that touches upon many real life issues. Therefore, I would highly recommend it to anyone regardless of whether they are fans of anime or just general viewers.

Review: Koe no Katachi (2016)To conclude, Koe no Katachi is an excellent film featuring beautiful and lively visuals, a soothing soundtrack and strong writing that touches upon many real life issues. Therefore, I would highly recommend it to anyone regardless of whether they are fans of anime or just general viewers.