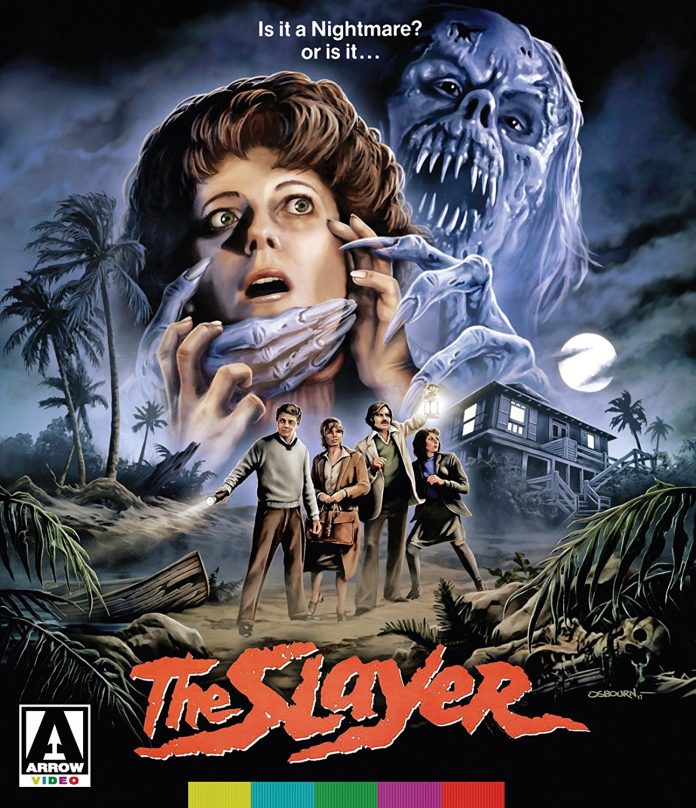 Many of the films that Arrow so brilliantly puts out have previously been starved of any high-quality home video release. The Slayer (1982) is no different. Beforehand, it was only available in truncated versions, but now Arrow Video finally brings this obscure psychological horror to crisp blu-ray and DVD life.

First of all, the film itself…

Anxiety-ridden artist Kay (Sarah Kendall), her husband David (Alan McRae), her brother Eric (Frederick Flynn) and his wife Brooke (Carol Kottenbrook) escape to an isolated beach island for a vacation. Plagued by horrific dreams she’s had since childhood, Kay becomes more and more frightened that what lurks in her mind might be coming to life. As people die in gruesome ways, Kay becomes convinced that her nightmares are real and that some supernatural entity is closing in on her.

The Slayer has a genuinely fascinating concept, but is ultimately executed very poorly. A slow pace harms the narrative, and the script’s excessive ambiguity does not work in the ‘less is more’ manner. The central idea of a creature from the psyche slowly manifesting itself until it cannot be stopped is a brilliant one – as exemplified by Forbidden Planet (1956). However, so much of this idea is left unexplored that it becomes unsatisfying. Only at the halfway point do we receive any clue as to the root of Kay’s nightmares (coming from her brother Eric), but this is as far as explanations go. Leaving the parameters of her psychology and the supernatural being up to the audience could have been interesting had the writing given more for one to understand. By the film’s end however, we are no closer to understanding the titular Slayer or its relation to Kay than we were at the beginning.

Another issue lies with the characters themselves. Eric, Brooke, and David are all portrayed as hostile to Kay’s anxiety surrounding her dreams. Although Brooke slowly begins to soften and eventually sympathises with Kay, the characters are predominantly dismissive of her fears. Consequently, it is difficult to feel for these individuals upon their deaths, as they rarely seem to afford that same sympathy for Kay. One might be able to overcome this problem if Kay herself was an engaging or likeable hero. On the contrary, Kay is portrayed with such disengagement from reality that it is difficult for the audience to find a way into her character. It could be argued that the quiet, subdued, yet frightful performance by Sarah Kendall works for such a troubled individual, but the end result is someone who rarely expresses the full emotional range – thus stifling our connection to her.

The makeup and gore effects hold up remarkably well. Pitchforks pierce skin, necks are mashed, and heads are bashed in. Robert Short’s creations for the film, whilst sparsely placed throughout, work magnificently. Unfortunately though, the monster of the title appears for less than ten seconds-worth of screen time. As hideously brilliant as its visage appears, it is a shame that the filmmakers worked hard to establish the menace of the beast (through both the suspenseful soundtrack and the bloody murders) and yet the appearance of this creature that has stirred the events of the whole narrative feels like an after-thought – almost like the creature added to the end of The Beast with a Million Eyes (1955).

The Slayer is not one of the stronger horror films of the early 1980s. Plagued with pacing and character issues, and a title creature whose appearance is fleeting at best, it is safe to say that the film has its problems. Although gifted with Robert Short’s great makeup effects, they ultimately cannot save the film.

Now for Arrow Video’s release itself…

Qualms with the film aside, Arrow has outdone themselves in assembling a release that is superb. The Slayer has never looked better, thanks to a newly restored transfer taken from the original negatives. The Slayer itself may only appear briefly, but it looks vivid and terrifying when it does thanks to the 1080p picture quality. The care and dedication afforded to this title is shown in the sheer number of extras included.

Nightmare Island: The Making of The Slayer is a fascinating documentary that chronicles the film’s production. Of particular interest is when Director and Co-Writer J.S. Cardone talks of how they wanted to steer away from doing just another slasher film and instead opted to pursue a story more bound in concepts surrounding the very edge of consciousness – bringing to mind the works of H.P. Lovecraft.

Karen Grossman, the Director of Photography, also speaks about her role in the production. Being a woman cinematographer ‘is hard today and it was hard back then’ Grossman notes, but her strong confidence in her abilities remains inspiring and palpable.

Makeup effects artist Robert Short tells of how he was recommended for the film and how his intrigue at the nightmare creature brought him on-board. Short also explains how some of The Slayer’s few-but-gruesome kills were achieved – including the ingenious eye bleeding effect on actor Alan McRae. Short’s stories of the production are brimming with references to makeup artist maestros like Jack Pierce and Dick Smith. Knowing his clear affection for artists of old certainly makes watching his effects onscreen all the more enjoyable.

Of particular merit is The Tybee Post Theatre Experience. On Tybee Island’s refurbished cinema – the very same theatre featured in the film – Arrow’s restoration of The Slayer was specially screened. Included in the extras is the chance to essentially join that experience. With audio from the showing, every reaction, every laugh, every cheer, every scream is there for your enjoyment. Ewan Cant – Arrow Theatricals Executive – presents this feature and makes a poignant comment about the similar fates of the cinema and the film itself. Following the audio accompaniment to the film is a special Q&A session with Arledge Armenaki and the aforementioned Ewan Cant.

Brimming with all these extras and more (including two audio commentaries featuring the film’s director and actress Carol Kottenbrook), the affection that Arrow Video has bestowed upon this title is infectious. The film may have its issues, but the lengths that Arrow has gone to in crafting the release for this obscure (though perhaps not anymore) horror are remarkable. Recommended.

Review: The Slayer (1982) - Arrow Dual-FormatThe Slayer is not one of the stronger horror films of the early 1980s. Plagued with pacing and character issues, and a title creature whose appearance is fleeting at best, it is safe to say that the film has its problems. Although gifted with Robert Short’s great makeup effects, they ultimately cannot save the film