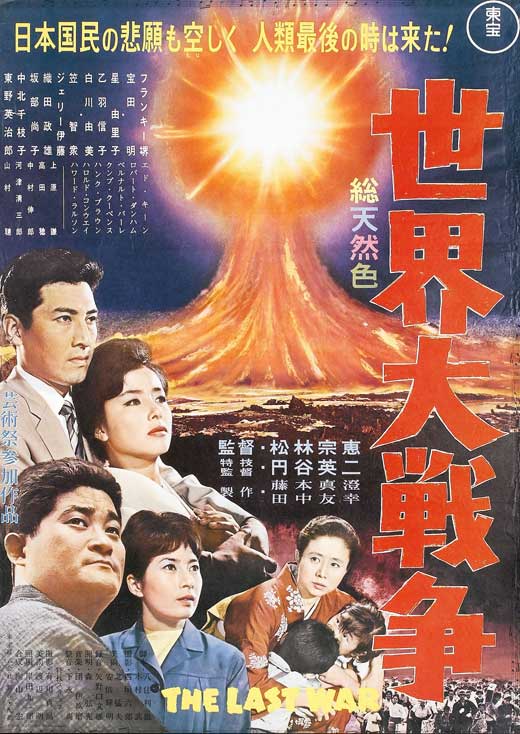 Shūe Matsubayashi’s The Last War is a truly moving piece of cinema. Depicting the dreadful lead-up to a global nuclear conflict, the film unfortunately finds itself evermore important today. With Frankie Sakai, Yuriko Hoshi, and Akira Takarada projecting such depth and nuance to this drama, The Last War is a hidden gem, deserving the same praise and admiration afforded to Mick Jackson’s nightmarish Threads (1984), and Nicholas Meyer’s The Day After (1983).

Frankie Sakai, famous Japanese comedian, plays Mokichi Tamura. Working as a chauffeur for a press centre, Tamura receives sporadic pieces of information about the rising global tensions between the Federation (of which Japan is a part), and the Alliance – stand-ins for NATO and the USSR. Tamura is a family man. Proud that he’s able to support his wife and children, he wants the best for their futures. In the face of world events, Tamura maintains his assertion that a war will not happen. He thoroughly believes in the decency of mankind not to blindly walk into oblivion. Tensions, however, continue to rise as aircraft from both sides fly into enemy territory, a brief conflict breaks out over the 38th parallel, and missile delivery systems malfunction. Tamura’s faith in humanity is tested – perhaps (like the global crisis itself) to breaking point.

The Last War weaves its narrative wonderfully. The lives of Tamura’s family, including his eldest daughter, Saeko (Yuriko Hoshi), and her sailor lover, Takano (Akira Takarada), are intercut with the worsening cold war crisis. This works remarkably well to amplify the horror as the wider world context is juxtaposed to Tamura’s optimism. Whilst we witness a nuclear warhead almost launch, Tamura continues to joke about his investments in the stock market. That charismatic optimism that Sakai portrays so well arguably makes Tamura the most tragic of all the characters. His hope withstands the world collapsing around him, until there is no hope left to grasp. In a particularly harrowing moment (one which exemplifies the acting excellence of Sakai), Tamura’s faith begins to crack. Valiantly, he calls out his plans for the future to the sunset, tears welling around his eyes, as if in denial of the unspeakable reality.

Akira Takarada and Yuriko Hoshi’s performances are also wonderful. One believes in the depth of their affections, and in turn of the loss they face even before their world is ripped from them. Both characters call to mind Commander Dwight Towers and Moira Davidson from Nevil Shute’s similarly-themed 1957 novel, On the Beach – particularly in a moment where Saeko looks on hopelessly as Takano’s ship heads out to sea.

A testament to both Hoshi and Takarada’s abilities comes in a gripping moment where neither speak. Via morse code from Takano’s ship, the pair say their final goodbyes. ‘You made me happy…we were both happy…we were happy’ sends Takano as Saeko struggles to hold back her tears. The scene ends abruptly, cutting to the family’s birdcage, the sound of the radio announcing grim details in the background. A powerful image, it wonderfully encapsulates the narrative. Though perhaps blissfully unaware until it is too late, these are caged, trapped people. Now, they can only listen and wait for the inevitable.

Staggering imagery is one of The Last War’s many strengths. Much of what we see of Tamura’s family is achieved through still shots. Without the excess of movement, we are allowed (in pseudo-documentary style) to sit and listen to Tamura, his wife, and children. We are invited to join an intimate set of relationships. When we are permitted to return to the more unemotional view of the outside world, the difference is palpable. By contrast, of note is a drawn-out hand-held shot of the interior of a Federation missile base. It appears like a point-of-view shot, yet the lack of interaction between cast and camera provides an uncomfortable feeling of detachment. We feel like interlopers in a dangerous place, with people who don’t acknowledge us. In these visual differences, cinematographer Rokurô Nishigaki depicts the spatial and symbolic distance between those who push the buttons and those who consequently suffer.

When the inevitable arrives, the visuals are indescribable. The word ‘hellish’ comes to mind, but falls short of recognising the disturbing images we are forced to take in. Eiji Tsuburaya’s miniature effects are astounding in how graphically they depict the end.

The Last War is a difficult film to watch. Masterful in its central performances and artful in its visuals, Shūe Matsubayashi arguably delivers one of the best nuclear war dramas ever made. The narrative speaks to the fragility of faith: in ourselves, in others, in our entire worldview. However, somewhat strangely, The Last War has a life-affirming quality to it. Witnessing the collapse of all we know and love arguably makes one aware of just how precious our existence is. Matsubayashi’s film affords only a glimpse of a horrifying reality, but that glimpse is enough to remind us of all we could lose – and that peace is worth fighting for.

Review: The Last War (1961)The Last War is a difficult film to watch. Masterful in its central performances and artful in its visuals, Shüe Matsubayashi delivers arguably one of the best nuclear war dramas ever made. The narrative speaks to the fragility of faith: in ourselves, in others, in our entire worldview. However, somewhat strangely, The Last War has a life-affirming quality to it. Witnessing the collapse of all we know and love arguably makes one aware of just how precious our existence is. Matsubayashi’s film affords only a glimpse of a horrifying reality, but that glimpse is enough to remind us of all we could lose; and that peace is worth fighting for.