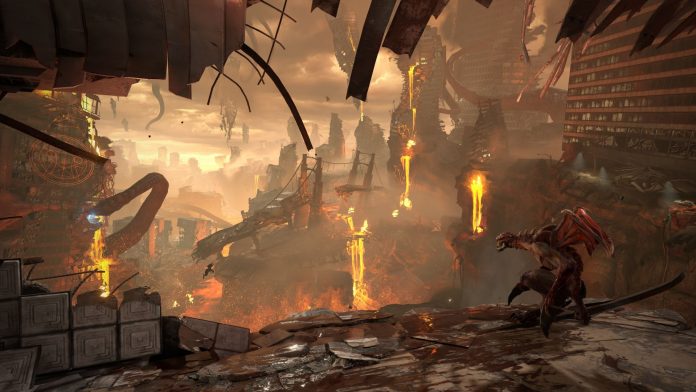 So QuakeCon 2018 has come and gone, and with it we have a heap of information and gameplay footage for the follow-up to the amazing Doom 2016, Doom Eternal. As enormous fans of the entire Doom series, this was something which had us up to hype levels which we would usually never recommend when it comes to gaming expectations but damn, damn does this look good.

Don’t believe us? Take a look for yourself?

So, what has changed, what additions do we see to the Doom 2016 formula, and what call-backs have we seen to the original games in the series? As your unofficial Doom Guy, I’ll do my best to point out everything I picked up.

Doom 2016 took place within the Mars UAC installation and Hell itself, with our Doomguy being the only living flesh creature to pass between the two worlds. After a long and brutal effort to close the hell portals and destroy Argent (hell) Energy production, we ended with the enigmatic Samuel Hayden stealing the equally mysterious Crucible sword from Doomguy, teleporting him away, and ostensibly continuing his research into the use of Hell energy.

Based on what we have seen, this did not go well. 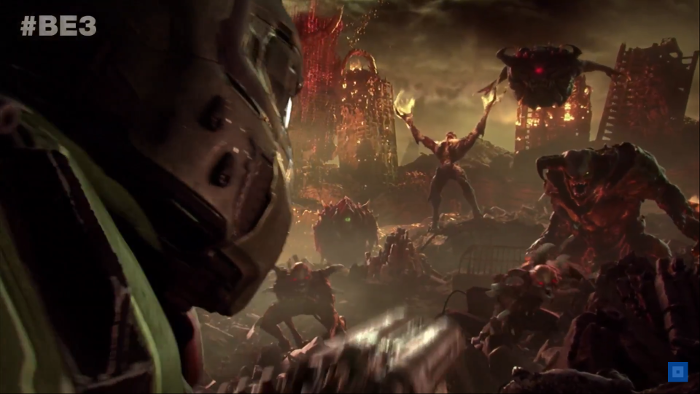 The team at ID have made it a priority to increase the variety of locations in Eternal, with the Martian moon of Phobos appearing as a playable location in one video, and an apparently Hell-invaded Earth being the setting for another. While chances are these will not be the only explorable locations, the idea of being on a demon infested earth is one reiterated from Doom II, albeit with an ever-so-slightly increased emphasis on fidelity. 25 years of technological advancement will do that. 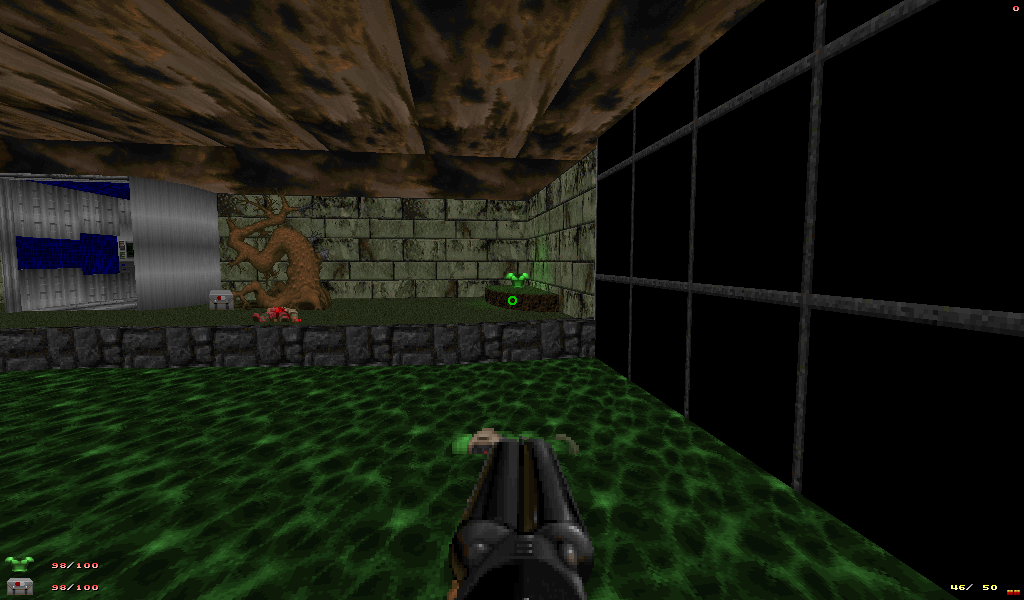 In terms of the story, we know that the UAC seems to both know of Doomguy, and be sufficiently terrified of him.

One of the first changes noted by ID over the previous Doom game is an increased shift towards single player content. Doom 2016’s launch was a bit off in this regard, with a great deal of marketing attention being towards a competitive multiplayer component that very few wanted, or were excited for. Also noted in a post QuakeCon interview was how the designers wished they had focussed more on single player DLC over multi for the reboot, which they claim has been their new direction going into Doom Eternal. This also means that Snapmap is not looking likely, though on our end we can’t really say we’ll miss it.

The better news? ID has stated that proper modding is something which they aiming for somewhere down the line. While this is not an easy task given the megatexture technology of the recent ID Tech game engines, the fact that they are willing to finally make this step is a huge boon to long-time fans, with the original Doon standing as one of the most moddable and actively modded games to this day.

In terms of multiplayer, it would not surprise us to see similar deathmatch and other gametypes from the previous games included, just in a lesser capacity. What has us more excited is a Dark Soulseque way of invading other players games as demons, should they have the option enabled. Not only does it seem like a lot of fun in terms of messing with people, it shows that the team has managed to get multiplayer working in the base game, meaning true story based cooperative play might appear somewhere down the line.

So far the weapons we have seen share a lot in common with those of the last game, in a similar fashion to what we saw with the original Doom and Doom 2. While some guns appear to be replaced entirely with similarly acting alternatives, there are others which retain the same name, while changing their alternative fires.

The Siege Cannon from 2016 appears to be replaced by the Ballista, a weapon which operates in much the same way while relying on what appears to be Hell Energy, as is also the case with the Rocket Launcher. The single shotgun, on the other hand, has seen its grenade secondary replaced with a delayed sticky bomb, and its triple shot secondary replaced by a much more terrifying automatic fire mode. While these are great, our favourite so far has to be the super-shotgun, which has seen a grappling hook added as a secondary. While this cannot be used on the environment, it can be used to quickly pull Doomguy closer to the enemy, up into the sky, or across gaps, giving not only a great way to get all up in their business, but also in opening up opportunities for dodging and traversal.

Further aiding in movement is the new dash system, which appears to be linked to the double jump mechanic. In the videos we saw, Doomguy had access to two recharging boosts available both on the ground and in the air, giving even greater ease in workplace mobility, and bringing the game even closer to the insane speed of the originals.

What used to be the grenades has now been replaced by a shoulder mounted launcher, operating in much the same way. Rather than having to stop and throw, Doomguy can now pop a grenade out without the use of his hand, and this can also be swapped out for a flamethrower, with additional fire modes being probable.

Of course, the chainsaw reappears, remaining as a great tool for both instantly despatching an enemy and refilling your ammunition. In fact, the shoulder mounted flamethrower appears to act in a similar fashion, as shooting burning enemies seemed to guarantee armour drops, though time will tell if this is correct.

We know runes will return, with the powered up punch rune we have seen so far being found, rather than earned through a Rune Trial as in the previous game. We also know that Glory Kills are as important and satisfying as ever. These are further aided by the addition of the knife to Doomguy’s suit, and though many were wondering if this might signify a completely different form of Glory Kills, we would bet on it being utilised more as a way to extend the variety of possibilities, rather than a completely separate mode.

Also nice are the little health blue health containers found on the map, which is a fun little callback to the +1 health potions of the original Dooms.

Again harkening back to the improvement of Doom II over the original Doom, Doom eternal looks to double the number of enemies, and open up the behaviours and appearances of those we’ve already seen. Imps look closer to their original counterparts, with boney protrusions invoking their classic expression, while the Cacodemons now bleed their original blue.

Gargoyles now patrol the unfriendly skies, supported in the air by classic enemies like the Pain Elemental, while Doom II style Mancubi and new Arachnotrons shoot from the ground. Aiding in this are new forms of older enemies, such as the newer blade-wielding Barron of Hell. Even better, enemies take visible damage from the punishment Doomguy dishes out, with the Baron’s being especially impressive as each shot tears away their flesh, revealing innards tied together with the energy of hell itself. 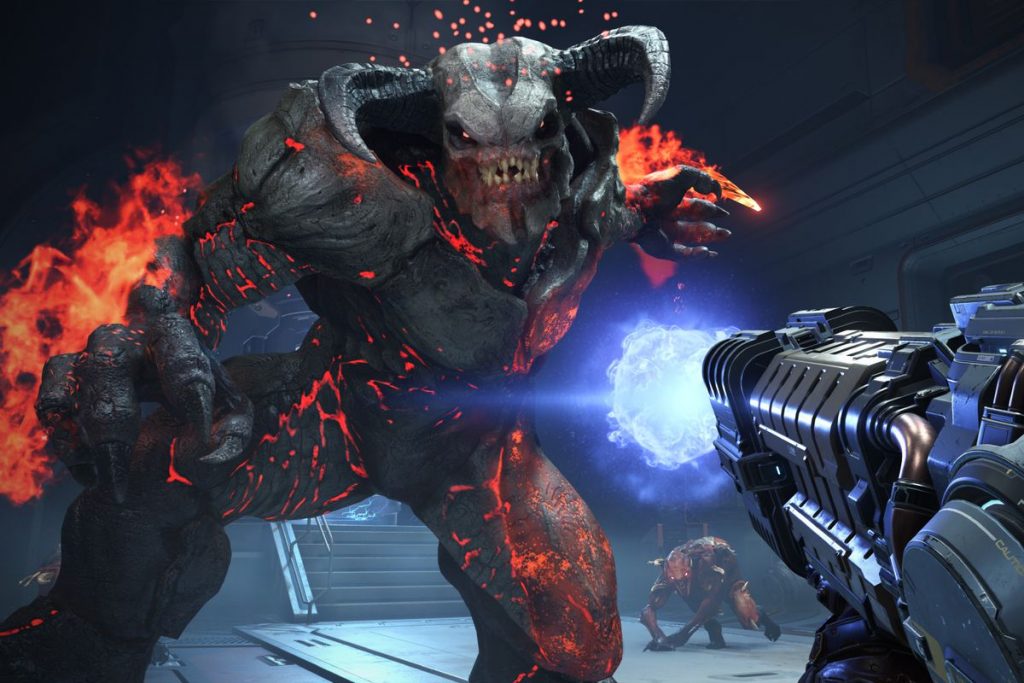 With a release date slated for December 28, 2018, it won’t be too long until we get our hands on this Doom Eternal. Oh, and hey, remember these guys?