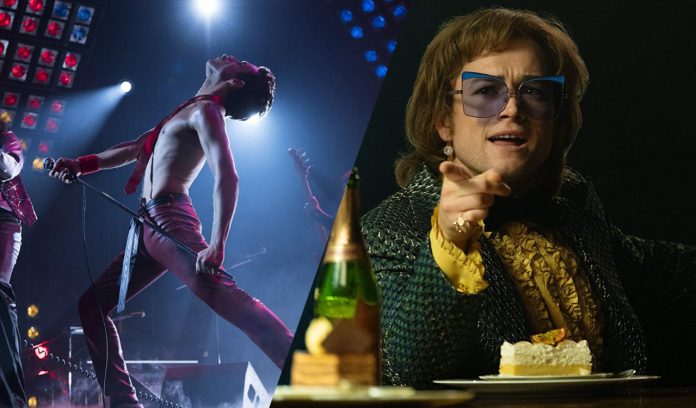 Two musical biopics. Two flamboyant, iconic British Rockstars who had their own demons, pitfalls and tough critics. And one director (kind of) – in the form of Dexter Fletcher who took over from the fired Bryan Singer to complete Bohemian Rhapsody and then went on to fully helm Rocketman. The recent release of the Elton John biopic followed in the wake of the Freddie Mercury global blockbuster hit of 2018, which exceeded all financial expectations (taking an impressive $903 million at the box office). It’s success meant that Fletcher was truly Under Pressure. But, despite their similarities on the surface, the films feel like they were made on completely different planets – which I’m sure was entirely the point and it allows these distinguished figures the space they rightfully deserve. It is exactly how, where and why they differ that makes for a fascinating discussion.

Structurally, the films couldn’t be further apart. Despite being named after Queen’s innovative hit that’s acclaimed for its ingenious structure, Bohemian Rhapsody follows Mercury’s life chronologically, which feels far from innovative and makes the film cliche at best: the band meet, they rise to fame despite setbacks, fall and then rise again. Though there is a cold open, which entails an accomplished long take shot of Mercury (Rami Malek) from behind as he approaches the live aid stage,it is largely negligible as the film then goes on to simply follow his life from a baggage-handling teenager to a live aid superstar. The film concludes with a re-enactment of their 15-minute Live Aid performance, meaning the film is structurally more akin to the non-integrated musical or backstage musical of the Golden Age of Hollywood, which typically reserved their biggest showpieces for the end. This finale left audiences divided: whilst many wallowed in the spectacle and the 80s nostalgia, others found it tiresome and mind-numbingly excessive.

In contrast, Rocketman adopts a shrewder structure that doesn’t force the star’s discography to flow chronologically. Rather than according to their timeline, the songs are cleverly arranged to match a character’s mood or feelings. This unrestrained shuffle allows the film’s structure to be more complex.

It commences with Elton (Taron Egerton), lavishly garbed in a horned-devil, angel-winged orange suit, extravagantly entering a rehab therapy meeting and professing his flaws and backstory. From then on, we are drawn into various significant events in Elton’s life, which are structured around a selection of songs- Saturday nights alright (for fighting) for Elton’s determined performances in local pubs;Crocodile Rock for when Elton’s career begins to take flight (literally) in the Troubadour in LA; and the Honky Cat for the sly prowl of John Reid (played by the screen-dominating Richard Madden). The numbers are carefully chosen and integrated in a manner that makes them feel relevant to the plot as well as adding a compelling depth to the hits.

This structuring is also problematic and links to, perhaps, the greatest flaw of the film: it’s not, in the conventional sense, biographic – it’s an autobiography. Not only does the film construct its protagonist as an unreliable narrator by first person narration throughout but the film production itself was heavily guided by Elton John; produced by the film company he founded and overseen by his husband (David Furnish). Though this offers an element of fidelity, it begs the question: to what extent is this actually representative of Elton and his life or is this the sanitised version that he wants us to see? I don’t wish to detract from the honest and significant gay male sex scene (the first major Hollywood production to include one) or the sincere and wonderfully abstract portrayals of Elton battling his addictions. But, Elton is persistently depicted as a victim and it feels necessary to wonder whether he really was, if this is the side we are shown or (if he was) does this make for a good film?

Though moderated by Queen, flooded with historic inaccuracies and a creative licence frequently deployed, the depiction of Mercury feels more balanced and objective; he is as much the antagonist as he is the victim. Perhaps, this is more in tune with the personalities of the individuals but it feels partially due to the respective portrayals of Elton and Mercury by Egerton and Malek. Both representations deserve merit and prevent the films from sinking into the biopic-abyss. But, like the films, they are completely different. When watching Malek, he seems to totally embody everything about Mercury and his acting is so outstanding, it’s easy to forget that is is, in fact, a performance. Egerton’s Elton is equally, brilliantly executed but this is indeed Egerton’s Elton – it feels harder to forget the man behind the ginger wig and horn-rimmed glasses. It’s certainly a performance rather than a definitive portrayal. This is not, however, a bad thing and primarily results from the fact that Egerton actually sings all of Elton’s songs, whilst Malek lip-synched the Queen’s songs with the aid of a Mercury sound-alike.

The real question is then- which is better? And the honest answer is: I don’t know and it depends. Stylistically, Fletcher perfectly matches the differing aesthetics to the superstar: clean-cut, soap-opera thriller for the dramatics of Mercury and otherworldly, dazzling spectacle for the flamboyant Elton. These films are like non-identical twins- they have the same director at the core and are from the same Rock-biopic family- but there aesthetics and style are nearly, completely antithetical and should be treated as such. Whether you’re more fan of a Crocodile Rock or a Killer Queen, both films are a must-see and leave us wondering which British rock icon will be next?