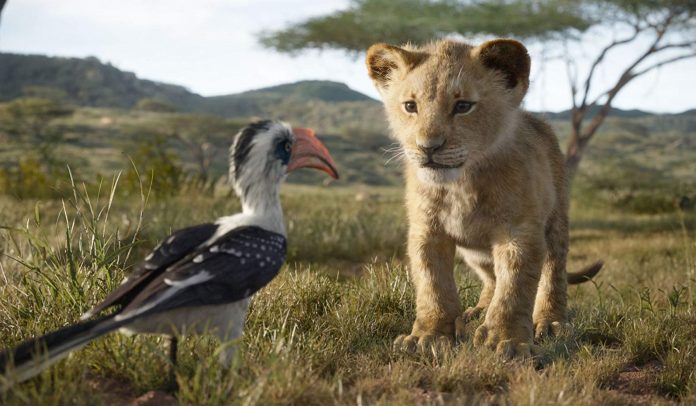 In Jon Favreau’s new photorealistic copy of the 1994 animated classic, Timon (Billy Eichner) relates one of the most ironic lines of modern cinema – “To change the future you’ve gotta put the past behind you”.

With their box-office-hungry attempts to recycle their animated classics into photorealistic blockbusters, this is exactly what Disney aren’t doing – putting the past behind them. The Lion King follows in the wake of a series of remakes: Kenneth Branagh’s Cinderella, Bill Condon’s Beauty and the Beast; and in 2019 we’ve had Tim Burton’s Dumbo and Guy Ritchie’s Aladdin. As of yet, the remakes have (if sometimes tediously) added elements or layers to the classics – whether it’s a defiant song for Jasmine to sing to her oppressors, a chance for Beast to emotionally roar his feelings for Belle or, in the case of Dumbo, a whole new, laborious second half. But what Favreau’s remake adds, remains largely questionable. It is, in many ways, an exact replica of the original, but made uncannily realistic, yet also not with no “real” live-action at all. The only real question is then – what’s the point?

We open with the classic, renowned shot of the “sun rolling high through the sapphire sky” – the only real shot that wasn’t rendered by a computer. But this moment is fleeting and we are soon launched into the crowd of overwhelmingly, realistic animals. As we narrowly miss being trampled on by the immense elephants and leap with the dazzling gazelles, it feels as though we are watching an animal documentary – expecting Attenborough’s imminent arrival. But as the eccentric baboon Rafiki is found amongst the crowd and begins his passage towards the towering Pride Rock, we are reminded of our place in the digital artificiality of the Circle of Life.

Having successfully conquered another Disney classic with The Jungle Book (2016), Favreau’s brilliant ability to construct realism comes as no real surprise. As the opening song concludes and the title appears, the technology still undeniably maintains its cutting-edge status. The issue comes when the animals open their mouths. The fantastical elements of the original animation make it plausible for a warthog to burst into song, but the profound attempt at photorealism makes a lion singing feel (unsurprisingly) unnatural and at times even uncomfortable. Though the hair on Mufasa’s mane is powerfully authentic, as he opens his mouth, the realism becomes perplexing, to say the least.

This perfectly links to, conceptually, the greatest flaw with photorealism and I would argue the biggest concern for Disney: the magic of the original seems to be lost. The film feels like its split into two distinct halves with the Hakuna Matata number delineating the border between the two. Before the number, the film’s pacing feels wrong and key moments seem rushed. For instance, Scar’s Be Prepared number is an unforgettably powerful establishment of his villainy in the animated original and, as a child, it’s a spine-chilling showpiece with rising emerald flames that will haunt your dreams or, at least, your mind for the remainder of the film. Though the gloomy shades of the elephants’ graveyard are reminiscent of the original, the moment is rushed and disappointingly forgettable. 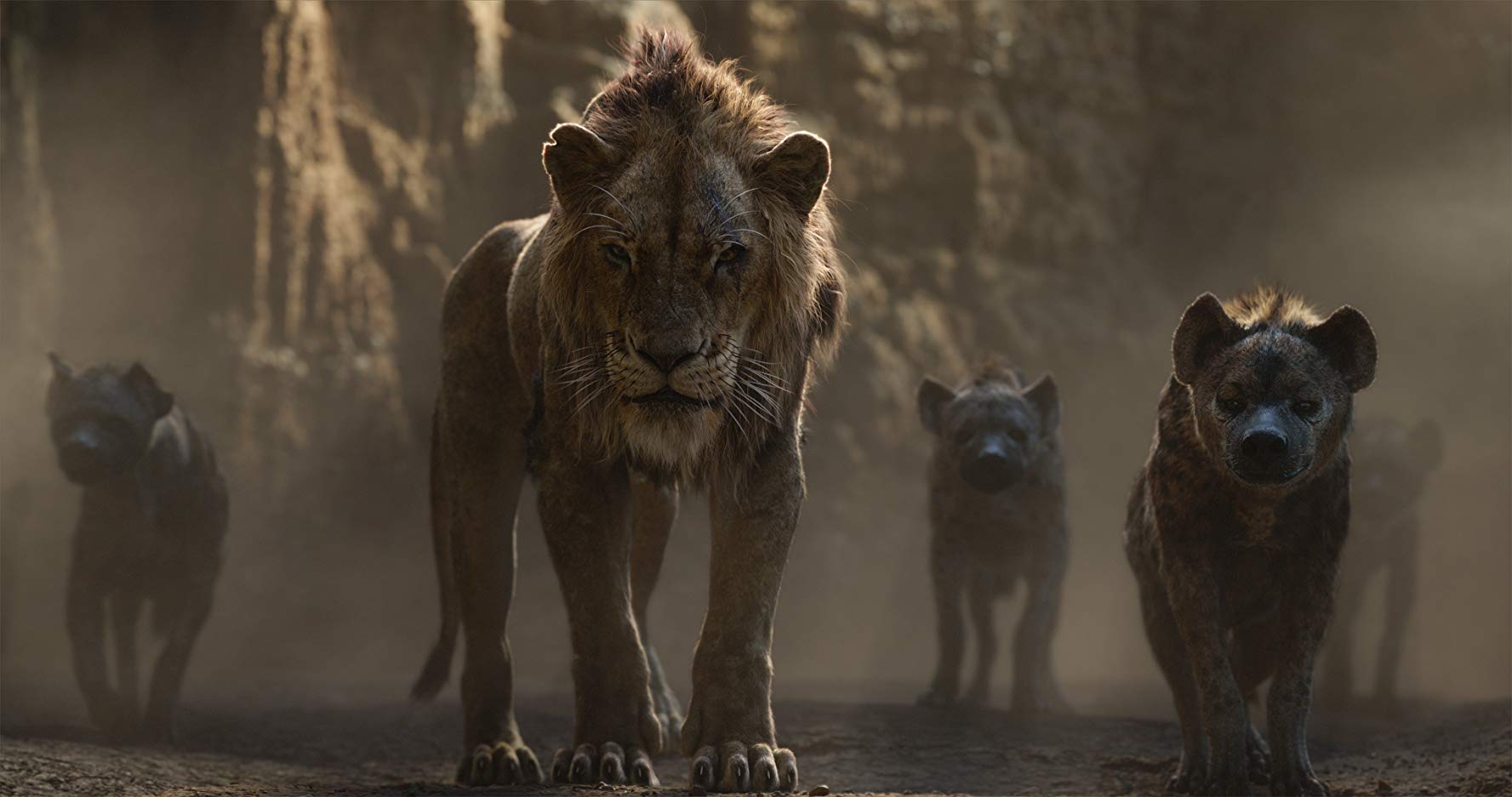 Similarly, the notorious wildebeest stampede in the gorge should, in principle, become even more heart-wrenching and, for lack of a better word, “real” when constructed by CGI. Instead, the impact of the moment feels lost and, if anything, falls victim to photorealism with emphasis placed on the magnitude of the stampede rather than the emotions of Simba. The hastiness of an emotional moment echoes the rushed ‘Baby mine’ number in Burton’s Dumbo remake. Perhaps Disney doesn’t want to detract from the momentous scenes of their originals but then why go to the effort to remake them at all?

Other than script alterations, there are a selection of additions that weren’t part of the animated original. The mere ability to list them alone suggests how little was changed and, in truth, none of them serve any great narrative function. The most noticeable inclusions were: a scene involving Nala hiding from Scar, the greater threatening emphasis placed on the lead hyena and the small insertion of Beyoncé Knowles-Carter’s new song – ‘Spirit’.

There are also sequences that appear to be purely intended to extend the length of the film and/or to boast CGI’s capability; namely, a sequence entailing a strand of hair from Simba’s mane passing from a Giraffe’s mouth to the tiniest ant, and another involving a mouse (a trivial nod to Mickey) as it scurries through the grassland. Though beautifully constructed, as I’m sure was the point, these sequences feel superfluous and come across as feeble as young Simba’s meagre roar to scare away the hyenas – pathetically worthless.

In the voice cast, whilst Donald Glover and Beyoncé Knowles-Carter suffice as the roles of Simba and Nala, John Oliver’s take over from Rowan Atkinson as report-reading hornbill Zazu is disappointing and lacks the colourful and blustering wit that Atkinson brought to the part. Similarly, despite Shakespearean credentials, Chiwetel Ejiofor’s Scar doesn’t have the villainous impact and dramatic depth that Jeremy Irons had. Ejiofor’s depth also struggles to match the incomparable return and intensity of James Earl Jones as Mufasa, which Irons was more apt at challenging.

Thankfully, the film is somewhat redeemed by Billy Eichner and Seth Rogen, who take over from Nathan Lane’s meerkat Timon and Ernie Sabella’s warthog Pumba. They re-instate the fun of the original as soon as they delightfully perform Hakuna Matata, which actually sets the tone and slows the pacing nicely for the remainder of the film. As well as re-instigating the Disney magic from the original, they introduce new touches like their persistence that life is not a self-sustaining circle but a “meaningless line of indifference” and a brilliant rendition of ‘Be our Guest’ that is sure to leave you cackling like a hyena.

With the remake recently hitting the $1 billion milestone at the worldwide box office, it feels like the perfect metaphor that, during the screening, I could hear audience members munching their popcorn from their souvenir Lion King buckets – engaged but not as enthralled as they would’ve been in 1994; a wonderful classic rehashed and literally replicated into a popcorn movie. Despite incredible photorealistic progression, this Lion King remake will leave you leaning more towards the “line of indifference” and ultimately yearning for the magic of the Circle of Life.