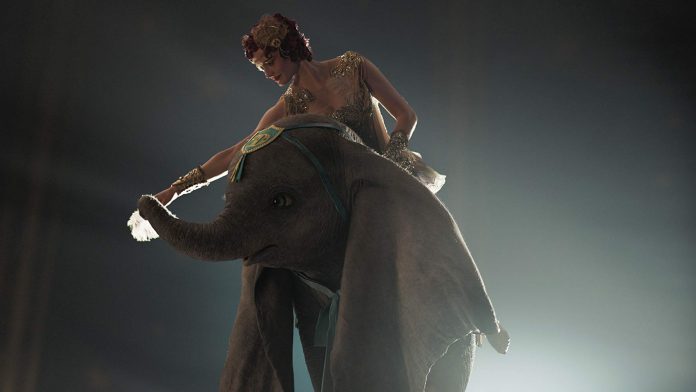 It’s 2015 and Tim Burton has just been announced as the director for the live-action adaptation for Dumbo. Slated for release in 2019, it was set to be the first of Disney’s 2019 remake line-up with Aladdin, The Lion King, Maleficent: Mistress of Evil, and Lady and the Tramp all set to follow in its footsteps. Everything about the announcement of Tim Burton as the director for Dumbo makes sense. It is, in theory, the perfect equation after all. Take a beloved, magical animated classic with an underlying darker underbelly and add a director, who is apt at manufacturing stunning visuals that can match or supersede the aesthetic of the original and who has an ability to meticulously draw out the more sinister skeleton of fantasy worlds. It’s a combination that should captivate either children who love the magic of Disney or adults who wistfully want to step back into their childhood and those who long to be consumed by Burton’s delightfully nightmarish realm. If carefully controlled (as many of Disney and Burton’s previous works are), it should be able to perfectly hit all three demographics resulting in a financial and critical success for Disney that will provide a nice, encouraging safety-belt for their subsequent remake set-ups.

Fast forward to March 2019 and it seems the “perfect equation” has failed or, at the least, not provided the answer that was desired. As expected, Burton imparts his dark touch, but instead of complementing the magic, it adds, literally at times, a grey tinge that removes the magic all together. In truth, the story of Dumbo is a simple one. It tells of an affable oddity who, much like Edward Scissorhands, is both embraced, mocked and manipulated by a so-called civilised society. Given the 1941 original’s feeble 64-minute runtime, it seems understandable that the story is extended and the human characters are given more freedom.

Within the human cast is Colin Farrell’s damaged war veteran Holt Farrier, which, as a lead, surprisingly, based on Farrell’s previous work, never truly finds it feet. This partially results from a compelling link between his defaced otherness and Dumbo that is unfortunately never interrogated and seems somewhat censored.

Fortunately, the supporting cast do provide substantial welly. Eva Green’s trapeze artist Collette, though occasionally superfluous, is captivating and, in many ways, conveys the aura of a classic femme fatale. Also carrying a presence is Michael Keaton’s enthralling entertainment mogul V.A. Vandevere who, unlike Hugh Jackman’s Barnum in The Greatest Showman, couldn’t be further from being a showman. Instead, he’s money-grubbing and sets his financial heart on acquiring the Medici circus for his Dreamland theme park, which tilts excruciatingly close to Disney’s own recent monopolistic acquisition of Marvel, Lucas Film and 21st Century Fox. When Keaton and Danny DeVito’s Max Medici are positioned in the same scene, the film gains a captivating depth. Two manipulative con-artists who are both similar and antithetical. Batman and Penguin faultlessly reunited.

This reunion is supplemented with a gorgeous production design that both absorbs audiences and provides a critical distance to gaze at the manipulative nature of individuals and conglomerates. This harsh world is juxtaposed with Dumbo himself, who is rendered beautifully and is unbelievably cute with mammoth floppy ears and overwhelmingly, compelling eyes that perfectly evokes the Dumbo of the original and will ensure children are desiring Dumbo plush toys for many, many years to come.

Whilst Dumbo exceeds expectations, Timothy Q. Mouse’s, the anthropomorphic mouse of the original, removal (or replacement with a small non-speaking white mouse) is disappointing and peculiar – particularly as it means a vital theme of the original is largely lost – that being: whether you’re the biggest mammal or the smallest, you’re important. It also means the emotional impact of a number of the sequences from the original are essentially adrift. The pink elephant sequence feels cold and lacks the bubble-riding joy of the mouse. And the heart-wrenching baby mine scene feels insignificant. The original, tender tale of an elephant finding its place in the world despite its otherness and faults seems to have vanished and is consumed by the human-dominated, manipulative world that this film tries so hard to critique.

Despite compelling performances by many of the supporting cast and a CGI adorable elephant that will make you scream with delight when it takes flight, the film disappointedly lacks the magic of Disney and Burton. Dumbo doesn’t deserve to be consumed by darkness. But one can’t help for the boundary-pushing, eccentric Burton that was originally fired from Disney in the 1980s. Instead the live action re-imagining feels underwhelming, safe and unlike Dumbo, never completely takes off. We can only hope that the remaining re-makes do.