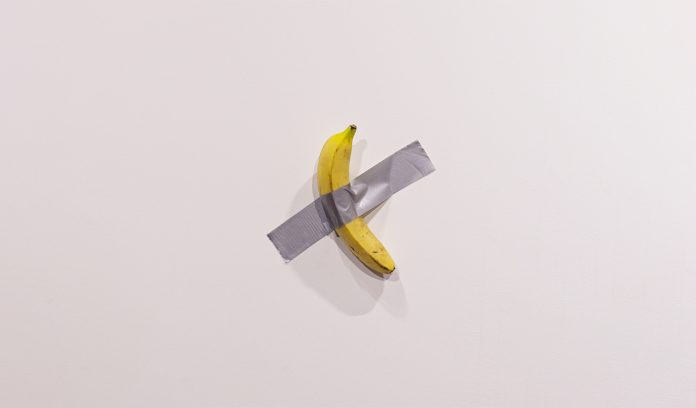 People lose their $#*! every time the art world does something crazy. This time Italian artist Maurizio Cattelan created a piece of artwork named Comedian, and it merely consists of a banana being ducked tape to a wall. It’s valued at £90,000.

So, how can a banana be worth so much, when a banana from the local shop costs about 15p?

Well, art collectors Billy and Beatrice Cox, who bought the piece for around £90,000 last week, stated, “When we saw the public debate (the Maurizio Cattelan piece) sparked about art and our society, we decided to purchase it. We knew we were taking a risk, but ultimately we sense that Cattelan’s banana will become an iconic historical object.”

Looking it at the purchase from that point of view I can see why someone would want to buy this piece of art. It’s an investment. Some people even have compared it to Warhol’s Campbell Soup Cans in terms of the reactions it’s receiving — but at least there is some creative visibility in Warhol’s piece.

Just a few days ago it was destroyed (eaten) by a performence artist. But it was replaced with a new one, gallery director Terras told the Miami Herald: “He did not destroy the art work. The banana is the idea.”

Maurizio Cattelan became known back in 2016 when he created America, a fully functioning toilet made out of 18-karat solid gold. The piece was stolen in 2019 from Blenheim Palace.