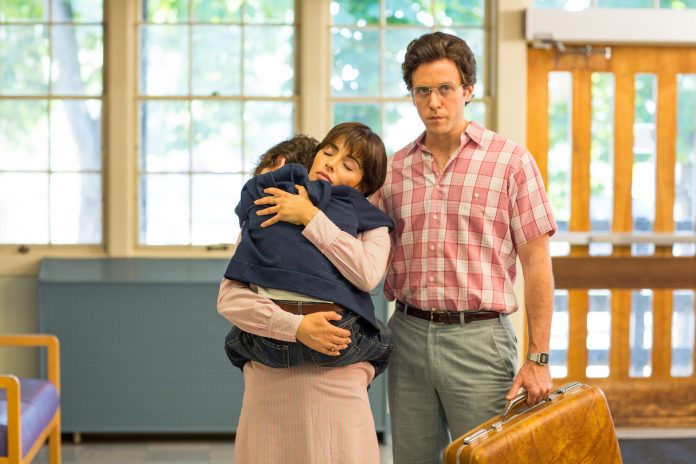 Though adapted from Stephanie Kallos’ 2015 novel of the same name, Language Arts immediately feels like a staggeringly personal effort from writer-director Cornelia Duryée (The Dark Horse, Camilla Dickinson), who infuses a lot of her own experiences into this heartfelt and sensitively drawn drama. The film is centered around Charles (played by Ashley Zuckerman, bearing a striking resemblance to a young Hugh Grant), a high school English teacher who, despite having an excellent grasp of the English language, nevertheless struggles to connect with those around him, namely his ex-wife, Allison (Sarah Shahi), and his autistic son, Cody (Kieran Walton). But when one of his students presents him with an idea for a photojournalism project (or, as she puts it, “photolanthropy”) documenting the lives of autistic youth and senior dementia patients, Charles reflects back on his own childhood, and all the ways in which moments from his past have shaped him into the person he is today, and the person he could become if he could just pull those pieces together.

In a crucial moment during Charles’ school years, Mrs. Braxton (Jane Ryan) explains the meaning of the word “protagonist” in one of her Language Arts classes. However common, we quickly realize that this simple definition of “a hero that we root for” is quite reductive, and barely even applies to the movie’s own complicated protagonist, or at least the adult version of him, who becomes increasingly despondent and ill-natured. But the young, reticent Charlie (Elliott Smith), still driven by a kind of innocent idealism, is helmed as a hero when he strikes an unlikely friendship with Dana (Lincoln Lambert), an autistic child who’s constantly made fun of. After all, he’s familiar with that feeling – being the teacher’s pet has put him in a not too dissimilar position.

As a parent, however, handling his relationship with his autistic son and the effect it has on his marriage proves to be an altogether different task, and we see him fall deeper into despair and hopelessness, which is nicely evoked through the shift in lighting. Duryée competently alternates between the different timelines (and time periods), tracing Charlie’s life in a way that sheds light into the full spectrum of his personality, which could have easily come off as flat or even unlikable. Ashley Zuckerman’s performance also provides further depth into his character, peeling off the layers of empathy beneath what might be interpreted as exactly the opposite, while Elliott Smith wonderfully demonstrates young Charlie’s maturity even at such a young age. It’s the supremely talented Lincoln Lambert as Dana that steals the show, however, as he captures the mannerisms of his character’s disability with truly impressive nuance, despite being neurotypical himself.

The story of Language Arts is touching on its own, but the treatment it receives in this adaptation elevates it into something deeply moving. This is largely thanks to Cornelia Duryée, who, as an artist with disability and mother to an autistic son (who appears in the film, and to whom the film is dedicated), has clearly poured her heart and soul into this project. One of the ways this becomes evident is the fact that the film ultimately reveals itself to be not about autism, but about unspoken love and the different ways in which it manifests itself. The irony, of course, is that the art of language, to which Charles dedicates his life to, proves to hardly be limited to the written word, and that a repetitive circular motion or the utterance of an unintelligible sound can be just as meaningful as any one of his eloquent sentences. And that turns out to be the key to solving Charles’ communication problems: sometimes, it’s not about saying the right thing, or saying anything at all, but about reconnecting with your own self and those around you. One of the final pieces Charlie’s protege presents has this beautifully profound quote attached to it: “You babblers may well rule the earth, but heaven’s the kingdom of the mute!”

The Best Songs Featured in HBO’s Euphoria (So Far)