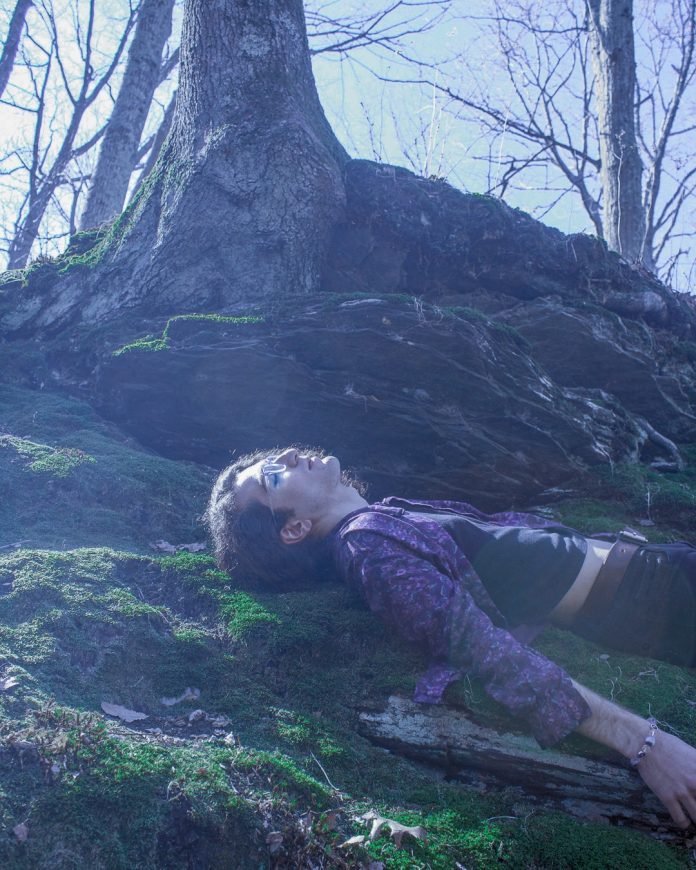 Lo-fi bedroom pop singer-songwriter Unstabile’s music shimmers with lush synth textures and an intimate vibe that evokes Blood Orange’s blend of free-flowing, snippet-style R&B with DIY indie production. Following their 2019 LP A Drop in the Stream, the artist has just today graced us with a new EP titled Glimmers, written, composed and produced in its entirety by Unstabile. Highlights including the opening track, ‘Falling’, a hazy, ethereal tune glistening with a wonderful vocal melody and night-time jazzy synths, or the breezy, hopeful ‘On My Way’, where Unstabile calmly proclaims: “And I feel like I’m on my way/ Being right here feels okay.” Fittingly, the record feels like a glimmer of light in a dark room.

We caught up with Unstabile for this edition of our Artist Spotlight series, where we showcase up-and-coming artists and give them a chance to talk a bit about their music.

When I was a little kid I was so inspired by visions I experienced while listening to music, and it made me want to make movies based on what I saw in my head.  But before too long that just turned into me wanting to make music, and let people have their own visions with it.  Once I had an ipod, I looked forward to bus rides to school where I could listen to music and daydream before having to arrive at all the shit you deal with at school.  Music was this space of emotional understanding, caretaking and communication, and so I wanted to be a part of that and reach people that way.  I didn’t know that many creative people growing up, and I guess I kept a lot of it to myself.  I took lessons and did chorus and occasionally made some things, but it wasn’t really until sometime in college that I started making a lot more.  I did it almost compulsively after class and stuff, just messing around.  Now I really see it as something like water, it’s just something that I need…expression being part of day to day life instead of this separate thing.

Well, in general there’s so much music to be inspired by and that I have been inspired by over the years it’s hard to even account for…These days I’ve listened to a lot of Liv.e, MIKE, Solange, Earl, and a lot of jazz pianists, like Ahmad Jamal and Alice Coltrane, to speak of just a few artists who I love, but wouldn’t be seen clearly as an influence in my music.  I would say that in recent years, some of my biggest influences have been people like Blood Orange and (Sandy) Alex G, as a songwriter. They’re both pretty different from one another of course, but in my mind they share an intimacy and a sort of demo-like, and yet totally genius and refined, homemade sound.  And one that isn’t easily pinned down.  When I got into Alex G, I found myself so inspired by how far and how beautifully he was able to take a lack of technicality on the recording side (using garageband and a usb mic), and a simplicity on the music side .  It kind of awakened the kid in me who wanted to make music and wasn’t worried about being polished or cool, or worried I wasn’t good enough at my instrument or at producing yet.  It was just like, oh, I can do this and just be me.  Thankfully, this accessibility and homecooked-ness is true of a lot of great artists of all different kinds today.

What were some of the ideas that went behind your EP Glimmers?

The project sort of emerged on its own, but at the time of making it I had begun thinking more about how to be devoted to music, how to show up for it and for myself better.  I was dealing with the idea of how thinking can really hold you back and make you feel bad if you’re not careful.  There’s a lot of inattention and distraction that prevents growth, or as I was noticing, prevented me from appreciating my growth.  Like, I’d make a track and unconsciously assume it wasn’t good, or I’d just forget about it, and then show it to someone else or come back to it later and be like, why do I keep telling myself I haven’t made anything recently?  Why do I assume that it’s not good before I even give it a chance?

So there was this idea of trying to notice and broaden the light I experienced in life, however faint it may have felt, and to be carried by that.  Like a light dimly illuminating an otherwise dark space in time…processing some feelings in short songs.  By the end of it I had this idea of trying to hold hope and despair together in the music, instead of seeing them as in opposition.

I was putting time into music after work, in my bedroom, like usual, and trying to be more consistent.  I was going through a bit of a tough time and really recording was just my way of staying present and checking in with myself.  It was a lot of finding inspiration in playing little things on the bass, and layering it and/or pitching it up, just keeping it simple with harmony in part due to being less familiar with the instrument than I am with keyboards.  For the most part, tracks were pretty spontaneous, and were recorded within a day or 2.   It was a cold and quiet time, and with that there was a gravitation towards ambient, at times sparse, slow burning tracks.  At the same time, I was trying to be concise.  I wanted my vocals, when lyrical, to feel more directly expressive, even if they weren’t put at the forefront of the mix.  It was a time of growth, a lot of which manifested in demos and songs that aren’t actually on this project, but pivot me towards more songwriting and whatever else is next.

It’s kind of up in the air right now, but I really have plans to deepen my creative practice and  flow anew. I know I want to develop more musical relationships and move to a new place, and continue learning life, while also facing this fucked up, shifting world.