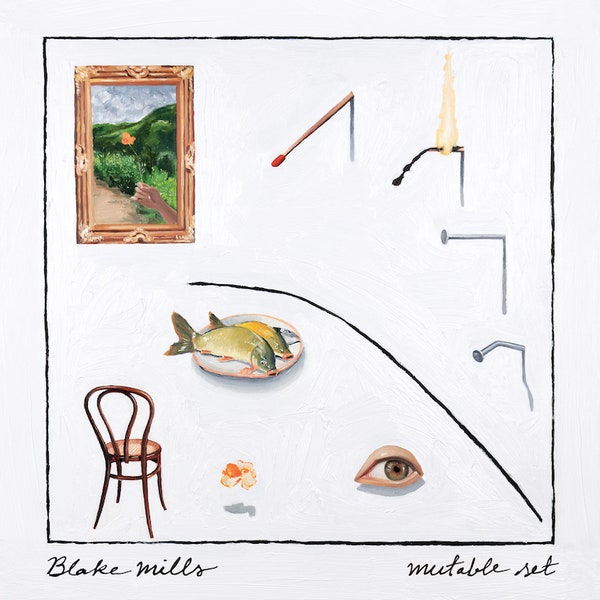 Despite his attention-grabbing virtuosity, Blake Mills was always comfortable not being in the spotlight. Having begun his musical career as one half of Simon Dawes, he went on to become a touring guitarist for Jenny Lewis, before making a name for himself as a session musician, collaborating with a wide range of artists from Conor Oberst and Jesca Hoop to Lana Del Rey and Dangermouse. Even his debut solo LP, 2010’s Break Mirror, was made with the intention of securing more session work. As a producer, he continued showcasing his artistic versatility, most notably on Alabama Shakes’ Grammy-nominated 2015 album Sound & Color and Perfume Genius’ expansive No Shape, both of which broadened and recalibrated the artists’ approach – which is exactly what Mutable Set sets out to do for his own sound.

The fact that Mills’ latest solo effort finds him coming into his own as a songwriter almost goes without saying. As solid and occasionally brilliant as some of his prior solo work has been, Mutable Set immediately stands out for presenting a more refined, coherent vision that’s both wondrously amiable and disquietingly compelling. Any number of these songs could easily find themselves on some kind of ‘chill folk’ Spotify playlist, to be enjoyed as nothing but a soothing background presence; but the album also rewards more attentive listeners by offering multiple layers of nuance within its impeccable compositions and poetic lyricism.

Yet it’s the album’s understated nature, that sense of earnest unpretentiousness, that makes it such an inviting listen. In a genre that’s often centered around the persona of the artist rather than the music itself, Mills has crafted a defining body of work that captivates with the sheer beauty and warmth of its recordings. From the Elliot Smith-like waltz of ‘May Later’ to the late-night romanticism of ‘Window Facing a Window’, Mutable Set has you floating along mellifluous, delicately-drawn arrangements, like tender waves on a quite shore. That’s not to say that Mills’ voice lacks presence; but it’s exactly that unimposing, intimate quality that makes for the perfect companion on this idyllic musical journey.

But there also clouds looming over the album’s subtly pristine soundscapes, which makes Mutable Set so much more than an escapist folk record. One tide rises higher than the rest – album centrepiece ‘Money is the One True God’ builds slowly, as if ascending to the heavens, as Mills delivers a darkly sour commentary on capitalism and religion. Discordant keys and ominous synths gradually enter the mix, culminating in a hair-raising crescendo that triggers something vile and disgusting in you, like a moment from Mark Koven’s soundtrack for The Lighthouse. Follow-up ‘Summer All Over Again’ covers itself in a more gentle exterior, but there’s still a sense of dread boiling underneath – which is fitting, considering that it is, in fact, a song about global warming (“No movement/ No future/ No past”).

Credit must also go to Cass McCombs, who helped write a big chunk of the songs on Mutable Set, giving them that darker edge. Another Mills/McCombs collaboration, ‘My Dear One’ might first come off as a simple love song, but there’s an undercurrent of uncertainty running throughout: “Whistle in the dark with me,” he sings in a near whisper, as if addressing you, the listener. The same sentiment drives opener ‘Never Forever’, which starts as an almost ambient piece left over from Mills’ 2018 EP Look before a fingerpicked guitar emerges, Mills searching for “some place we could go/ where forever waters flow” to escape the mundanity of modern life. But even as sublime cuts like the instrumental ‘Mirror Box’ seem to offer exactly that, there’s always a sense that we’re still trapped in that grim reality.

It’s hard not to relate that feeling to the current state of things, especially with songs like ‘Farsickness’ and ‘Window Facing a Window’. The former is a glistening piano ballad about yearning to go somewhere far away, to break out of the confines of the home, conjuring up images and memories as tangible as they are endless. ‘Window Facing a Window’, on the other hand, evokes a more direct kind of emptiness: “A bedroom with a bed that isn’t there anymore/ The air that holds, the breath, the sun across the floor/ A catch of crumbs that you can’t do without anymore/ The orange peel, the apple core,” he sings amidst soulful, unearthly melodies. As bleak as it may sound, there’s a strange kind of comfort to be found on Mutable Set; it’s an album that acknowledges the direness of things even as it does everything in its power to create something more than just a pleasant distraction, a place to bask in, even if only for a while.

Album Review: Blake Mills, 'Mutable Set'Despite his attention-grabbing virtuosity, Blake Mills was always comfortable not being in the spotlight. Having begun his musical career as one half of Simon Dawes, he went on to become a touring guitarist for Jenny Lewis, before making a name for himself as a...