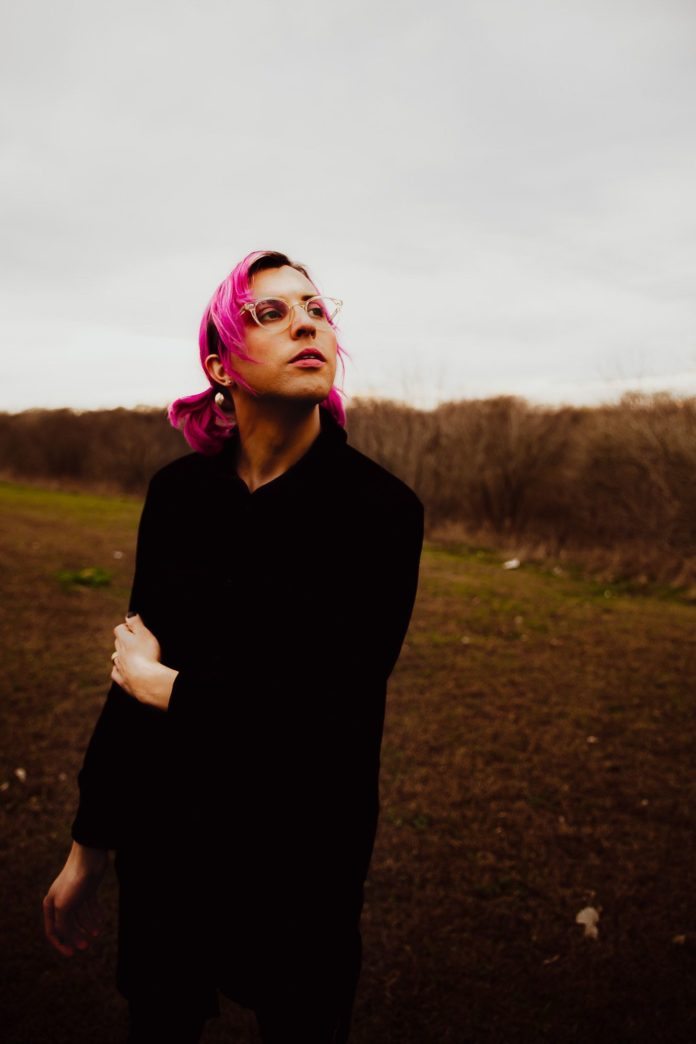 More Eaze is the moniker of Austin-based producer, composer, and multi-instrumentalist Mari Maurice, who mixes in elements of experimental pop, 00s glitch music, and AutoTuned automatic writing. Mari, their latest release for Orange Milk records, is an introspective yet dynamic collection of tracks exploring the duality of the self, reflected in the juxtaposition of off-kilter, sometimes disjointed instrumentals and more direct, conventional-sounding moments like highlights ‘talk’ and ‘i don’t wanna’. Mari has a knack for melodic, punchy pop songwriting as much as fluid, abstract compositions, which not only showcases their versatility as an artist but also works in favour of the album’s thematic core. Ever-evolving cuts like ‘apart’ feat. DiamondSoul and ‘progress in therapy’ feat. Claire Rousay evoke a state of constant flux, like a disembodied form being endlessly molded but never fully contained. As the record progresses, tracks like the expertly titled ‘gender dysphoria trauma bonding’ and ‘how do you have a friend when you’re transitioning in your thirties’ reveal a more vulnerable side of Mari, accompanied by spacious, dreamy production. As if this defining statement of an LP wasn’t enough, the artist went on to release another record just this week titled towards a plane, taking those more meditative, ambient qualities of Mari and expanding them into a full-length record, one whose soothing atmosphere is the perfect antidote for these uncertain times.

We caught up with Mari Maurice for this edition of our Artist Spotlight series, where we showcase up-and-coming artists and give them a chance to talk a bit about their music.

I started making music when I was pretty young – I was pretty equally into classic rock and punk pop as a really young kid and had supportive parents who really encouraged me to take lessons on a lot of instruments. As far back as I can remember I primarily wanted to make things. In retrospect, learning all these instruments as a kid was really a means to an end with songwriting and expression. A few records that I remember being really pivotal when I was young were Play by Moby, Yankee Hotel Foxtrot by Wilco, Lifted… by Bright Eyes, God, Ween, Satan by Ween, and the Day They Shot a Hole in the Jesus Egg by the Flaming Lips. I can remember listening to those albums in particular and feeling like I could make music that sounded like that. At 12-13 years old, I would do things like slow down the extremely shitty sound recorder app on the family computer so I could record an entire 2-3 minute acoustic guitar/voice song on it and then record like 5 minutes of radio static and guitar feedback as separate audio files without listening back to the actual song since this rudimentary program didn’t allow overdubs. Then I’d try to mix all those sounds together because I was just so obsessed with figuring out how to create the collage type of elements all those albums have.

How has your approach to songwriting changed over the years?

My songwriting ideas used to be pretty fully formed off the bat. I used to write music and lyrics almost directly in tandem but gradually things have changed where typically there’s a lot of improvisation and editing that goes into the music before I even consider writing a melody or words. Production and timbre have really become an integral part of the writing process for me. A lot of tracks begin as improvisations or small little loops. Bringing in contingency and outside collaboration has also been really important to me as well. Basically, finding ways to constantly challenge myself with writing and recording so that I don’t fall into repetitive tendencies.

Could you talk about the inspiration behind Mari?

Mari was inspired by a lot of things both in and outside of music. I fully transitioned from the start of the recording process to the end of it and obviously that experience really affected a lot of the writing. I found so much comfort in pop music during this time and fell even deeper in love with everything in the PC Music/Hyperpop world. I love music that pushes boundaries but still manages to be playful and fun while doing so. Generally speaking, I am constantly striving to make music that is challenging, strange, and sad but that manages to remain beautiful, fun and whimsical while exploring complex emotional and musical terrain. As such, a lot of work that fits that criteria really influenced the making of this album-things like albums by my Orange Milk labelmates, the Lovely Music Ltd. catalog, artists like Jim O’Rourke, Organ Tapes, 100 Gecs, the whole drain gang/Year 001 scene, etc…

Do you feel that the album is more of a defining statement for you – thus the title Mari? How did that affect the writing process?

It definitely is more of a defining statement! I worked on this record on and off for around 3 years. I worked on a lot of smaller projects during that time as well but production for Mari was going on continuously throughout that period and a lot of the other releases really informed the making of this one and vice versa. Lyrically, these songs are by far my most personal and direct and musically it feels like the first time I have captured a real synthesis of everything I’m interested in. I didn’t necessarily know it was going to be a defining statement when I started work on it. I wrote and recorded a couple of songs early on without having a goal in mind and they just kind of stuck so I kept writing and editing more and more.

A big part of working on almost any record for me is having a period where I hate everything I’m doing and almost give up before coming back to the material reinvigorated. The recording process for this album definitely had multiple moments like that. I recorded 4-5 versions of some of these songs and did dozens of mixes of each version in several cases. About halfway through it became clear that this album was shaping up to be a really important work for me. In addition to being my first solo release as a girl, it also really represents more of a shift in focus in how I want to approach music in the future. It also allowed me to refocus on the fact that so much of what I do comes from pop music even when it’s super fragmented and abstracted. It really feels like a true acceptance of myself as a human being and as a composer.

Could you talk about the collaborations with DiamondSoul, Claire Rousay, and Amulets that appear on the album?

Claire Rousay is one of my best friends and we record/perform together pretty regularly. We made a full length duo record that was released earlier this year on Mondoj and both contribute to each others’ solo recordings as well. She’s one of my favorite people to work with in any context as well as a friend who has really been there for me in a lot of different ways over the years so I knew that I wanted her to be involved in the making of this album. She’d been doing this very rhythmic textural ASMR layering in both her solo recordings and during our recent live performances together that I definitely wanted to integrate into a song. She really brought another layer to “progress in therapy” in both a sonic and ontological way. She’s an expert at finding extramusical sources and creating these whole other worlds of meaning through them.

DiamondSoul and I are label mates and have admired each other’s work from afar for a while. Serendipitously, we were both working on our new records at the same time and posting a lot of clips on instagram and started losing our minds over our respective new material. At some point I proposed working on some tracks together and Alex was immediately on board. I first collaborated with him on a track for the incredible forthcoming DiamonSoul record and then sent some material of my own for him to work with. In both cases, the tracks we sent each other had a lot of space to work around and it was really amazing to get super detail oriented and essentially carve out an arc together. I’ve always felt a strong kinship with Alex’s work and the way he tries to incorporate a lot of diverse influences into his music in really subtle and interesting ways.

Amulets and I lived in Austin together at the same time for a while but weirdly met for the first time when we both played a music festival in Denver. We immediately bonded because we were both really entrenched in the tape label community at the time and it was really exciting to meet someone who was working with a lot of the same people in different ways. We did a few collaborative sets while living in Austin that were truly wild- I remember one where we both just played heavily processed toy keyboards. Amulets is a true master of creating an instant mood and has a pretty incredible repertoire of sounds. The track they contributed to on “Mari” was one of the songs I struggled the most with. I had recorded several versions of it and finally I thought “this really just needs something beautiful and swirling anchoring it.”. I wrote Randall and asked if he could send me some guitar loops/tracks in A mixolydian and I think he sent me files within like 2-3 hours that were absolutely perfect and completely grounded the track. We’re finally moving forward with some other exciting collaborative tracks and ideas after working together on this one.

Funnily enough as I write this I have a new tape called “towards a plane” out on Aural Canyon today! It was recorded over the last year and is a very different release from “Mari.” It’s much more muted, calm, and essentially an “ambient” record for lack of a better term. It’s a release I made during a year of intense change between transitioning, moving, and changing jobs 3 times amongst other things and these tracks are attempts at creating a sense of calm/stability in the midst of a hectic and uncertain year. There are a lot similar sonic elements to “mari” but everything is much more placid and disembodied.

In addition to that release, the rest of this year is looking like it will be filled with collaboration. I’m in the process of finishing a really wild record with Nick Zanca and have several other collaborative projects that are all in various stages of completion. I’m also hoping to finish a new tape with my project Fibril and to do some shows virtually and possibly IRL depending on how the current pandemic plays out. I’m slowly working on a new more eaze solo album too but I do not know when that will be finished. In general, I’m trying to work in a more patient/focused manner to really deliver the best work I possibly can with any project.