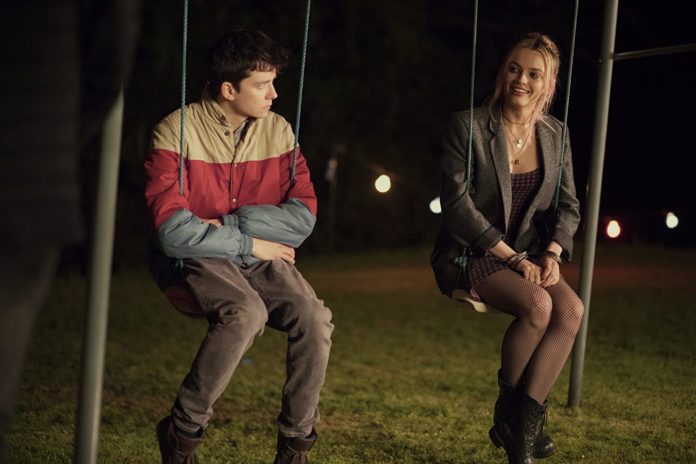 Netflix’s Sex Education (2019 -) is a British comedy-drama that follows Otis Milburn, a sixteen-year-old virgin, as he sets up a sex therapy clinic at school with Maeve Wiley, a very smart, well-read social pariah who needs money to pay rent. The series finished its second season not long ago. To remind us of the brilliance that Sex Education brings, we have selected five empowering moments from the series.

Back in Moordale, Adam gets a job and impresses his boss by taming his dog—Adam’s first achievement in the series. He helps his parents, even washing his dad’s car, but Groff is irritated that Adam is doing this when he needs to leave for work. As to his job, Adam is fired when the shop is ransacked the morning after he was allowed to lock up.

Ola—Moordale student, Otis’s ex-girlfriend, and Adam’s fellow employee—shows up and says the lock was already faulty, so their boss fires them both. Adam is confused as to why Ola defended him and she explains it’s because he’s her friend. He says that nobody has ever called him their friend, then hugs her.

After struggling for so long to accept and love himself, Ola sees Adam as a boy who’s trying his best. Ola is new to Moordale, so unlike Adam’s other peers, she doesn’t have the weight of his past mistakes to cloud her judgement. This proves that Adam has truly grown over the two seasons. Ola’s words help him embrace his identity and stand up to his father.

Eric And His Father Make Amends

Eric’s father often expresses concern over his effeminate mannerisms. When Eric and Otis plan to see a musical production of Hedwig and the Angry Inch for Eric’s birthday, Mr Effiong almost stops Eric from leaving in his costume.

Unfortunately, Otis doesn’t end up going because he gets caught up in a sex therapy debacle with Maeve. Eric feels vulnerable on his own, and his paranoia distracts him so much that he doesn’t notice someone steal his things at the station. He walks home in the dark, where two men beat him up. Mr Effiong’s concern proves to be warranted, and Eric tones down his vibrant outfits and personality.

On the morning of the school dance, Eric sees a man on the street whose nails he describes as “fierce”, and he’s inspired to embrace his identity. Before the dance, his dad asks if he’s sure he wants to go in dressed as a woman. He explains that he struggles to fit in as an immigrant, but Eric stands his ground. “Your fear doesn’t help me, Dad. It makes me feel weak.” Still, his father worries that he’ll be hurt, but Eric replies that he’ll be hurt either way, so wouldn’t it be better to be himself?

Someone honks at Mr Effiong to move his car, but he yells at them to wait. He turns back to Eric and says, “Maybe I am learning from my brave son.”

Watching this whole exchange is Adam. He attempts to tease Eric, but he’s no longer afraid of this boy who bullied him for years.

In the school’s musical production of Romeo and Juliet, Florence stars as Juliet opposite Jackson Marchetti: Maeve’s ex-boyfriend, Moordale High’s Head Boy and most popular student, and a swimming champion who suffers from anxiety. Florence’s friends tease her that Jackson will have sex with anyone, so she better get in quick. But the constant reminders of sex make her uncomfortable. She schedules a sex therapy session with Otis, but he mistakenly believes that she feels insecure about falling behind her peers.

Otis’s mother, Dr Jean Milburn, has been invited to Moordale High to observe the school’s sex education curriculum and set up a counselling office to get a better idea of what the school needs. Florence comes in to see her after receiving Otis’s unhelpful advice. Jean gently asks Florence if she’s heard of asexuality. Florence worries that she won’t be able to fall in love, but Jean reassures her that romance is possible without sex. When Florence confesses she thinks she’s broken, Jean replies, “Sex doesn’t make us whole. And so, how could you ever be broken?”

Aimee Gibbs is Maeve’s best friend. Early in season 2, Aimee decides that she wants to be a baker. She makes a cake for Maeve’s birthday and is carrying it with her on the bus to school when a man ejaculates onto her jeans. Nobody says or does anything, thinking she’s made it up or exaggerated the incident. At first, Aimee is only indignant and upset that he ruined her jeans. Maeve insists on taking her to the police station, where Aimee feels she’s wasting everybody’s time and keeps saying that it’s not a big deal. As the season continues, the trauma of the event slowly creeps up on her. She stops catching the bus and making physical contact with her boyfriend.

Towards the end of the season, the girls (Aimee, Maeve, Olivia, Viv, Ola, and Lily) receive a detention when their teacher finds them standing before a slander painted on a bathroom mirror in lipstick. When no one admits to the crime, she sets the girls the task of writing an essay about what binds them together as women. The girls can’t settle on anything, and Ola and Maeve end up bickering about Otis. In the background, Aimee starts crying and yells at them to stop fighting. She finally admits that she can’t get on the bus, and the girls all reveal similar stories of their own. In the end, the teacher finds the true culprit. The girls tell her that the only thing that binds them together is “non-consensual penises”.

After detention, they’re reluctant to part, so Ola suggests an activity for them. They go to a scrapyard (to which Ola was introduced by Adam) and channel their anger into smashing old junk while voicing the injustices that make them angry.

The Girls Take the Bus with Aimee

The morning after detention, Aimee is walking to school as usual, but finds the girls waiting for her at the bus stop. Maeve smiles and tells her they’re all getting the bus with her. But when the time comes to board, Aimee is hesitant. Maeve asks the driver to wait a minute and reassures Aimee that “it’s just a stupid bus”. She takes Maeve’s hand and they climb on together. The final shot of the episode is of the girls sitting together in the backseat, each with their own history of struggles, each unique in her own way. Aimee has tears in her eyes, but this time she’s smiling.