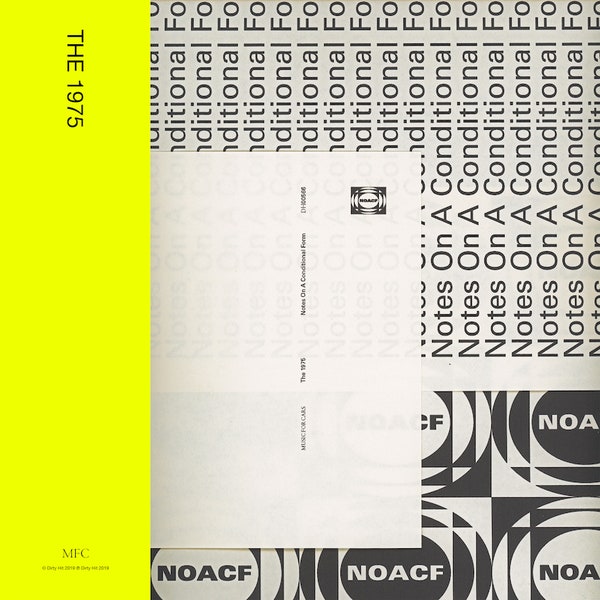 To accuse The 1975 of being self-indulgent now is to ignore the band’s entire back catalogue. The 80s-inspired pop structures of their early albums always felt like they were struggling to contain frontman Matty Healy’s urge to create something as chaotically decadent as possible, a glossy veneer ready to fall apart at any moment. The more the Manchester quartet broke free from those conventions, the more outrageously ambitious and interesting their music got, culminating with 2018’s landmark A Brief Inquiry in Online Relationships. If there was ever sense that Matty Healy was still holding back a little – it was only an inquiry, after all – on the band’s latest album, Notes on a Conditional Form, he lets all his inhibitions run wild.

The results are polarizing at best. As with A Brief Inquiry, Notes should invoke one of two reactions: blind adoration or bemused annoyance, though neither of them are entirely justified. But chances are, if you could barely tolerate or even found yourself admiring elements of the band’s previous outing, you’ll have trouble sitting through the entirety of Notes without tuning out at least once. Clocking in at an hour and twenty minutes, the 22-track album is a patently messy and directionless experiment that hops from one genre to the next with seemingly no intention other than to satisfy some half-formed creative impulse. As hinted by its pseudo-intellectual title, the album’s boundless incoherence is, well, inherent in its nature – this time, though, it’s so blown out of proportion that it loses most of its appeal.

Which is a shame, because there’s not a single track here that sounds poorly written, recorded, or mixed, largely thanks to the band’s secret weapon, drummer and producer George Daniel. Even drab, purposeless electro cuts like ‘What Should I Say’, ‘Yeah I Know’ and ‘Shiny Collarbone’ sound sleek, like they could easily fit into a solid if somewhat indistinctive electronic EP. ‘The End (Music for Cars)’ is a lushly arranged orchestral interlude that would also sound fine in a different context – just not after the ruthless, IDLES-esque punk anthem ‘People’, which itself follows from opener ‘The 1975’, an ambient spoken word piece featuring environmental activist Greta Thunberg. As a single, the track felt like a powerful statement, a promising sign of what’s to come; and even here, paired with the restless political anger of ‘People’, it hints at a more outward-looking, socially charged direction that unfortunately never fully materializes.

Instead, the record continues its genre excursions with little rhyme or reason, wandering into airy electropop (‘Frail State of Mind’), alternative country (‘The Birthday Party’), and 2000s indie rock nostalgia (‘Then Because She Goes’). By the time we reach ‘Jesus Christ 2005 God Bless America’, an acoustic cut featuring Phoebe Bridgers that sounds like a semi-parody of the Bridgers-Oberst collaborative project Better Oblivion Community Center, we’ve basically seen it all – and there are still 13 whole tracks left. The song also features some of Healy’s less-than-profound lyrics, closing off with the head-scratching line: “If we turn into a tree, can I be the leaves?”

The record’s tendency to meander wouldn’t be such a flaw if its second half didn’t explore much of the same territory they’ve already dived into with little to no variation. Take ‘I Think There’s Something You Should Know’, for instance, which might as well be titled ‘Frail State Of Mind Pt. 2’. ‘Playing on My Mind’, on the other hand, follows the same acoustic formula as ‘Jesus Christ 2005 God Bless America’, except with less of an interesting concept, though it does contain one of Healy’s more cheekily self-aware lines: “But I won’t get clothes online ’cause I get worried about the fit/ But that rule don’t apply concerning my relationships.”

Notes peaks with ‘If You’re Too Shy (Let Me Know)’, the band’s most commercially successful single in a while – which is ironic, considering it’s about being infatuated with a girl he met in an adult website. Featuring an appearance from FKA Twigs, it’s an infectiously upbeat tune most reminiscent of the 1975s’ typical sound, complete with tongue-in-cheek lyrics and a euphoric sax solo. But as Healy himself said in an interview, “it’s another completely different tone to the album and it kind of comes out of nowhere.” Which proves that, again, this is all part of the point – like A Brief Inquiry before it, Notes is intended as a reflection on our increasingly shortening attention spans, and in that respect, its stream-of-consciousness flow gets the point across fairly well. It’s just not the definitive masterpiece it tries and very well could be.

That said, the album rewards any listeners who stay up until the very end, as it closes off with two of the band’s most heartwarmingly earnest moments. ‘Don’t Worry’ is a heartfelt, lullaby-like collaboration with Healy’s dad, who wrote the song when his son was just a toddler; but it’s ‘Guys’ that’s the real stand-out here, an unashamedly sentimental love letter to the frontman’s bandmates that is sure to become a fan favourite. “The moment that we started a band/ Was the best thing that ever happened,” he croons amidst nostalgic keys. It might strike an entirely different note from the album’s opening – which wouldn’t be such a problem if there was any sense of an emotional arc running throughout – but still, it’s proof of just how affecting the band’s music can be when they shed some of those layers of irony, when they embrace those metamodern qualities Healy is so fond of. By striking that balance between self-awareness and emotional sincerity, the band could make an album that’s truly transcendent, even if it’s just as unsure of itself as Notes – it just has to be a little bit more focused.

Album Review: The 1975, 'Notes on a Conditional Form'To accuse The 1975 of being self-indulgent now is to ignore the band’s entire back catalogue. The 80s-inspired pop structures of their early albums always felt like they were struggling to contain frontman Matty Healy’s urge to create something as chaotically decadent as possible,...