6 Unexpected Pairings in Netflix’s The Society 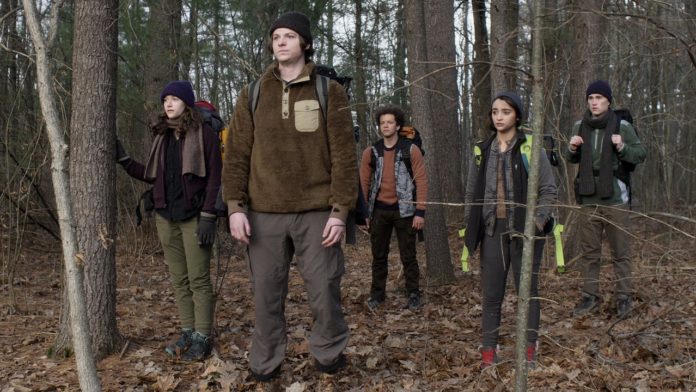 The Society (2019) is a genre-bending series that became an immediate hit among young audiences and was quickly compared to Lord of the Flies. In a town called New Ham, Connecticut, busloads of high school students set out for a camping trip, only to turn around halfway and come back home. But when they return, the town is empty. The buses drive away, leaving the students stranded with no phone reception and nobody to come and get them.

After their initial shock, they decide to throw a party, which isn’t received well by their student body president Cassandra (Rachel Keller). She asserts her power and organizes a subcommittee consisting of her more responsible classmates, but excludes her younger sister Allie (Kathryn Newton). Over time, the students form a functioning society of their own, all the while trying to figure out how to get back home since their theories suggest they’re now living in an alternate universe. Allie and Cassandra find themselves interacting with people they would never have in their normal lives, as do most of the other characters. Here are six pairings that we couldn’t imagine uniting, but pleasantly surprised us when they did.

Elle is introduced to us as a cold, mean girl who hoards on supplies and doesn’t let anyone else have their share – something that became familiar to us during the COVID-19 pandemic. Allie sees her fighting with another girl in the supermarket and decides to speak up. Elle listens to her, enraptured, and truly changes her ways.

Elle soon begins a relationship with Campbell, a confirmed psychopath. At first, she thinks he won’t hurt her but in the privacy of their home begins abusing her, mostly psychologically. When Elle finally escapes him, she doesn’t know where to go because nobody likes her, partly a result of her association with Campbell. She also doesn’t want to put anyone at risk of Campbell’s threats. The only person she trusts is Allie.

By now, Cassandra is dead, and Allie is the town leader. She listens to Elle as she reveals the abuse she suffered for months. Allie sympathizes with her and vows to protect her, putting aside any past negative feelings she held against Elle.

Before Elle approaches Allie for help, she goes to the church, which is Helena’s holy ground in every sense of the term. Helena is a good girl and designated preacher who refuses to involve herself in politics and is dating Luke, a sensitive, understanding jock. She’s very kind and seems gentle until she asserts herself.

Helena walks in on Elle, crying in the church pews, and immediately rushes to comfort her. The two girls aren’t friends and have never adequately spoken; in fact, Elle recalls a moment years ago when Helena called her names behind her back. In any case, Helena doesn’t judge and does everything she can to help Elle feel safe and comforted. She lets her stay at her house, but Elle leaves the next morning for fear of endangering Helena.

These two girls form a strange relationship in the second half of the season. They begin as rivals; Allie is politically driven, whereas Helena only ever stands for what God approves. However, they share one thing in common: their morals and intentions are in the right place. They only ever want to do what’s best for their society and to protect those they love.

Most of the season sees them disagreeing over various protocols, such as Allie’s gun law. After Cassandra is shot dead, Allie demands that everyone turn their guns in. Helena admits that she has one, but she’s keeping it for protection. Allie tells her that guns don’t keep people safe. “They get people killed,” she says. The truth is that Helena has a small armoury of her father’s guns in her garage, but nobody else knows this.
When Allie’s leadership – and the society’s wellbeing – is threatened by Campbell, Helena decides to team up with Allie and support her. She even begins giving political speeches in the church—their alliance blossoms into a friendship that’s pleasant to watch.

Kelly is a popular girl dating Harry, the school’s most popular boy. They’re two of the most privileged characters in the series, as children of the town’s richest. While Harry tries to hold onto his privilege, Kelly decides to abandon her past reputation and grow up. She starts to help people wherever possible, and one of these people is Becca.

Becca’s past is a bit of a mystery because she avoids discussing it. She discovers she’s pregnant early in the series, but won’t tell anyone about it – much less who the father is – until Kelly notices. Becca becomes defensive, but Kelly only wants to help her. She begins to do her research, which requires reading actual books since the Internet is down. She even revamps the medical center and makes it her office. The two grow close, even beginning to unlock the mystery of how they all ended up in this alternate universe in the first place.

When Kelly decides to become a doctor in this new universe, she needs some help to get her started. Gordie is a shy, clever character who begins the series in a tentative romance with Cassandra. He’s committed to helping her lead their new society and also to finding a cure for her heart condition. Unfortunately, she is killed before he has the chance to prove himself.

While Gordie puts his energies into helping Allie lead the society and find a way back home, Kelly needs his help to start a functional medical clinic. When Elle accidentally poisons everyone at the Thanksgiving dinner with a pumpkin pie, she intended for Campbell, Kelly and Gordie team up at their makeshift hospital to save the victims. The two come from vastly different social backgrounds, so seeing them unite and work so well together is refreshing.

Sam is Campbell’s brother and Becca’s best friend. He’s deaf, so not many of his peers can adequately communicate with him. Grizz is a jock and close friend of Allie’s. He sees something in Sam but is hesitant to approach him until Luke’s love for Helena inspires him.

Grizz teaches himself sign language so that he can speak to Sam in his language, but he learns British Sign Language instead of American. Yet the two boys share a connection that goes beyond words, so they form their mode of communication. Grizz would never have approached Sam if not for the new society they find themselves in. In fact, he’d planned on moving away to college without coming out to his friends. In the high school environment, Sam and Grizz would never have interacted or spent enough time together to get to know each other.