10 Most Interesting Pairings on Netflix’s The Society 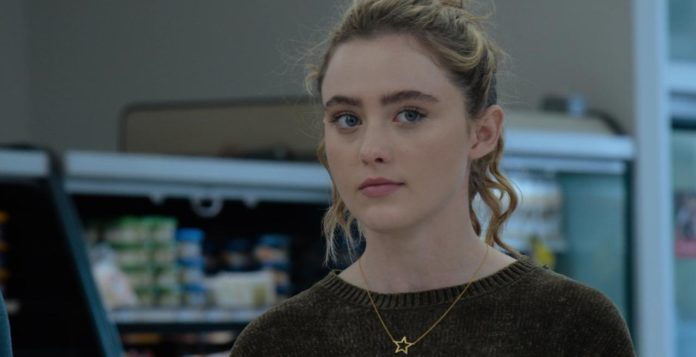 The first season of The Society was released on Netflix in 2019 to generally positive reviews and an instant loyal fanbase. The series was recently renewed for a second season, though in light of the COVID-19 pandemic, its late 2020 release may be delayed.

Busloads of high school students part with their parents as they leave for a camping trip, only to return the same day due to rainy weather. When they arrive back home, they find the town deserted. The buses drive away, leaving them alone in what they come to theorize is an alternate universe. Over time, the teenagers establish a new society while trying to figure out how they came to be there and how to get back home. In their spare time, they’re forced to interact with people they’d never spoken to before, making for some unusual pairings. Here are ten pairings that were the most interesting to see develop and evolve.

Allie is the sister of Cassandra, the school’s Student Body President who is shot dead in the third episode. After her death, Allie takes over as the society’s leader. Helena is Catholic and becomes a preacher for anyone who still attends church in the new world. She’s dating Luke, a responsible jock who is a member of Allie’s Guard. The two girls don’t always see eye to eye on political matters, though they both want to protect their loved ones.

They start the season disagreeing on most issues. Helena refuses to hand in her gun when Allie begins confiscating them after Cassandra’s death. Later, minor characters start to question Allie’s right to authority, so she decides to hold an election. Her power is threatened by some more violent, power-hungry characters, a prospect that frightens Helena. She sees that Allie truly has the town’s best interests in mind and vows to give political speeches in church, even though the principle of the act makes her uncomfortable.

When Luke and the rest of the Guard are coerced into supporting the more dictatorial candidates at the election, Helena is torn between who she should help. She and Allie have developed an unlikely alliance, and more importantly, a friendship. Helena’s position will likely be an essential arc in season 2.

When Allie’s leadership is threatened, Lexie is the main contender for the role of mayor. She is a vocal character from the beginning of the series, though mostly dismissed as overly emotional and nosy. However, when given the opportunity to voice her concerns before an audience, people listen and agree with her. She has a talent for persuading others to turn against Allie by making her look bad. However, Allie and her friends doubt Lexie’s competency to be a good leader because of her selfishness.

Lexie is guided by her emotions rather than logical thought, and Allie warns her that being a leader is harder than she thinks. In fact, Allie desperately resists taking over from Cassandra after her death. Lexie ignores Allie’s advice until she teams up with Harry, a former popular boy who has spent most of the season depressed and addicted to drugs provided to him by Campbell, a psychopath.

Campbell has control over Harry, but nobody wants to elect him, so he suggests he and Lexie become co-mayors. But instead of waiting for the election, Campbell decides to take Allie’s power by force. They arrest her, and when she gets a chance to speak to Lexie, Allie warns her that her humanity is already slipping away and that she hasn’t even noticed.

Sam and Becca are best friends despite vast differences in character. They have a unique way of communicating through a mixture of sign language, words, and facial expressions since Sam is deaf. Both have a wry sense of humour and do not fit in with most of their peers.

Early in the series, Becca discovers she’s pregnant. She doesn’t tell anyone except Sam. He tries to reassure her, but she quickly tires of his copious jokes. Becca adamantly refuses to say to him who the father is and gets extremely defensive every time someone asks. She worries about what will happen when their friends find out, so Sam comes up with a story that he is the father, even though he’s gay.

Harry is one of the most popular boys in school, and one of the most privileged. His parents hold a certain degree of influence over the way the town is run, though their role is never made clear. In any case, his family is one of the wealthiest. Perhaps this is why he’s still bitter that Cassandra was elected Student Body President, and not him. He barely tolerates her authority, but when the two get one-on-one scenes together, they share an almost flirtatious banter.

When Cassandra is killed, many are quick to assume Harry is the murderer because of his talk that he should be the leader. Though he tries not to show it, he’s affected by her death and spirals into depression. Their relationship doesn’t get a lot of screentime because of Cassandra’s death, but fans and cast members have some interesting theories about the couple. Their unique dynamic was one of the most intriguing to watch and decode.

Kelly and Gordie form an unlikely friendship, considering their contrasting backgrounds. Kelly was Harry’s girlfriend before the series but breaks up with him in the first episode when she sees him flirting with another girl. After this crucial decision, she changes much of her behaviour. She surrounds herself with different people and greatly supports Cassandra, who is struggling with the stress of being the town’s leader.

By her side is Gordie, a very smart, shy character who comes up with the theory that they’re stranded in another universe. After Cassandra dies, those who made up Cassandra’s support system are brought closer together. Earlier, when Cassandra is alive, Kelly tells her it’s alright if she thinks Kelly is silly and shallow. But as she evolves, Kelly realizes how much she enjoys helping others. She even starts a small medical clinic and Gordie helps her with research on health issues. The two make a great team, especially when their peers get food poisoning at the Thanksgiving dinner.

Another unlikely friendship that Kelly begins is with Becca. After Becca finds out she’s pregnant, she feels like she has nobody to talk to, except Sam, but Becca wants to talk to a female about it. Kelly is very observant and realizes Becca is pregnant early on. She wants to help her, saying that maybe “in this universe” she’s meant to be a doctor. The two girls develop a relationship deeper than that of a patient and her doctor. They become friends, adding some much-needed lightness to their lives – and the show.

The first episode sees the kids panicking, then enjoying the freedom suddenly thrust open them. They storm the supermarkets, loading carts with an unnecessary amount of products. Allie observes with disgust as Elle piles food into her already loaded cart.

Before the disappearance of everyone in the town, Elle was a ballet dancer. She’s closed off and maintains a very serious disposition. She’s surprised when Allie approaches her and tells her about The Poseidon Adventure. Allie wonders which character she would be – the selfish one, the survivor, the one who shuts down, or the person who helps others. This story reaches Elle, who returns some of the items.

Elle soon moves in with Campbell, Sam’s psychopathic brother. He abuses her psychologically and, later, physically. She’s too afraid to leave him, so she tries to poison him with a pumpkin pie on Thanksgiving. Her attempt is unsuccessful, and though Campbell suspects something, he never speaks on it. He now has more power over her, and she is more afraid. Eventually, she escapes. She has nowhere to go but to Allie, who protects her despite everything. 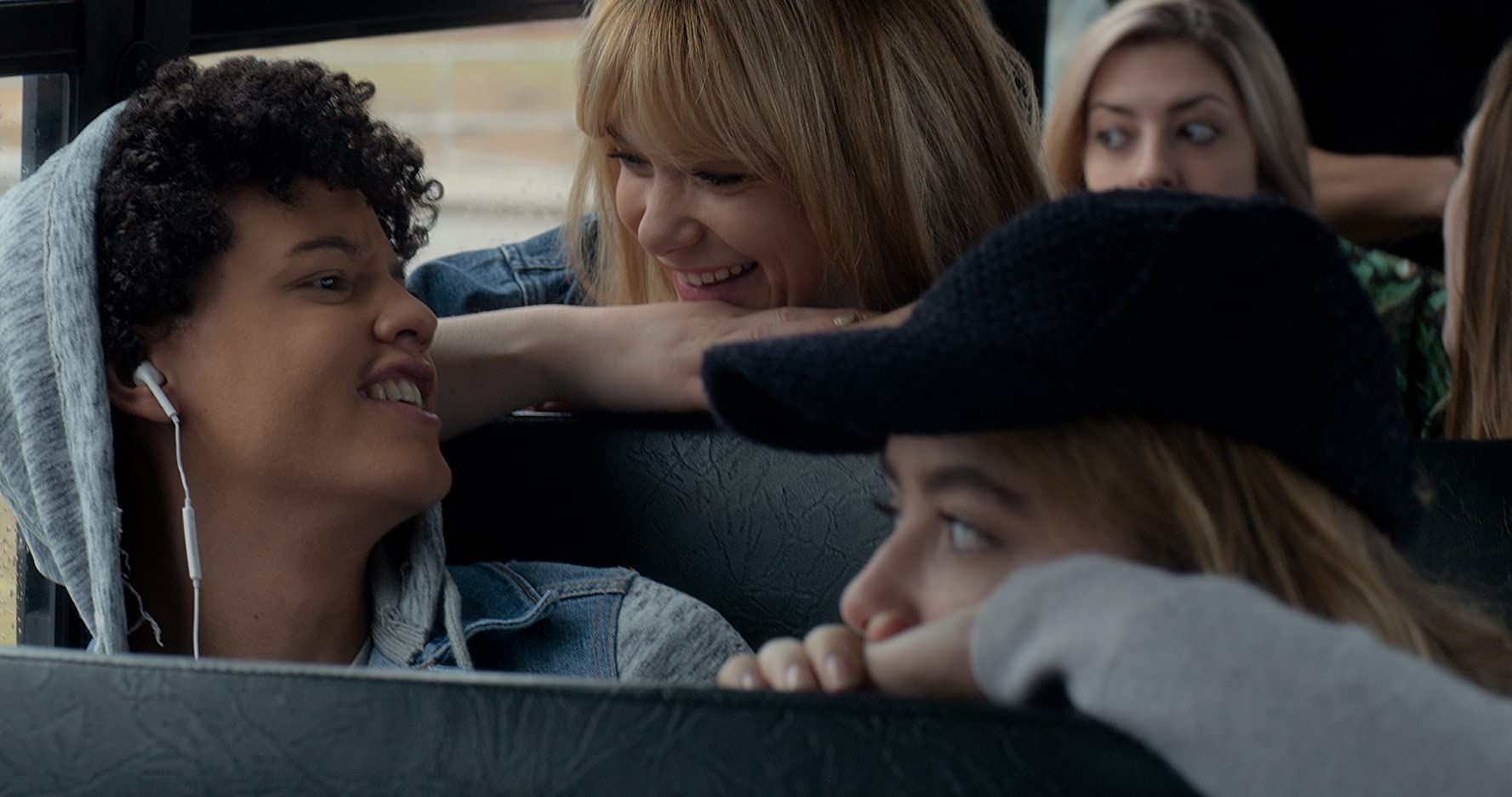 Sam is quiet and has a very small circle of friends, while Grizz is a jock who everyone seems to love. But Grizz notices something about Sam early on. He even tries to learn sign language so that he can communicate with Sam in his language, but he accidentally learns British Sign Language instead of American. As the two spend more time together, it becomes clear that they share many interests and enjoy each other’s company. They have a lot to talk about and form a unique way of communicating.

When Becca goes into labour, Sam has to tell him that he’s the father of her baby even though it’s not true. Grizz is heartbroken, but Sam is committed to keeping his promise to Becca. Neither of them knows what to do until Grizz is about to leave for an expedition to find arable land. Sam gives him Walden by Henry David Thoreau to read while he’s away. After a successful trip, Grizz returns a week later to riots in the town.

These riots are partly a result of Allie’s Guard being coerced to join Campbell, Harry, and Lexie. Luke hasn’t told Helena the truth about his decision to join their side. Because she trusts and loves him more than anyone else, Helena believes the recycled lies he’s been feeding her about Allie’s corruption and selfishness.

Earlier in the season, they decided to get married. Helena is devoutly Catholic, but the two consummate their relationship because she’s sure that they’ll be together. She also says that maybe the rules are different in this new world. Until Luke is swayed by Campbell’s manipulation, he seems like a genuinely good person who supports and respects Helena even though he’s not religious. In season 2, she will likely discover what happened, which promises an extra layer to their relationship.

This has to be the most nuanced relationship in the series. At first, Elle appears to have a degree of authority and freedom, but as Campbell gets to know her, his grip (literal and figurative) on her tightens. He learns the best ways to manipulate and scare her. He intends to keep her by his side and does everything in his power to do so. However, he also seems to fool himself into believing that she wants to be with him. Though she’s wary, at first, she really is drawn to him. The only reason she stays with him is that she has nobody else.

After the Thanksgiving fiasco, the Guard search everyone’s houses for possible poisons. Campbell notices that Elle is nervous and fidgety, so he covers for her. Neither of them ever speak about the incident, but it’s clear that Campbell suspects something and has even more leverage over her. When she escapes, he hunts the town for her and realizes that Allie’s protecting her. He thinks he’s saving her when he finally finds her and tells her to spit in Allie’s face as they’re leaving. Afraid, Elle does as he says but lets Allie know that she’ll make things right. This dynamic is sure to be one of the most interesting to watch in season 2.