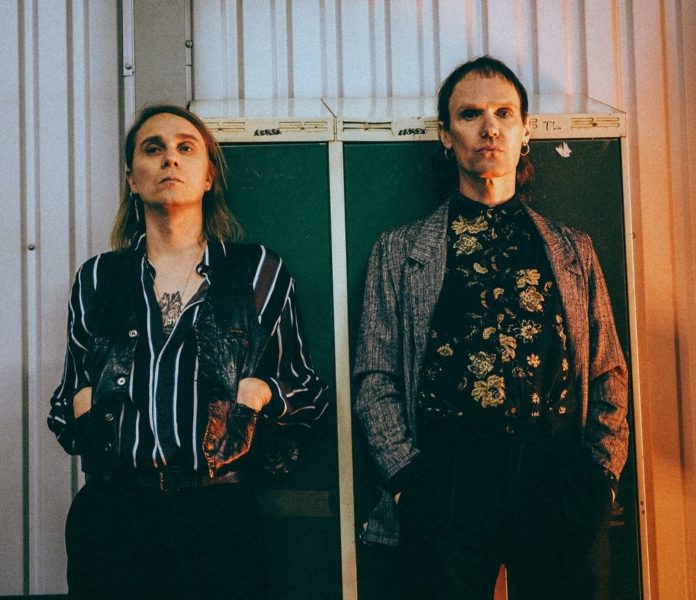 Kite are a Swedish electronic duo comprised of singer Nicklas Stenemo and keyboard player Christian Berg. Their music, both powerfully abrasive and wildly nostalgic, captures the kind of euphoric rush that’s accompanied by a feeling of slow disintegration, like the soundtrack to a world blissfully teetering on the edge of oblivion. It’s why their latest collaboration with Benjamin John Power, aptly called ‘Teenage Bliss’, hits so hard — a founding member of experimental electronic outfit F*ck Buttons also known as Blanck Mass, Power’s production gives the rapturous new track that darker edge that renders it so raucously exhilarating. With a throbbing beat and a transcendent synth line that sends the track soaring, ‘Teenage Bliss’ combines the aesthetics of 90s club music, 80s synth pop, and a touch of modern alternative. It’s one hell of a comeback after a few years of relative silence, and we can’t wait to hear more.

We caught up with Nicklas and Christian for this edition of our Artist Spotlight series, where we showcase up-and-coming artists and give them a chance to talk a bit about their music.

How did you form Kite?

N: Back in 2007 we were both working on some sort of solo projects, after being in bands since the early 90s. We met in a club when Christian told me he had some music that needed vocals. I tried, and it became our first song ‘My Girl & I’. It felt really good so we just kept on going from there.

C. We both realized that it was more fun and inspiring to work with someone else. Even if we don’t really have the same kind of influences and the same idea how to make music we realized that it worked really well to combine our ideas. It was a new way of working for both of us.

What are some of your inspirations, musical or not?

N. I’m unfortunately bad at keeping up with contemporary music. But I’ve been absorbing all kinds of great music since forever, so there is a lot to pull out from the heart when it’s time to be creative. I started in the early Swedish black metal scene, but in the mid 90s i wasn’t as angry anymore, so I found Bowie and started to be more interested in songwriting than riffs.  I’ve also, during my whole life, been listening to a lot of film music such as Michael Nyman and Morricone.

C. Yeah, film music is a big source of inspiration, but also movies in general. I started out in the goth and electronic scene in early 90s, since then I haven’t really left it. But music wise Alessandro Cortini, Spacemen 3, Brian Eno and Suicide are big inspirations to me.

Could you talk about working with Blanck Mass for ‘Teenage Bliss’?

N. That was a dream come true. Christian showed me F*ck Buttons back when we started the band, and we became very influenced by their repetitive songs and awesome sounds, we never came close to that ourselves though…

C. I work at some venues in Stockholm, booking bands etc. We had Blanck Mass a couple of times at our venue, so we started to become friends. So it felt quite natural to ask him.

What ideas went into the making of the track?

N. The song started as an attempt to make some sort of dreamy, happy/sad ”Dream baby dream” kind of song. Then when the demo was there, and we started to produce, we felt it was really hard to make it energetic. It was a good song but kind of a sleeping pill. So who ya gonna call….

C. You know we have played together for more than 12 years, it’s quite easy to end up the same. We have our tricks and ways to do music. So it was really nice to have someone with fresh ears to put some layers and programming beat to our stuff. I think he is really brave and experimental with his way of producing music and that was exactly what we were looking for. We are really happy with the result!

How does the track compare to your previous releases?

N. Well, it feels like a long time since we made an upbeat song, so that feels kind of new again. And this is the first time we have worked with someone else on the production, so that feels very new, at least for us.

C. Many people says it sounds like the really early Kite, I didn’t think about it before, but now when I’m looking back I can see their point.

N. We are gonna continue to write and release songs throughout this corona-fucked up year. We are also making a double live LP that was recorded when we played with the Swedish Royal Orchestra at The Royal Opera in Stockholm last year. And when it is legal to make concerts again, we really wanna do that a lot.

C. We also have a couple of more singles in the pipeline. It’s quite stressful to try to make an album, so we are gonna try to release music more often instead. I think its really beautiful with 7” singles, it reminds me of the time when I bought records as a kid. It wasn’t  often you could afford a full length album.