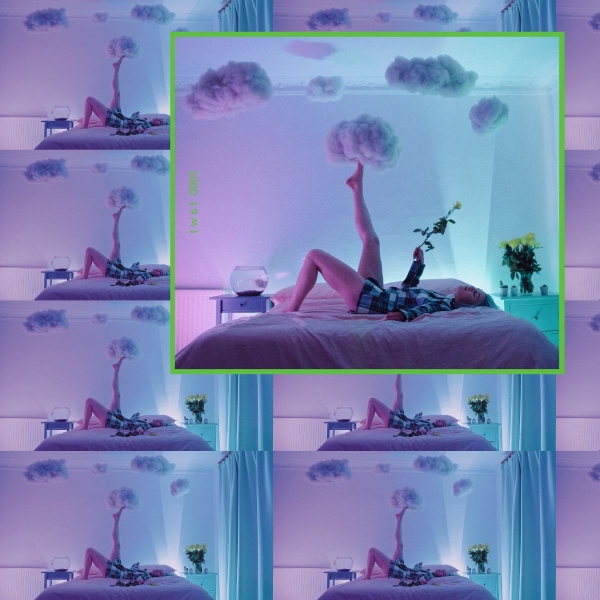 In the months before the pandemic hit, Welsh singer-songwriter Chloé Davis aka twst promoted her new songs in a series of intimate but dynamic live shows, with a small but passionate crowd of fans screaming her lyrics back at her. Of course, she couldn’t have predicted that when the time would come for her to release her debut EP, she would have to promote it by staging virtual shows from her bedroom, within the same four walls where she recorded these songs about our fractured relationship with the digital world.

Yet another layer of irony arises when you consider that the EP is out through her own label, ‘hikikomori baby’ – which, in her own words, is a reference to “the Japanese word [that] describes both the condition of acute isolation and those suffering from it.” Drawing from her own experience of living a reclusive life after leaving school and home, the EP delves into our overreliance on technology in a way that doesn’t feel trite or insipid but rather refreshing, treating it as a potential antidote to loneliness that, much like any other drug, can also be highly corrosive. In a somewhat metamodern way, it actively critiques the very same thing it sincerely embraces: “HD shows me imperfection/ But it fucks with your perception/ In your fantasy I reach to change,” she intones on the transcendent ‘Girl on Your TV’, in which she constructs the character of a sexualised girl yearning for emotional connection through her screen. “And I wish that you could talk to me/ I am more than what you see,” she belts out as the track builds to its soaring chorus.

Follow-up ‘sad girls club but u gotta be cute’ is another brilliantly post-ironic moment that deals with how perceptions of gender are distorted through the internet, this time specifically tackling the fetishization of mental illness while also serving as a depressive anthem of sorts. The EP’s most paradoxically upbeat moment, it also includes many of its most quotable lines, including “can’t write but I can type”, “heart is like a little cactus”, and the opening couplet, which twst delivers in one AutoTuned breath: “I’m just a little fishy in my room without a roomie/ Posting pictures like a cutie but embarrassed that I’m lonely.” It’s both incredibly catchy (as is practically every track here) yet also affecting, thanks to its potent evocation of a kind of generational anxiety as experienced by what she calls the “children of the web.”

The EP peaks with ‘Always’, a cleverly constructed duet with a Siri-like personal assistant in which twst explores not just how technology affects our real-life relationships, but quite literally our relationship with technology. The track, which features another one of twst’s most impassioned vocal performances, starts with her calling out for the digital voice assistant, who presents herself as “your BFF”, before seeking validation from her about her looks (When asked how it (she?) feels about her, though, the voice simply responds, “I’m sorry, twst, I’m afraid I can’t answer that.”) Unlike a lot of songs about our addiction to technology, though, ‘Always’ presents a subject that is self-aware rather than blissfully ignorant, because it’s conceived through the lens of a young artist who understands the nuances of that relationship rather than someone commenting from the outside. “I don’t feel complete without you/ And it’s probably unhealthy,” she admits, and yet she can’t help but give in.

When we covered twst’s first two singles, we described her sound as a cross between Billie Eilish and Charli XCX, and to an extent, that characterisation still stands. In fact, twst herself acknowledges the obvious Eilish comparison in her latest video for ‘Are You Filming Me?’, in which she performs a ‘livestream’ with tongue-in-cheek comments like “Billie???” and “Walmart version of Billie Eilish” appearing in the chat, though a fairer critique reads, “If this is the Billie Eilish and Finneas O’ Connell legacy, I’m absolutely living for it.” There’s also the fact that Rob Kinelski, who handled the mixing on Eilish’s debut album, also worked on this project, lending it a similar edge.

But as a whole, TWST0001 allows the artist’s unique approach to songwriting to shine through, thus carving out her own space in the alternative pop landscape. It’s an incredibly immersive listen from start to finish, one that draws you into rather than merely describing its hyperdigital world. By bookending the EP with ‘Are You Listening?’ and ‘Are You Filming Me?’, twst not only addresses the listener directly, but also traces a compelling narrative that begins with the singer craving to be heard and ends with feeling suffocated by all the attention that has come her way. “If flowers need remotes to grow/ Then is that you with the button?” she sings on the ominous closer, which is also the only previously unreleased track here.

While the EP’s overarching themes of isolation and anxiety are more pertinent than ever, opener ‘Are You Listening?’, which just happens to be the record’s most hard-hitting banger, has taken on a new resonance. With lines like “end of the world on my playlist”, the track seems to be a biting indictment of a society more comfortable with performative allyship than actually paying attention. She even responded to the state of things in an alternative video for the song, which sees her playing a live session with footage relating to COVID-19, fake news, climate change, and more appearing in the background. “All these things have been prevalent for longer than I’ve been alive but the access to technology that we have has brought it all so much closer to our immediate experience,” she explained. Twst doesn’t just reflect on the participatory culture of the internet – she very much engages with it through her online presence. We may not know exactly what the next few months are going to look like, but rest assured: twst? She’ll be there (always).

EP Review: twst, 'TWST0001'In the months before the pandemic hit, Welsh singer-songwriter Chloé Davis aka twst promoted her new songs in a series of intimate but dynamic live shows, with a small but passionate crowd of fans screaming her lyrics back at her. Of course, she couldn’t...