Sad13, aka Speedy Ortiz’s Sadie Dupuis, has announced a new album called Haunted Painting. It’s set for release on September 25th via her own label Wax Nine, a Carpark Records imprint. Following early single ‘WTD’, the songwriter also shared a new track from the album titled ‘Ghost (of a Good Time)’, alongside an Elle Schneider-directed visual. Check it out below, along with the album’s tracklist and artwork, designed by Sadie’s mother Diane Dupuis.

“I worked on Haunted Painting throughout 2019, writing, arranging and recording from home, then finishing the songs in studios around the country in between Speedy’s fly-in dates,” Dupuis wrote in a statement. “It’s maximalist, and more true to me and my tastes than any record I’ve done.

Inspired by a recent basement show in Brooklyn that began after midnight, Dupuis described the upbeat new single as a “party song about not going out.” 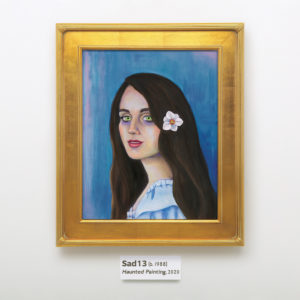