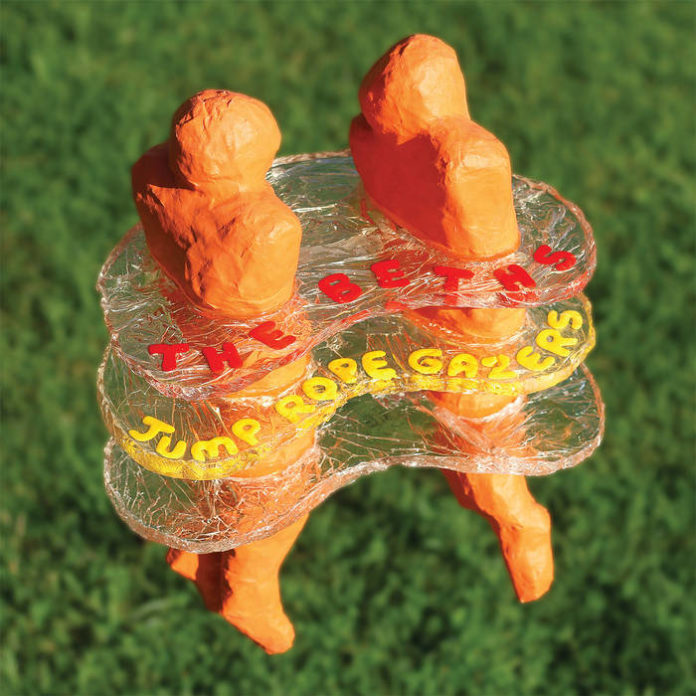 With their breakout 2018 debut LP, Future Me Hates Me, The Beths – aka singer/guitarist Elizabeth Stokes, guitarist Jonathan Pearce, bassist Benjamin Sinclair, and drummer Tristan Deck – showcased their knack for stringing together tight hooks, sharp lyrics, and driving melodies, resulting in one of the most invigorating indie albums of that year. So despite Stokes’ cautious attitude on the opening track of their sophomore album, ‘I’m Not Getting Excited’, it’s hard not to get excited when those riveting guitars kick in, bolstered by rapid-fire drumming and a ferocious guitar solo around the midpoint that seems to exist for the sole purpose of assuring the listener that none of the band’s fervour has been lost in the two years since their debut.

But the rest of the album, titled Jump Rope Gazers, hints at a new direction for the band, one that rests on a more mature and refined sound that’s accompanied by earnest, vulnerable songwriting. It may not exhibit the same kind of fiery energy that powered their previous effort – at least, not all the way through – but this affords the band a lot more space to explore the tension introduced by the opening track; that insecure state of not knowing whether you should give yourself fully or try not to get your hopes up too high when things seem to be going well (“Being patient’s never been my forté,” Stokes admits on ‘Do You Want Me Now’, while elsewhere she sings, “Stay, my hopes are prone to elevate”). Though a cleaner approach is often a common signifier for the much-dreaded sophomore slump, that emotional restraint doesn’t hold back the band’s sound – instead, it allows for a more dynamic, rich palette that opens it up to new possibilities.

Stokes might be wary of coming off too sincere, but some of the album’s most memorable moments are also its most unabashedly sentimental. The title track marks the most radical departure from Future Hates Me, a nostalgic, 2000s inspired ballad that earns most of its potency from that one line: “We were jump rope gazers in the middle of the night,” Stokes reminisces. In an interview, the singer explained she imagines this jump rope as a connection between two people, and those observations about distance and relationships add another layer of tension to the album’s content. “Long distance is the wrong distance/ And there has never been a gulf that’s quite as great,” she sings on the tender ‘Don’t You Want Me Now’. If the sentiment of the track reminds you of Death Cab for Cutie, that’s not entirely a coincidence – The Beths recently went on tour with the band, whose influence seeps through most obviously on the moving, acoustic-driven ‘You Are a Beam of Light’, an unexpected but nevertheless gorgeous highlight.

Part of what makes Jump Rope Gazers so delightful is that Stokes’ witty, self-deprecating lyrics are often contrasted with the pure, unadulterated joy of tracks like ‘Acrid’. Despite lines like “Tragic, the messages I send, my mind post-midnight/ Are showing seen but no reply” during the verses, the band breaks into a soaring, blissful sing-along chorus that feels like a ray of sunshine. The buoyant ‘Mars, the God of War’ contains some of Stokes’ most playfully inventive lyrics that once again return to the subject of texting, this time imagining the computer as a “war machine” used to fire reactive messages. The track boasts another one of the album’s catchiest hooks: “I wish that I could wish you well,” she repeatedly laments, “Instead I’m hitting my head and hitting backspace on ‘Can’t you just go to hell?’”.

Moments like these serve as reminders that there’s still a lot of bite and personality to the band’s songwriting, even if overall it anchors in a sweeter, more conventional sound. The albums is full of self-aware reflections that make it feel both relatable and all the more personal: “I’m sorry for the way that I can’t hold conversations/ They’re such a fragile thing to try support the weight of,” she sings on ‘Dying to Believe’. Self-doubt keeps creeping back in throughout the album’s 10 tracks, but it’s heartening to see it end on a relatively hopeful note with the aptly titled, beautifully melodic ‘Just Shy of Sure’. “Hey, you can’t win without entering,” Stokes ultimately reasons. When it comes to Jump Roze Gazers, though, there’s no doubt about it: the Beths have once again served up one of the most captivating pop-rock albums of the year.