Tomberlin, the project of Sarah Beth Tomberlin, has announced a new EP titled Projections. The follow-up to her 2018 debut LP At Weddings was co-produced by Alex G and Sam Acchione and comes out October 16 via Saddle Creek. Accompanying the announcement, the artist has also shared the single ‘Wasted’ alongside a music video directed by Busy Philipps. Check it out below, and scroll for the EP’s cover artwork and tracklist.

“Wasted’ was the most fun song to record,” Tomberlin said in a statement. “I brought the song with the guitar part and knew I wanted drums, but wasn’t sure what kind of beat I wanted. Alex played this drum beat for me and was all ‘kinda left field but maybe this would be cool.’ It took the song to a whole new level. Sad song or summer banger? You tell me.”

She added: “The video was made with the help of Busy Philipps (who directed) and Marc Silverstein (who shot it), who are more like family then friends at this point. I was quarantined with them and their girls in South Carolina and we came up with the idea and shot it in about 4 days on an iPhone.”

Speaking about the process of shooting the video, Phillips said: “It was such a collaborative and intimate experience – we’d been listening a lot to the EP in the house. The concept evolved from how striking SB looked in that dress, combined with the lushness of the greenery and watching our pre-teen daughter and her friend having this kind of magical few weeks of freedom and childhood in the middle of what has been such a heavy time, obviously.”

“Being able to just shoot it on our phones meant we could do it whenever the girls were up for it, or when the light was perfect or even right after the hurricane cleared,” she continued. “We would just run out and do it. I would hold up my little beats pill and play the music on repeat and we would just get stuff. Honestly, it was magic. I feel like it comes through when you watch the video.”

You can pre-order Projections here. 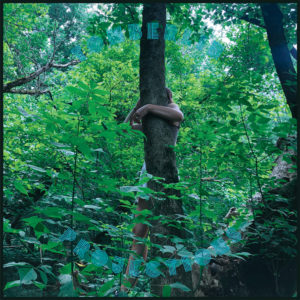