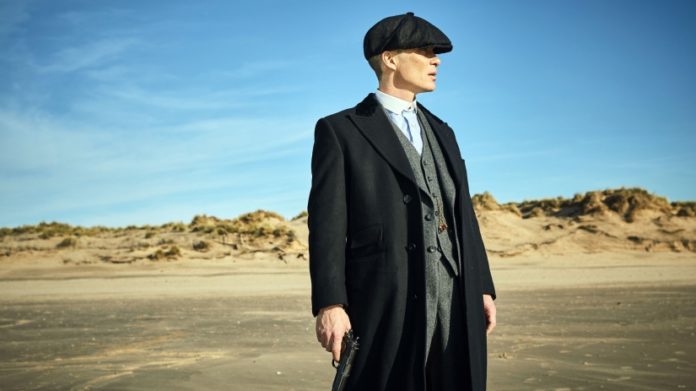 One of the main television hits of 2019, of course, was the fifth season of Peaky Blinders. And it ended with a shameless cliffhanger – with a bunch of questions and possible answers, indicated only by a couple of vague hints. Managed to shock – including someone absolutely illogical (and indeed pleasant) return. And most importantly – even more clearly than the previous, fourth, season – outlined the development path of the cult series.

True, at first glance, everything is pretty standard. The same Nick Cave sings an amazing Red Right Hand in credits. The same color scheme: a hazy gray industrial background – plus red bloodstains, yellow headlights, juicy brown mud, and orange cigar light, blue cocaine ampules, black pistols, piercing blue eyes of Cillian Murphy. In the end, the same plot twists and turns – which allows you to combine the real historical context with the fictional – even “based on real events” – dramatic story of a single criminal clan.

And here, perhaps, it’s finally worth noting that the mentioned “separate taking” – both in terms of form and in terms of content – finally finished off the permanent showrunner Stephen Knight with tightness. Moreover, this can be seen from the very first shots: the start of the first episode – and to a large extent the plot of all six – determines Black Tuesday of 1929. A grand American stock market crash, on the one hand, is forcing the Shelby clan to abandon plans to legalize the business and return to the old paths. On the other hand, it intensifies the struggle for power, fuels ambition, splashes gasoline into the already decently so bonfire of family discord.

The latter is indicated by especially thick, broad strokes – first, in the context of the confrontation between the young “progressive” guys and the carriers of “traditional values”. The ranks of the former are replenished with the archetypal thin-boned American blonde (the usual wonderful Anya Taylor-Joy) staring at old people in caps with poorly concealed contempt. The second – in fact, old men in caps – fiercely dismiss changes, not having the slightest opportunity to ignore them. In general, again – the theme of “fathers and children.” Eternal, not to say – hackneyed.

When talking about Peaky Blinders and the atmosphere in the movie, we cannot skip mentioning that “casino-environment” haunting and existing in the bleak streets of Great Britain. While the series is not centered around gambling, we can immediately feel the nature of it throughout the whole series. Even if it is not shown we are sure that people indeed are engaged in this activity. What’s more the main thing in the series is the fact that the group owns a horse racing system, which in fact was the first thing people placed their bets on. Because of that and due to the high popularity of the TV show, Peaky Blinders has become a basis for online casino slots for real money where Tom Shelby and other characters, with their feature caps, could be seen as playable characters.

However, you don’t have to yawn and get bored, because the semitones and dull reflection here – even more actively than before – prefer noise, din, and extreme passions, and even loud music – of course, matched with manic thoroughness exactly to a particular scene. Accordingly, Peaky Blinders’ signature clip style is nowadays screwed up to deliberately straightforward associativity: the one who is overcast and ill paces along the pavement under Joy Division; another incendiary conflict announced by Black Sabbath; Anna Calvi sings about the “last dying wish” – and so on.

And even further – down to the mass of colorful explosions, indiscriminate firing from a machine gun in the spirit of Predator, an unfolded duel of UFC looks, a high concentration of cruel reprisals…The toolkit beats in the forehead, promptly leading away from the “Peaks” from their original, purely Birmingham locality in the direction of the Hollywood sweeping movie comic strip. Here, by the way, is the appearance of Oswald Mosley, the founder of the British Union of Fascists: he zealously rants, intrigues, destroys everyone and everything – and, in general, is indicated by a sort of caricatured black and red vicious blot. Or – entering the stage of the equally lurid Scottish Billy Boys, which, in fact, is needed mainly so that we can admire the play of Brian Gleeson – and we saw several more spectacular scenes.

The season itself is also aimed at spectacular scenes. A minimum of chewing motivation – with a maximum of short, stylish pieces, shot, probably, specifically to applause. Here, for example, Aidan Gillen’s Aberama Gold recklessly, with the help of a red-hot tar, takes revenge for the crucifixion of his son – and charmingly glances at the camera. And here you have Arthur – old Arthur, whose bloody tantrums are now redundant beyond any measure imaginable – and beyond measure are delightful. Well, even there – even the performer of the title role does not shy from a frantic replay, so Tommy Shelby heart-rending yells and pounds the walls: they say that no one ever listens.

Moreover – in some places, Knight and his comrades are no longer embarrassed by outright theatricality. They are mixing a dynamic ballet number with the frantic escalation of suspense as if they had seen enough of the third John Wick. They set on the protagonist the ghosts of the past in the person of Annabelle Wallis, literally pacing out of the fog – in the manner of American psychological thrillers. Here and there, ringing pauses are inserted into the story – forcing the audience to squeeze into chairs. After a minute, on the contrary, the pace up the tempo with a ragged installation. They easily justify dashing scenario twists with unimaginable coincidences.

In short, they are approaching a dangerous border with dramatic vulgarity. But still, they don’t cross the line, masterfully balancing between a noticeable simplification of ideas and the highest mastery of implementation. Yes, Peaky Blinders have become more frivolous and lightweight. However, this was more than compensated for by increased dynamism, an increase in the entertainment component and blockbuster entertainment – to the displeasure of perhaps the primmest conservatives.