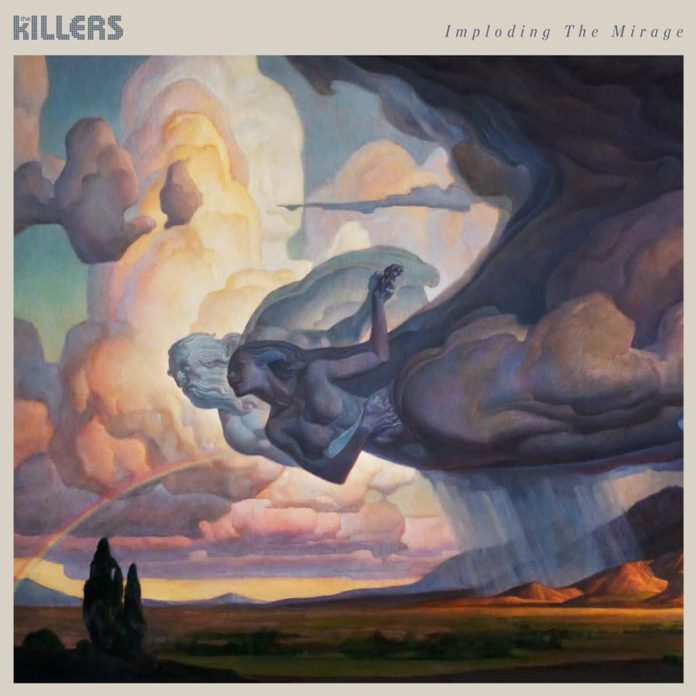 “We’re all gonna die!” Brandon Flowers proclaims on ‘When the Dreams Run Dry’, the penultimate track on The Killers’ new album, Imploding the Mirage. Though, like many artists, the LA band were forced to postpone the release of their sixth LP in light of the COVID-19 pandemic, it still feels like a ridiculously unsubtle reminder, one that almost completely undercuts the earnestness with which Flowers wrestles with the idea of mortality throughout the rest of the song. And yet it’s a liberating a moment, a playful release of tension that ultimately opens the door for a full-hearted embrace of the kind of wide-eyed optimism the group are known for: “We’ll just follow the moon, to the stars/ To the sun, to the ground/ And around, and around,” he sings, dancing around the words. And on Imploding the Mirage, their best and most triumphant album in more than a decade, that’s exactly what they reach for.

Following 2017’s uneven but occasionally revelatory Wonderful, Wonderful, The Killers had two options: either delve deeper into the experimental tendencies and introspective lyricism they explored on that album or pivot back to their signature brand of escapist heartland rock. While there are still heartfelt, personal moments on Imploding the Mirage, Flowers and company choose the latter path and go all in on the kind of heaven-reaching grandiosity that’s made them so successful. It could have easily come off as painfully overblown and self-indulgent, as The Killers’ albums often do, but instead their vision feels both gigantic and razor-focused – the record is filled with one absurdly catchy chorus after another, bolstered by punchy, 80s-inspired production and a host of guest appearances that consistently elevate the material, from Lindsey Buckingham’s killer solo on ‘Caution’ to Weyes Blood’s ethereal vocals floating atop ‘My God’.

It all kicks off with what might be the strongest track on the album, ‘My Own’s Soul’s Warning’, which catapults its way into the sky with a soaring synth line and driving rhythm section – from that point on, everything on Imploding the Mirage takes place at least 10,000 feet above the ground. “I tried going against my own soul’s warning,” Flowers sings in his impassioned delivery, “But in the end, something just didn’t feel right.” You can never really tell what he’s singing about, but you could easily apply that line to the approach The Killers have taken on this album: they could have settled for a more ‘mature’, thoughtful sound, but in the end they decided to throw caution to the wind and the result is gloriously reinvigorating: aided by Flood’s dynamic production, ‘Dying Breed’ reaches for the epic ambition of the band’s Sam’s Town era, while the sped-up ‘Caution’ bursts with infectiously reckless energy.

The album is not without its flaws – it falters slightly towards the back end, mostly due to the fact that the first half hosts some of its best tracks all stacked one after the other. But it allows the band to venture into some slightly unexpected territory as the album progresses, like the sweeping, disco-inflected ‘My God’, a track that captures a sense of dramatic momentum that’s otherwise lacking throughout the album’s boilerplate, stuck-in-time storytelling. Still, for all the delightful swagger of ‘Fire in Bone’, the song suffers from a weak chorus and a surprisingly muddled sound that’s far too indebted to that of the Talking Heads, while ‘Lightning Places’ feels inconsequential following the titanic ‘Caution’. What’s more, while the sense of idealism that overflows throughout Imploding the Mirage generally feels appropriate for the album’s tone, after Flowers wrings out multiple versions of the same story, some lines just feel a little too silly. “While you were out there looking like that/ I struck my name from the camouflage/ I wasn’t lost in the collage/ I was imploding the mirage,” he pompously sings on the closing title track.

Naming your album after one of its most nonsensical lines might be an ironic move for a band often accused of lacking a sense of identity, but there’s no denying that Imploding the Mirage radiates with the kind of confidence that hits differently right now, especially when the execution is so on point. They don’t quite implode the mirage here, whatever that means, but that romanticism is aspirational rather than purely flashy, a bolt of hope that the band never fully lets go of. It might not always be accompanied by the nuanced songwriting one might expect from an act at this point in their career, but there are hints of growth, too, on tracks like the evocative, The War on Drugs-esque ‘Running Towards a Place’. It might have been nice to see the band try some new ideas and expand their palette, but the maximalism on display here is more satisfying than most things The Killers have done over the past dozen years or so.

Album Review: The Killers, 'Imploding the Mirage'“We’re all gonna die!” Brandon Flowers proclaims on ‘When the Dreams Run Dry’, the penultimate track on The Killers’ new album, Imploding the Mirage. Though, like many artists, the LA band were forced to postpone the release of their sixth LP in light of...