John Frusciante has announced a new solo album called Maya. Marking his first solo release in six years and the first-ever instrumental electronic full-length under his own name, it comes out October 23 via Venetian Snares’ Timesig label. The Red Hot Chili Peppers guitarist has also released a new song from the album, ‘Amethblowl’. Check it out below, and scroll down for the album’s cover artwork and tracklist.

Spanning 9 tracks, the album is influenced by ’91 to ’96 breakbeat hardcore and jungle music in the UK, according to a press release. Its title is a tribute to Frusciante’s cat, who was his pet for 15 years before recently passing away.

“For a full year before I started this record, I worked within self-imposed limitations and rules that made the music-making process as difficult as possible, programming for programming’s sake,” Frusciante explained in a statement. “After a full year of that, I decided to make things easier, to the degree that I could regularly finish tracks I enjoyed listening to, while continuing many of the practices I‘d developed. Throughout the recording of Maya, I would prepare to make each track very slowly, but would finish tracks very quickly. I’d spend weeks making breakbeats, souping up a drum machine, making DX7 patches, and so on. By the time an idea came up that seemed like the beginning of a tune, I had a lot of fresh elements ready to go.”

Normally, Frusciante makes electronic music under the moniker Trickfinger, whose latest release arrived this past June. But as Frusciante explained, “Maya loved music, and with such a personal title, it didn’t seem right to call myself Trickfinger, somehow, so it’s by John Frusciante.” 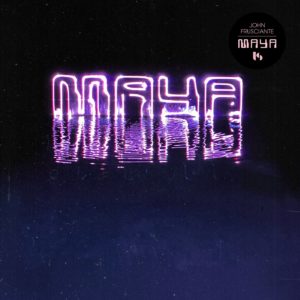