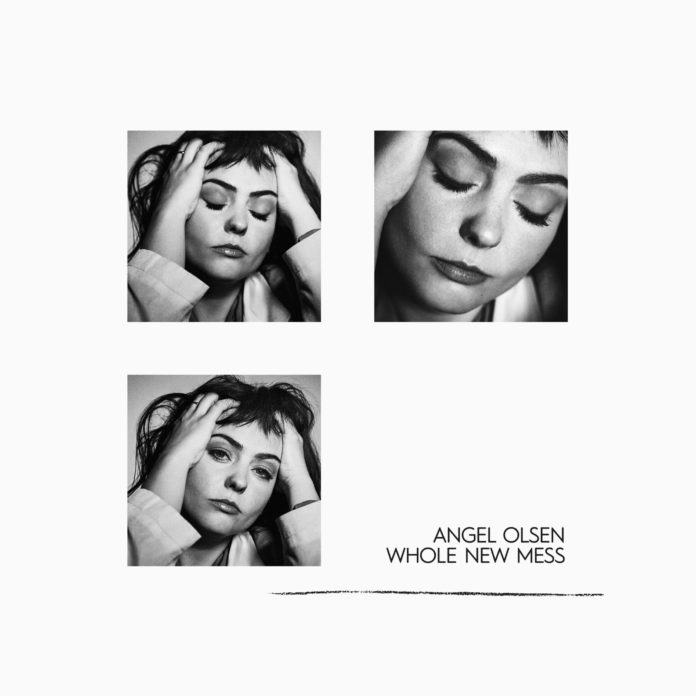 Even when adorned with lavish, grand instrumentation, the raw intensity of Angel Olsen’s voice always remains at the center of her music. She proved as much with last year’s All Mirrors, perhaps her most sonically ambitious effort yet, in which she was accompanied by a 12-piece string section while sticking to her deeply introspective songwriting approach. But Olsen actually started working on the album entirely on her own, recording at Phil Elverum’s Catholic-church-turned-studio in Anacortes, Washington – it was only months later that the idea for an expansive version came about. The singer-songwriter originally considered putting out both versions at the same time, but thought it “more interesting when people can listen back to stuff later that’s the original version, versus it all being compared at once,” as she told Rolling Stone last year.

It turned out to be a pertinent statement – one of the most interesting aspects of Whole New Mess is not so much the nakedness of the instrumentals but the way the passage of time seems to have distorted the meaning of the songs themselves. Dealing with the dissolution of a romantic relationship as well as her own struggles with addiction, Olsen’s lyrics often directly engage with the notion of time and how it inevitably causes a shift in perspective. On the opening track of the record, one of two previously unheard compositions that also serves as the title track, she makes a note to herself: “When it all fades to black, I’ll be gettin’ back on track/ Back to my own head, cleared out, ’til the time comes.” There’s a stark vulnerability in her delivery as that promise transforms into an expression of self-confidence: “I think I’ll really do the change,” she repeats as the song draws to a close.

Stripped-back recordings – including Olsen’s own early work, from 2010’s Strange Cacti EP to 2012’s Half Way Home – are often described as having diaristic qualities, but Whole New Mess feels more like taking a peek at an old diary and seeing how those confessions have taken on a new resonance. “Took a while, but I made it through/ If I could show you the hell I’d been to,” she sings on ‘(Summer Song)’. ‘What It Is’, a propulsive cut that was previously sequenced right in the middle of the record, now acts as the closer, which may or may not be a conscious decision: “Knowing that you love someone/ Doesn’t mean you ever were in love,” she sings, as if that observation has only gained more legitimacy over time.

If Olsen’s voice sounded breathtaking on All Mirrors, here each minute detail is amplified to make it feel like every word is as intimate in its physicality as a breath, one that rises and falls as it reacts to feeling. On Whole New Mess, the extent to which these songs are really about grappling with loneliness becomes all the more palpable. You can hear it in the way she sings that she’s “hiding out inside my head” on ‘Lark Song’, a dramatic highlight on All Mirrors that still remains a stand-out here; she returns to the same idea on the visceral ‘Impasse (Working for the Name)’ (“I’m just livin’ in my head”). One might have expected these songs in particular to not work in a quieter context, simply because of how much heft they carried on All Mirrors – but the alternate framing enhances those elements that might have otherwise been lost. In fact, on a purely emotional level, this version may even outshine its predecessor. What’s certain is that Whole New Mess is much more than just a collection of demos – it stands as a testament to the way our perspective on art, just like life, is constantly shifting.