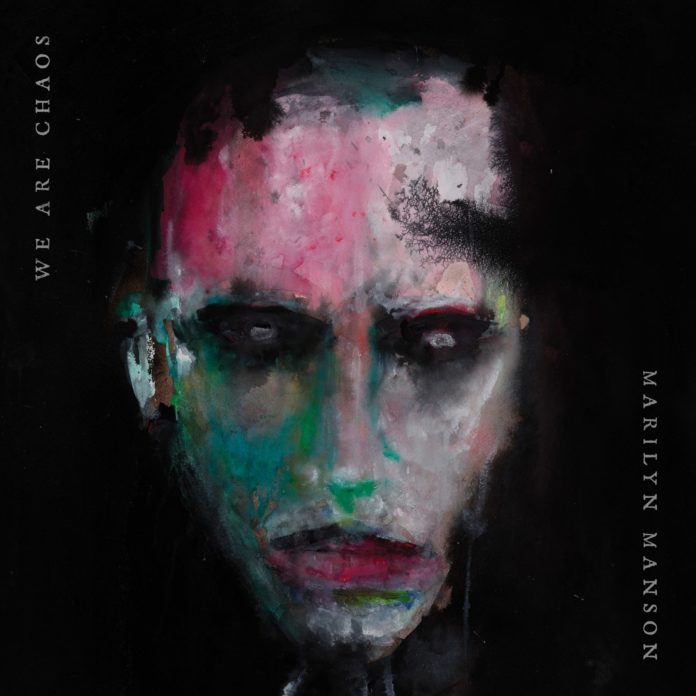 What happens when rock’s reigning provocateur runs out of tricks? When, almost three decades into his career, his once-scandalous image has lost any if not all of its shock value? Does he lift off the veil and make a grand return with his most personal album to date, or does he simply try to change his persona? What could possibly be next for the self-proclaimed Antichrist Superstar, the God of Fuck, the… wait, what’s that he’s singing? “I’m a bee, I’m the king bee”?

Those might be actual lyrics from the opening track of Marilyn Manson’s new album, but believe me when I say they’re more menacing than some of the rhetorical questions that come later (“Am I Superman?/ Am I superstitious?” he ponders on ‘PERFUME’). And they at least make sense. Because, you see, he used to be a snake, with all of the obvious symbolism that entails, but now he is a bee, though not a harmless one, because he vows to “destroy every flower” and “cover the earth in honey”, whatever that means. It might all be a well-orchestrated joke, but the fact remains: while we certainly can’t do away with the entire bee population, that’s not something you can say about Manson’s less-than-chaotic eleventh studio album.

In all seriousness, though, there is a considerable amount of self-reflection on WE ARE CHAOS, enough for some to inevitably helm it as the most personal album he’s ever made, which is neither a false statement nor a particularly meaningful one. Because while he does ask questions like “Am I a man or a show?” in addition to the more expected “Am I garbage or God?”, Manson never really digs much deeper than that – after all, his goal is not so much to show he’s capable of introspection than merely self-control: “Making this record, I had to think to myself: ‘Tame your crazy, stitch your suit. And try to pretend that you are not an animal’,” he said in a statement accompanying the album’s announcement.

Besides the fact that bees are obviously also animals, this approach leads to one of the most vacuous, nondescript, and derivative albums of Manson’s career. But it’s probably a good thing that the record isn’t trying to be an earnest examination of the person behind the façade, as the shock-rocker’s most entertaining albums are those that acknowledge the misanthropy and nihilism that permeate his discography as exactly that: a guise played up for dramatic effect. “Don’t worry/ It’s all just tongue cheek,” he assures us on ‘PERFUME’, a song that’s among the album’s best simply for how fun and slyly subversive it is.

Granted, Manson is taming his crazy only by a fraction here, and the album still revolves around familiar tropes: obsession with death, societal disenfranchisement, self-hate. In fact, WE ARE CHAOS works best when it acts as a dark mirror to society, even if only in the vaguest sense: on the anthemic title track, the reminder that “We are sick, fucked up and complicated” hits differently when every new song right now seems intent on convincing us that everything’s going to be okay; not to mention the irony of a line like “This arrangement is deranged/ Imagine us engaged in flames”. When he proclaims, “I’m not special, I’m just broken/ And I don’t wanna be fixed,” on the melodic ‘SOLVE COAGULA’, he seems to be speaking for the entire human race.

But these are only exceptions in an album filled with tired clichés. Perhaps not too many people go to a Marilyn Manson record expecting the most thought-provoking lyrics, but sonically, too, WE ARE CHAOS is practically devoid of any distinctive features. Produced by Shooter Jennings, son of legendary country musicians Waylon Jennings and Jessi Colter, the album is not so much a stylistic shift as it is an invocation of glam rock artists who were previously more of an influence on Manson’s image than his sound. Despite some pleasant instrumental flourishes, though, the album still comes off as painfully generic and stale, lacking the abrasiveness that even Manson’s previous LP, 2017’s Heaven Upside Down, displayed.

Heavier tracks like ‘RED BLACK AND BLUE’ and ‘INFINITE DARKNESS’ will certainly scratch an itch for fans of Manson’s trademark industrial sound, but on the whole, sticking to the same formula has less of an impact when the theatrics are this toned down. And though it might be easy to chuckle at some of the album’s sillier lines and sing along to the more pertinent ones, it’s hard to ignore some of the rampant misogyny that pervades a handful of tracks (“All the blondes drop their panties and cry/ To the father’s first lullaby,” he sneers on ‘PAINT YOU WITH MY LOVE’). For all the buzz surrounding WE ARE CHAOS, the line that rings the most true doesn’t arrive until the very end: “I’ll never play you again/ Then I’ll put you away.”

Album Review: Marilyn Manson, 'WE ARE CHAOS'What happens when rock’s reigning provocateur runs out of tricks? When, almost three decades into his career, his once-scandalous image has lost any if not all of its shock value? Does he lift off the veil and make a grand return with his most...