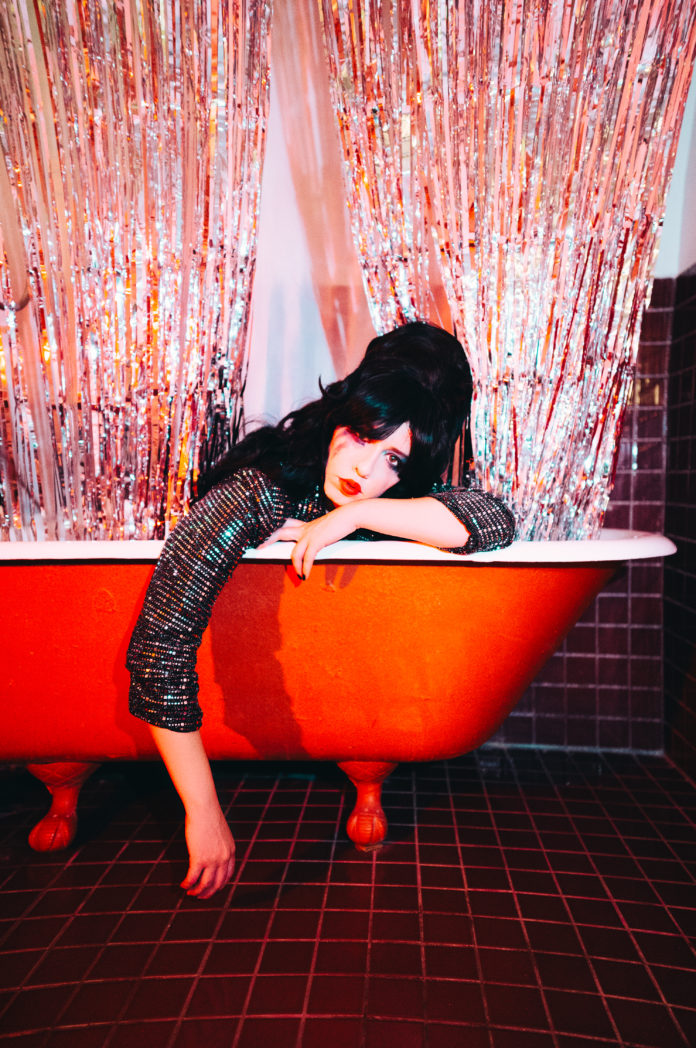 There’s a cathartic moment on LUNA AURA’s new EP, THREE CHEERS FOR THE AMERICAN BEAUTY: about halfway into the project’s riotously fun array of campy, guitar-fuelled rock songs, the singer-songwriter pauses for a split second on ‘TALKING TO ME’, then lets out a piercing scream. It’s a very familiar type of scream, one that AURA seems to have summoned directly from the 90s alternative scene that her recently-revamped sound and aesthetic pull from. Unsurprisingly, the LA-via-Phoenix native, born Angela Flores, cites acts like Hole and Garbage as some of the main influences for her new persona, and though she says her days as a self-proclaimed “alien pop star” are behind her (you won’t find any of her old music on streaming services), a lot of the infectious qualities of great pop music are still there. From the propulsive ‘CRASH DRIVE’ to the subversive ‘ENGLISH BOYS’ and the explosive closer ‘BABYDOLL’, THREE CHEERS is chock full of catchy riffs and empowering lyrics, each song introducing us to a different rebellious female character while exploring the societal pressures faced by young women in America today. LUNA AURA’s style may be deliberately nostalgic, but there’s an electrifying energy running through her music that makes it feel all the more urgent.

We caught up with LUNA AURA for this edition of our Artist Spotlight series, where we showcase up-and-coming artists and give them a chance to talk about their music.

I felt very emotionally connected to music from an early age. I loved how it could make you cry, that it could make you feel lonely, loved, empowered. I had been singing most of my life and I started writing songs when I was about 10 years old. I’ve always had a passion for it, and it became very much a part of my identity early on in my life. I remember one of my first concerts I ever saw was Paramore on The Final Riot! Tour back when I was about 15. I just remember how electrifying it was to see Hayley Williams on stage absolutely murdering it. It was like fire rumbling in my chest, it made me want to cry. I had never felt that way about anything in my life, and that was when I knew this was something I wanted to chase.

Your songs draw a lot from the 90s alternative scene – what are some influences one might not expect while hearing your music?

I pulled a lot of inspiration for this EP from bands like Garbage, Hole, NIN, but I was exposed to a lot of different types of music growing up. I always felt drawn to the things that either told a really good story or did a great job of making me feel something deeply. I’m drawn to things like Rage Against the Machine for the emotional intensity and charged message but, in the same breath, I’m drawn to people like Lauryn Hill for her unique female perspective on life and her ability to tell a story. I wrote this EP in a time that I was finally starting to trust myself, lean into my confidence, and stop letting other people/things control me. I felt empowered, and I pulled a lot from the people who made me feel that way when I was young. I wanted to take what I had learned from them and weave in my own story.

Do you follow any specific process when it comes to writing songs?

I don’t have a specific working process that I go by every time I sit down to write. I really enjoy the spontaneity of not knowing where a song will start. Sometimes the music is already produced out and I just have to focus on lyrics and melody, and other times I’m starting with a bass and a click. I do love to start with the composition first if I’m starting a song from scratch because it’s easier to conceptualize a mood and melody when the music is there to set the tone. If we’re getting technical though, a little sparkling water and weed never hurts.

I’m curious about the meaning behind the title of your new EP.

I actually based the title of the EP off of the title of the film American Beauty. I love dark comedies, and I had been watching a lot more of them around the time I was writing this EP. Heathers, Jawbreaker, Sugar & Spice. I wanted to capture a campy aesthetic for this project, and that title just sounded so bitter and cheeky. It was a great base for the beauty pageant visuals as well. I was able to sort of create my own world that feels to me very much like the dark comedies I adore.

What were some of the ideas that went into the making of the EP?

I was writing from my own experience stepping into myself as both an artist and a woman. I was ridding myself of my conditioned self-image. I think culture and community are constantly interjecting into our lives to tell us what’s right and wrong, and what’s acceptable/not acceptable. Especially in the music industry. You have people telling you what to do and who to be on a daily basis. You end up shaping yourself to everyone else’s bullshit. Each song on this EP represents a different pressure that I’ve had to endure and how I was able to overcome it in my mind. I wanted the songs to feel intensely conversational and emotionally charged because that’s where my head was at that point in my life.

What’s the story behind that scream on ‘TALKING TO ME’?

That was my favorite part of making that song! To me ‘TALKING TO ME’ is the fight song of the EP. It’s the one I’m most proud of because that was really the moment that I realized what this project was. I had been tired of being mistreated and misunderstood in all aspects of my life. I was like half of a person, walking around letting other people decide what was best for me. It was unfulfilling and lonely. This song represents the moment I decided, no more. The scream was the release of tension that I had been holding onto up to that moment.

Is there anything you’re particularly looking forward to in the near future?

I’m looking forward to this release and continuing to release visuals that help bring this music to life. I’m also working on an interactive short story series that will work in tandem with the songs on the EP. Hoping to slowly but surely start releasing the stories next year, as well as more new music!

THREE CHEERS FOR THE AMERICAN BEAUTY is out October 2nd.