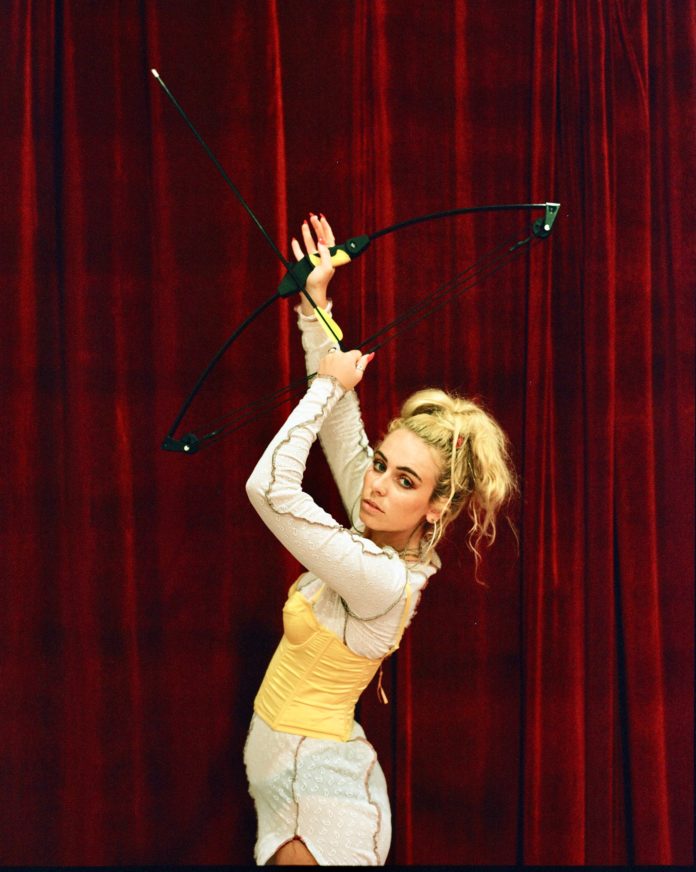 East London born and bred, Rose Gray emulates a gloriously colourful amalgamation of musical influences. From the obvious Primal Scream and Happy Mondays references to the more eclectic sounds of Nitin Sawhney, Rose Gray’s distinctive musical stylings speak to her equally animated surroundings. Having grown up on 90’s indie, dance and alternative classics, it’s no wonder that, despite her arrestingly soulful voice, Rose Gray has leaned more towards the cathartic and ecstatic feeling that comes from swelling choruses that are orchestrated to make you move. Since her first sombre, jazz-infused single ‘Good Life’, a lot has happened for Rose Gray in terms of her growth as an artist.  Her single ‘Same Cloud’, released last month, saw her reassessing her sound and marked the beginning of a new era. Showcasing a playful and jarringly sunny side to her music with a dash of an “I don’t care what you think of me” spirit, this change in direction is unsurprising when you consider that she was first compelled to make music whilst in the middle of a dance floor. Carefree and expansive, Rose Gray’s music recreates that liberating feeling that inflected the best part of music throughout the 90’s.

We caught up with Rose Gray for this edition of our Artist Spotlight series, where we showcase up-and-coming artists and give them a chance to talk about their music.

What’s been the most enlightening experience for you during lockdown, or the most positive thing you’ve taken from the very bizarre, collective experience of lockdown?

I learnt to produce and make little weird beats. I spent months just messing around on Logic.  Something I’m so surprised I hadn’t tried before. I’ve actually produced a track on my upcoming Mixtape, which I made in lockdown. I guess also just time to just exist and be at one- no rushing about just living- eating, making music, and sleeping. I enjoyed the simplicity, I’m taking that from this time.

Your music is undoubtedly influenced by your hometown London, is this something that’s done with intent or is it intrinsically mixed up in your art?

I guess my upbringing has direct coloration with my experiences and finds its way into my lyrics.  I grew up in a part of London that in my eyes is slightly confused, don’t get me wrong I love it. But it’s confusing, you have the traditional east Londoners and then you have people who live the more suburban lifestyle. Nearly everyone I grew up with stayed in their suburban bubble. I rebelled this, I always craved the energy of London. I started going out to parties and raves at 15/16. I would do anything to get on the Victoria line …. I formed an incredibly eccentric friendship group when I left for college in South London. I think this is where my true understanding of my hometown started. I feel like I’ve seen nearly every corner of London because of them and that has definitely shaped the music I make. I’ve had a lot of fun in my city.

What motivates you to create music and is it something that you’ve always been compelled to do?

I feel like I’ve always been very connected to my feelings and my surroundings. I was a very sensitive dramatic child. I loved telling stories, I loved performing and I loved music. So it kinda just happened. If I’m honest a few years back I felt like maybe doing music wasn’t for me, I’d made over 100 songs, nobody really cared, I was working loads of jobs and paying too much that I stopped seeing a future in music. But I think music calls you. The moment I stopped writing I felt so far away from myself. When I’m making music I feel like I’m doing what I’m meant to be doing- there’s no other way to describe it really.

Your single ‘Same Cloud’ charts the delightfully bittersweet feeling that comes post break up where you’re having an awful time but you take some solace in knowing – or at least hoping – the other person is too. The lyrics “And I never meant to cause any pain on you/But I guess I like the feeling that you’re feeling quite blue/And as I look out my window, and a rainbow falls through/Maybe it’s time/We got over us too” are just like a gut punch of accuracy. What inspired you to focus on this topic?

I was really missing someone. They were in California, thousands of miles away from me in rainy cold london. I feel bad saying this because I don’t think you should ever wish something shitty on someone, but I was hoping they were feeling like me. There is also a part of the song that is like, ‘ you know what maybe we need to get over this, what’s the point staying in this place..maybe it’s time for a new day..a rainbow even’. When a relationship breaks down it takes a bit of time but you get to this place where you’re like, ok I’m ready now to move on with my life. I hope we are both ok..”maybe it’s time.. we got over us too” I hope that comes through in the song, it’s not all gloom. Clear skies and rainbows are round the corner.

What was the inspiration for the ‘Same Cloud’ music video? How did the concept come about?

So I have quite an obsession, maybe I could call it a hobby. I love watching documentaries about the history of London. I found one about Shadwell basin in Wapping /East London. The next day I went to see it, it was on the hottest day in July – I think it was 36 degrees Celsius. I fell in love with it. Right there and then I decided I wanted to shoot something there, we waited for another sunny day, woke up at 3.30 am and filmed myself walking around it singing. I had this mad idea of getting into the basin and swimming into the middle, I changed my mind in the morning as I realised it was connected to the Thames.  I wanted to create a simple visual where you could see my getting over a relationship. Dancing and interacting with strangers at 6am. It’s kinda weird but is very much where I was at in my life.

How would you describe your music making style? Is it slow and methodical or more free and erratic?

I write lyrics on my phone usually on my way to the studio and if I’m at home I might just blurt them out or play something on guitar. In the studio for me it’s always a vibe, I’m very free in my writing style. Lyrics, a vibe then melody is how I usually do it. I don’t stick to one thing though.

What would you say is the biggest thing you’ve learnt about yourself through your process of making music? Has it highlighted anything unexpected or amplified things you already knew about yourself?

I’ve learnt that my sensitivity is my tool. I’ve also learnt/ still learning there are no rules, I was for too long trying to make songs that I thought the world would want to hear… but now I’m making music that I love, that I want to dance and cry too. I love what I do, I’m also not afraid of failing because I love the music I make. I’m proud of it.

What’s next for yourself, are you actively working towards an EP/LP or going with the flow in terms of musical output?

I have a finished mixtape set to release Jan 2021. I’m working on creating some visuals. My second single came out on October 9th (a cover of Saint Etienne’s ‘Nothing Can Stop Us’). I’m also writing a lot for the new year and beyond and just trying to stay sane through this bizarre time we’re all living through.