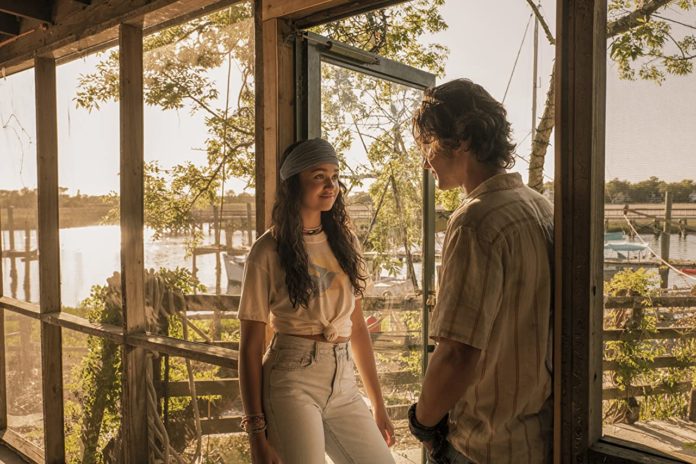 Outer Banks premiered on Netflix in April 2020, during one of the harshest periods of the COVID-19 pandemic. The world had just begun to settle into lockdown mode. For those of us lucky enough to be living in the safety of our homes, the true power of streaming services was revealed. While cinemas shut down and release schedules were pushed back, streaming platforms like Netflix continued uploading new content for their customers.

Outer Banks is the story of four lower-class friends living on an island owned by wealthy people. The main character is the tenacious John B, who has recently been orphaned. Child Services are onto him, but he’s too busy trying to get to the lost treasure his father was trying to find before he died. With the help of his three “Pogue” friends – JJ, Kiara, and Pope – they embark on a quest for their own wealth, following the clues Big John left for his son. But they’re not the only ones searching for the gold; John B’s former boss and new carer, Ward Cameron, has been after it for much longer than the Pogues have.

The show exploded into global popularity, claiming the number one spot on Netflix’s Top 10 streamed programs upon its release. A second season is already in production, which its large and dedicated fanbase is no doubt eagerly looking forward to. Here are five things you may not know about Outer Banks.

Josh and Jonas Pate are twin brothers who have previously collaborated on The Grave, Deceiver, Good vs Evil, Surface, and The Take, among other projects. Jonas Pate’s daughter, Lilah Pate, appears in a minor role throughout Outer Banks. In the first episode, she delivers the memorable line, “Dead body,” when she shows off a photo of Scooter’s corpse she took on her mobile phone.

Chase Stokes was the embodiment of a struggling Los Angeles actor before booking the leading role of John B in Outer Banks. In fact, he had to ask his mom for money so that he could travel to the audition. Initially, he decided not to audition because the concept sounded too similar to The Goonies, but later he changed his mind due to financial reasons.

His first audition was for the role of Topper, though he describes the audition as a bomb. At the last minute, he decided to audition for John B, which ended up being a lengthy process. In fact, Rudy Pankow was slated to play John B, but later elected to play JJ.

Upon Chase’s arrival to the production office, he asked someone he saw in the hallway to walk on his back after getting off a long flight. He didn’t know it then, but the person he met was Madelyn Cline, who had already booked the role of Sarah Cameron. Coincidentally, both Stokes and Cline (almost) crossed paths in Stranger Things, each appearing in minor roles (Stokes in season 1, and Cline in season 2).

The actors were given a considerable amount of free reign when it came to lines. This works in the story’s favor; as a result, the dialogue feels authentic and realistic for these sixteen-year-old characters. Many of the scenes don’t sound scripted, and it may be because of the amount of improvisation.

One notable instance of improv is the scene in which JJ shows off his hot tub. Instead of spending the money that he stole from drug dealer Barry on his restitution, he blows it on a hot tub. Kiara and Pope are understandably infuriated, but when JJ breaks down crying, they soften. He explains that he just wanted to get one nice thing for his friends, his “family”. The scene is without a doubt the most emotional moment of the entire first season.

John B and Sarah Cameron share obvious chemistry from the beginning of the series, even when they’re supposedly enemies. Between the long stares and flirtatious banter, it’s clear that they’re going to be an item before the end of the season.

In the fourth episode, the two end up going on a trip to learn more about the origin of the gold and where it may be hidden. John B hadn’t planned on Sarah’s presence, but the two bond quickly and find an easy rapport. At the end of the episode, they return to the island, wondering if they’ll still be friends, or go back to being a Pogue and a Kook. It starts to rain, and they kiss. The romantic movie moment was a total fluke; the rain wasn’t scripted or planned and happened naturally.

Early in the season, the Pogues find Scooter’s sunken boat, not knowing whose it is. They go out to the wreck hoping to find a clue to whose boat it is, and possibly something valuable that they can claim for themselves. John B goes down with no experience scuba diving, much to the concern of his friends. The underwater scenes were shot in a police training facility.

While in the marshes, the police arrive and warn Kiara, Pope, and JJ that they shouldn’t be out there during a police investigation. John B is supposedly underwater, waiting to pressurize, but time is running out. In fact, Chase Stokes is bobbing just below the surface of the water the entire time, hiding right under the boat in view of his castmates, who must pretend they don’t know where he is.