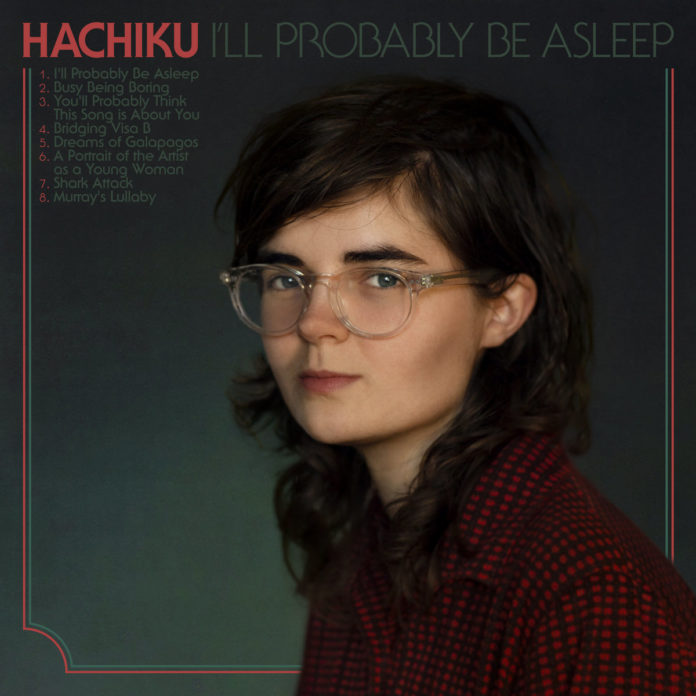 Coming from an artist whose music normally comes hand in hand with vague descriptors like “dream pop” and “bedroom pop”, the opening track to Hachiku’s debut studio album seems poised to break away from those associations by presenting something startlingly different: a big, roaring wave of guitar distortion cuts through the air, Hachiku’s dreamy vocals floating above: “Maybe I’ll be up for it/ But I’ll probably be asleep,” she intones, as if stuck in some sort of trance-like state, before blending into an expansive tapestry of instrumentation. There’s a unique sense of ambiguity to Hachiku’s songwriting, which is at once idiosyncratic and sincere; the psychedelic tones never feel perfunctory, instead serving as a gateway into a fractured psyche. “Leave your conscience behind and then cherish the beginning,” she sings, then raises her voice, “Of something that I don’t want to further unfold/ Let it go.”

It’s a mesmerizing introduction to an album that keeps finding new ways to enchant the listener. The project of Melbourne-based artist Anika Ostendorf, Hachiku’s eccentricities are what shine through on I’ll Probably Be Asleep, which remains captivating even when it slides back into textures that are less intricate and ambitious than the lead-off track – also the only song on the record that was made with the full Hachiku band, including guitarist Georgia Smith, bassist Jessie L. Warren, and drummer Simon Reynolds. An otherworldly charm runs through tracks like ‘You’ll Probably Think This Song is About You’ and ‘Dreams of Galapagos’, whose shimmery sonic backdrop brings a tropical vibe to the otherwise intimate arrangements: “In my mind I take you to all the places you want,” she sings on the former, underscoring the escapist fantasies that permeate the album. But there’s also a conversational – and often confrontational – aspect to Hachiku’s lyrics that grounds the project in reality, hinting at the inner conflict between wanting constant change and trying to find comfort in stillness.

It’s clear how Ostendorf’s personal experience has informed the ideas behind the album: she was born in Michigan, grew up in Germany, studied in London, then moved to Melbourne, Australia, where she signed to Courtney Barnett’s Milk! Records. The songs were written between places, and while their solid structure implies a sense of forward motion, I’ll Probably Be Asleep keeps oscillating between resoluteness and self-doubt. ‘Busy Being Boring’ dates back to 2018, when Ostendorf was applying for a partner visa to stay in Australia for two more years, and though the instrumental is dreamy and serene, it’s quickly undercut by Hachiku’s sobering performance. ‘Bridging Visa B’, whose lush sound showcases Hachiku’s artistic growth, is one of the record’s most propulsive cuts, but it also doubles as a commentary on the intrusiveness of the visa application process – and, by extension, the ways in which our freedom and ability to move forward is restricted by social structures beyond our control.

Even when Hachiku is tackling serious subjects, there’s a distinctive quirkiness to her approach, whether it comes through in some of the off-kilter production choices or her often equivocal lyrics. “If you’re like my friend Tushara you might think this song is about oral sex,” Ostendorf has said of ‘Shark Attack’, which is actually about her dog being diagnosed with throat cancer. But even with some of the track’s stranger lines (“You lick my fingers/ Saliva, does it last?”), her emotional devastation still rings through as her quivering voice calls out, “Please don’t leave me.” Closer ‘Murray’s Lullaby’ is marked by a similar kind of emotional honesty, with Hachiku striving to offer reassurance to a partner in a long-distance relationship. Elsewhere, she seeks to instil a more positive mindset on her own self: “Hold on to the truth that you know/ One day you’ll see you’ll have it figured out,” she sings on ‘A Portrait of the Artist as a Woman’. At 34 minutes, I’ll Probably Be Asleep is a bit too short to fully explore that personal journey, but it’s nevertheless an endearing and promising debut from an artist determined to stay true to herself in the midst of uncertainty.

Album Review: Hachiku, 'I'll Probably Be Asleep'Coming from an artist whose music normally comes hand in hand with vague descriptors like “dream pop” and “bedroom pop”, the opening track to Hachiku’s debut studio album seems poised to break away from those associations by presenting something startlingly different: a big, roaring...