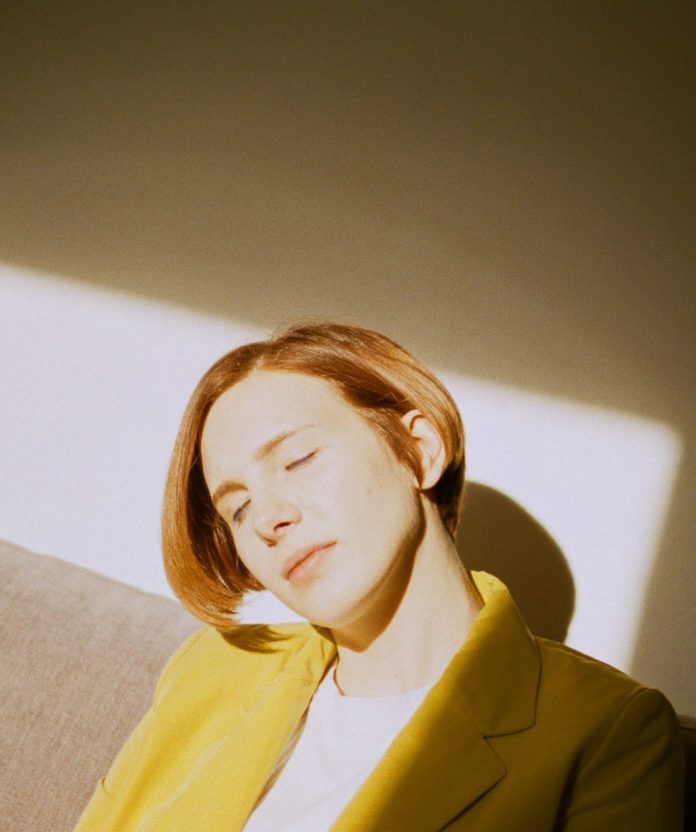 “I can’t find the answers for myself/ It’s easier to help somebody else,” Laura Fell laments on ‘Cold’, the second single from her upcoming debut album, Safe from Me. A psychotherapist by day, it’s perhaps no surprise that the London-based artist’s music is imbued with a sense of vulnerability and keen self-awareness, but it also serves as a subtle means by which to challenge some of those assumptions – the record is less about finding answers than the discoveries that arise simply from the process of introspection, and ‘Cold’ is a stunning embodiment of that. The song started as a spare arrangement before it took on a new shape in the studio, and the final result is lavish and engrossing as Fell’s quietly elegant vocals crawl around layers of ominous percussion; ‘Bone of Contention’ unravels with a similar kind of mystical beauty and poetic suggestion as Fell explores a love triangle gone wrong. The instrumentation throughout Safe from Me is wonderfully organic and refined, with Fell having recruited a group of classically trained musicians to help realize her artistic vision, but it’s the songwriter’s knack for penning empathetic, nuanced folk songs and wrapping them around her enchanting voice that renders it such a compelling listen.

We caught up with Laura Fell for this edition of our Artist Spotlight series, where we showcase up-and-coming artists and give them a chance to talk about their music.

What’s your earliest memory of feeling deeply connected to music?

Definitely the first band I felt really connected to was Bright Eyes – they were in many ways the band of my teenage years. Their songs suddenly put into words a lot of what I was feeling but wasn’t sure how to express, and that was the first time I think I had that really precious experience of feeling understood through music. I absolutely love the album they released this year, and really enjoyed going back down memory lane off the back of it, and revisiting their back catalogue.

Another memory that stands out is when my Mum gave me her copy of Blood on the Tracks by Dylan – I must have been maybe 16, or 17? I just remember sitting in my bedroom and listening to it from start to finish over and over again until I could recite all of the lyrics. I was so impressed by his ability to communicate these nuanced and complex emotions in a way that felt effortless, and avoided cliche. To this day some of my favourite lyrics are on that record.

What are some of your biggest influences, musical or not?

With music I’ve always been most drawn to the lyrics, and they are often what I tune into the most on a first listen. When it comes to lyrics, the artists that really blow me away are Adrienne Lenker – I love Big Thief, and heard them first, but then sought out her solo stuff and utterly fell in love with it – Conor Oberst (Bright Eyes), Blake Mills and Laura Marling. Then there are the classics – Paul Simon, Joni Mitchell, Leonard Cohen, Bob Dylan. I think what they all have is this carefully crafted balance in the language they use between the poetic and the everyday. Their lyrics are poignant and emotive but at the same time have this simplicity and directness to them as well, you know?

I read that you started playing music at 25, when the poetry you’d been writing started feeling more like songs. Could you talk more about that? What were your first attempts of setting those words to music like?

Yeah, so before I started to write and perform music when I moved to London, I’d studied Creative Writing as part of my Undergrad, so I was writing all of the time, really – poetry, mostly. But I guess alongside that I was also getting more and more into music, and listening to artists like Bright Eyes, Dylan, Cohen, where it often felt like a mix between music and spoken word, and almost like stories within the song. I remember thinking, oh maybe I could try that, too, and going through my notebooks and trying out melodies for lines I’d scribbled down. Then in my final year of Uni I did an open mic night where I sang two covers – Laura Marling’s ‘Blackberry Stone’ and Fleet Foxes ‘Someone You’d Admire’- with my friend Josh playing guitar for me. It was terrifying but also made me realise how much I enjoyed singing, and from then on I was quite keen to explore my voice more. So it sort of happened quite naturally over time. Then I bought a guitar and started teaching myself, fiddling around until something sounded nice, and playing it on loop until a melody came that fitted the words I’d written. Nowadays my writing process can differ more – sometimes the words come first, sometimes the melody, sometimes a guitar riff.

In what ways do you feel that being a psychotherapist informs your approach to songwriting?

I think that my training and work as a psychotherapist has really strengthened my ability to sit with vulnerability, and not need to avoid or run away from it, and I think that ability opens up that space in my songwriting for sure – I’m always wanting to drill down into the raw emotions of the experiences I’m writing about, to try to make sense of them and understand them on a deeper level. Also as a therapist I’m often looking for how it all connects, and I think that’s also present in my writing – this idea of looking for the thread that ties everything together. I often think that when you start therapy it’s a bit like getting the four corners of a jigsaw in place and then you work to slowly put the other pieces in to form a complete image. There’s this sense of never being quite sure where it’s going to take you, or what the image at the end is going to be, and I feel like that mirrors my experience with writing – a lot of the time I only really know what a song is about once it’s finished and I play it or hear it back.

‘Cold’ delves into the irony of making a living out of giving people advice, but not always being able to follow that advice yourself. Was pursuing music a different way for you to process those feelings?

Yeah, so with ‘Cold’ I guess I wanted to playfully explore and challenge a presumption I’ve encountered quite a lot that therapists are in some way these entirely self-actualised people that have it all together, and I guess also to acknowledge the frustrating way in which it is often so much harder for any of us to take our own advice than it is for us to give it out to other people. But I’d also say that the song sort of captures that self-doubt and self-frustration in the moment it’s experienced – it names it – so that it can then be let go. I feel like that’s actually a really important part of my relationship with music – writing is this process of noticing my experience, naming it, and by doing so being able to put it down, let it go, or move forward from it with a lesson learned. So yeah, for sure, writing is a really important vehicle for processing my feelings and experiences, and making sense of them for myself.

Could you give us some insight into the process of writing and recording your debut album?

In terms of writing the songs for the album, I’d say they came together over a period of 8 months or so and, when I had ten tunes written and finished I put the band together. We had several rehearsal sessions where we played the tunes through and my producer, Chris Hyson, put together the skeleton arrangements. We were quite conscious of the fact that we didn’t want to go into the studio with too defined an idea of where each song would go – we wanted to leave that open, and have the space to experiment and build each tune into its own little world. So I’d say we had three rehearsals before heading to Wales to record with the core band (Guitar, Bass, Drums), where we live-tracked each song and then recorded all the vocals separately. We had four amazing days there where we mostly focused on starting to shape the tunes, then back in London we added overdubs – a lot more electric guitar, the double bass, cello, horns, Rhodes – over the next year or so alongside the mixing.

It was a slow process but I’m so happy we did it that way, as each mix is so dense and needed time to get it just right. Killpartrick, who engineered, mixed & mastered the record has such an amazing ear for detail, and invested so much in making sure we ended up with the best possible result. I credit him for how polished and complete the final masters feel, but also still retain the vulnerability of the songs themselves.

What are some things you feel you took away from the experience as a whole?

Overall I learnt a real sense of confidence and conviction in my music from making the record, and from working with the incredible musicians involved. I think there was something about the concrete, tangible finished product of the album that also enabled me to sort of claim the titles of being a musician, being an artist, that before I think I’d struggled to own, in a way. Alex Killpatrick, who recorded, mixed and mastered the record, and Lloyd Haines (Drums) also taught me so much about sound and developing my ear in general. They and Chris (Hyson), who produced the record, have incredible ears for sound and arrangement. I feel very lucky to have been able to attend almost all of the mixing sessions with Alex, as I learnt so much being in the room for that process of bringing it all together.

What are your plans going into the future?

Obviously at the moment the landscape of live music is hugely uncertain, but I would love to do a tour of the record with the band once the album is released – it’s as lovely hearing the band bringing the songs to life on the stage behind me as it is to hear them doing exactly that on the record. Other than playing live again I’m also really itching to get back into the studio and record, and gradually work towards the next record. I’ve been writing a lot of new material over lockdown that I’m already starting to think about arrangements for. It would be amazing to have collaborations with other musicians be a big part of that again, like it was with recording Safe from Me – I learnt so much from the wonderfully talented musicians doing the record, and I personally find collaborating with others to be one of the most exciting and enriching parts of making music.

Safe from Me is out this Friday, November 20 via Balloon Machine Records.