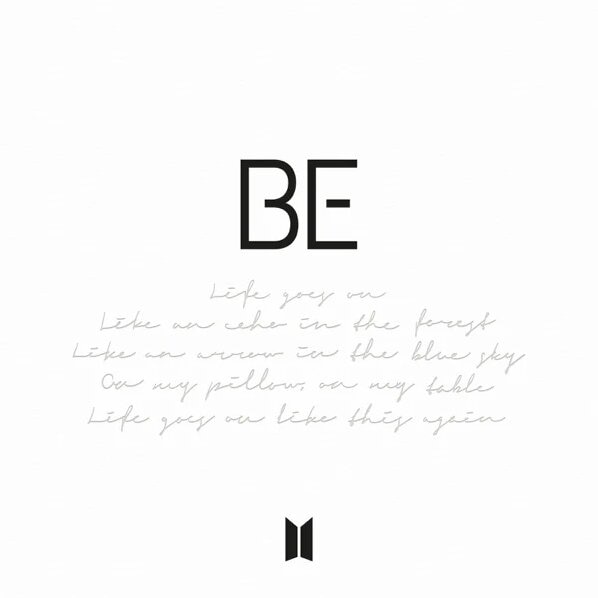 Their fifth and shortest full-length album, BE is somewhat of an oddity in BTS’ discography. Arriving just nine months after the K-pop group’s expansive, genre-hopping opus Map of the Soul: 7, it presents itself as almost the exact opposite product, yet also feels like a postscript to that project. Both efforts from the international superstars engage in a fair amount of fan service, but where the first over-indulged in Jungian philosophy and self-mythologizing, BE is more understated and personal, reflecting on the COVID-19 era in an attempt to offer some comfort in the midst of uncertainty. In a press conference prior to the album’s release, the group described the album as a love letter to fans, for fans, and about their fans, but its heartfelt, down-to-Earth nature might actually render it a more accessible listen for non-ARMY members coming off the success of their first English-language hit ‘Dynamite’.

It’s also, for the most part, a much less exciting one, as BE trades the ambitious maximalism of BTS’ recent releases for a more conventional, retro-leaning pop sound; after not quite succeeding in digging deep into their collective psyche with Map of the Soul: 7, it’s somewhat of a disappointment to see the group settle for something even safer, both musically and conceptually. But in narrowing their focus, the Bangtan Boys have managed to bring back some of the emotional sincerity that has always been part of their brand yet hasn’t always translated into their music, starting with the opening track ‘Life Goes On’. Simple in its message of optimism, the single relies on warm acoustics and an uplifting sing-along chorus reassuring us that “Life goes on/ Like this again.” Originally intended to be on V’s mixtape, ‘Blue & Grey’ is a stripped-back, introspective ballad that uses its titular colours to represent anxiety and depression, benefitting from V’s earnest delivery (“If, in a far-flung future, I’m able to smile / I’ll tell you that I did,” goes the closing line) and tenderly lush production.

It’s followed by ‘Skit’, the first non-musical track from BTS since 2017, which captures the septet’s reactions to discovering that ‘Dynamite’ had just debuted at the #1 spot οn the Billboard Hot 100, making them the first-ever K-pop act to lead the list. It’s an endearingly intimate moment, and in theory, the track should serve to highlight the group’s authenticity; but clocking in at 3 minutes, anyone not part of the group’s diehard fanbase might wish they’d used it as intro to an actual song instead. From that point on, as if in direct response to that news, BE shifts into a distinctly more upbeat mood: the glossy, nu disco-inspired ‘Telepathy’ follows the same formula as ‘Dynamite’ but fails to leave any lasting impact, while the jazz-inflected hip-hop of ‘Dis-ease’ taps into the group’s creative energy to deliver something more vibrant and infectious.

The occasionally cheesy songwriting throughout BE might prove to be a turn-off for some listeners, but it’s when the group veers into characterless retro-worship that the project suffers the most. ‘Dynamite’ is as enjoyable a dance bop as any, and certainly the catchiest song on the album, but the glimpses of greatness that could be found on Map of Persona are almost entirely missing. As the closing track to the record, it also poses the question of where the group will go next; it’d be a shame to see them sacrifice their most distinctive and charismatic qualities in a bid to become more palatable to American audiences. Their latest LP may lack the inventive personality of their best work – and it would have probably worked better as an EP – but it’s still largely effective at what it sets out to do: leveraging each member’s talents to offer not just hope but a sense of togetherness during a time of unprecedented isolation.

Album Review: BTS, 'BE'Their fifth and shortest full-length album, BE is somewhat of an oddity in BTS' discography. Arriving just nine months after the K-pop group's expansive, genre-hopping opus Map of the Soul: 7, it presents itself as almost the exact opposite product, yet also feels like a...