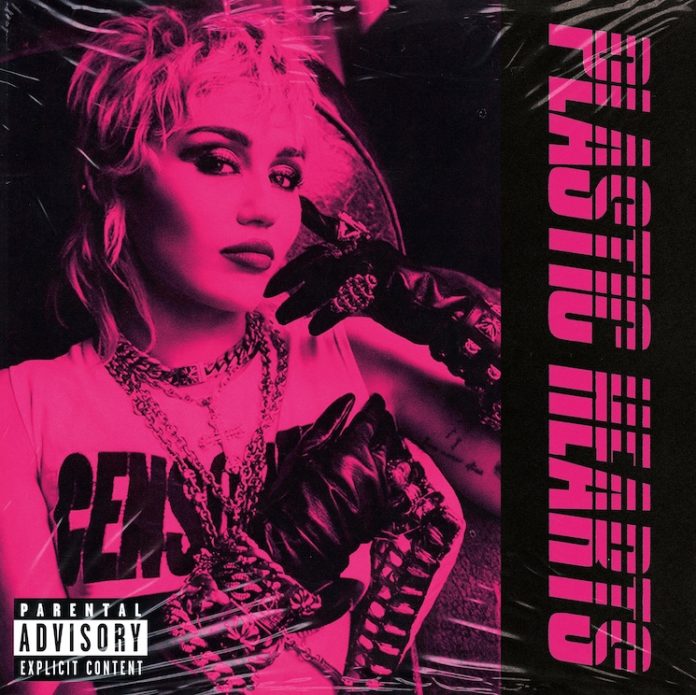 Even the most ardent of Miley Cyrus’ critics are willing to admit that the pop singer has always been a pro at covering other people’s songs (okay, maybe not always). Her iconic rendition of ‘Jolene’, from the first edition of her Backyard Sessions series in 2012, currently sits at over 280 million views on YouTube, and though that’s nowhere near her most viewed videos on the platform, the like-to-dislike ratio is much more favourable. So perhaps the recent popularity of her live covers of The Cranberries’ ‘Zombie’ and Blondie’s ‘Heart of Glass’ shouldn’t be surprising, and yet the fact that they ended up on the digital version of her seventh studio album is somewhat telling; even the singles on Plastic Hearts sound more like interpolations of past hits than original songs – the excellent ‘Midnight Sky’ channels ‘The Edge of Seventeen’ by Stevie Nicks (who also features on the remix), while the Dua Lipa collab ‘Prisoner’ echoes Olivia Newton-John’s ‘Physical’ (which Lipa herself sampled on Future Nostalgia).

And yet, in paying tribute to the artists that pioneered both the sound and the aesthetic that she’s going for here, Cyrus sounds fully in her element. Plastic Hearts may offer only the cleanest, most radio-friendly shade of rock and roll that there is, but the stylings of the genre still complement the natural charisma and grit of the singer’s voice, a quality that’s often been missing throughout her many reinventions. ‘WTF Do I Know’, buoyed by a thick bassline and a driving, pop punk-ish chorus, is about as explosive of an opener as one could have hoped for, while the following title track employs ‘Sympathy for the Devil’ type bongos to interesting but somewhat less thrilling effect. The record starts to lose steam with the formulaic balladry of ‘Angels Like You’ and the catchy but underwhelming duet with Dua Lipa, but Cyrus quickly picks things back up with ‘Gimme What I Want’, a song that’s worth noting simply because it sounds like it’s trying to give Nine Inch Nails’ ‘Closer’ the pop treatment.

But it’s when the singer incorporates the album’s obvious reference points into a vision that’s more clearly her own that Plastic Hearts shines the most. Whil tracks like the Billy Idol-featuring ‘Night Crawling’ lack any sense of originality, ‘Midnight Sky’ utilizes its familiar, 80s-indebted groove to deliver a self-empowerment anthem that not only has populist appeal but also feels like a bold statement on her own artistic evolution. Executed with grace and style, the single oozes confidence without feeling manufactured, a rare moment of brilliance on a record that mostly does a great job of showcasing Cyrus’ gift as a performer but not always as a songwriter. She sure knows how to put on a good show, but when so much of the album’s personal themes are centered around a reclamation of the self, that performativity, as well as the retro aesthetic it’s accompanied by, can sometimes be a hindrance to that message.

Thankfully, the songs on the back half of the album hint towards a more poignantly self-aware direction. The country-inflected ‘High’ is more memorable and potent than almost anything off 2017’s Younger Now, benefitting from the rich, organic notes in the production courtesy of Mark Ronson, Take a Day Trip, and Andrew Wyatt. ‘Hate Me’ sounds more stiff, but the lyrics are strikingly honest: “I wonder what would happen if I die/ I hope all of my friends get drunk and high,” Cyrus sings, before delivering one of the album’s most stinging attacks: “I hope it’s enough to make you cry/ Maybe that day you won’t hate me.” But it’s ‘Never Be Me’ that’s the emotional highlight here: “If you’re looking for stable, that’ll never be me/ If you’re looking for faithful, that’ll never be me,” she admits, her tone wistful but not self-pitying. Miley Cyrus is still struggling to find her own musical identity, but beyond reaffirming the already known fact that she can pull off whatever style she so wishes, Plastic Hearts also offers a glimpse into something more genuine and heartfelt.

Album Review: Miley Cyrus, 'Plastic Hearts'Even the most ardent of Miley Cyrus’ critics are willing to admit that the pop singer has always been a pro at covering other people’s songs (okay, maybe not always). Her iconic rendition of ‘Jolene’, from the first edition of her Backyard Sessions series...