U.S. Girls‘ Meg Remy has announced her debut book, Begin by Telling. A press release describes it as a collection of “illustrated lyric essays depicting memories from early childhood to present day” that paints “a stark portrait of a spectacle-driven country.”

Author and poet Michelle Tea comments, “Begin By Telling explores the horrors and absurdity of being a ‘girl’ in the mediated warscape of America. With sharp emotional intelligence, Remy reveals a cultural systemic rot that begins at with family and fractals out into school, life, the media, the government, and history. Both hallucinogenic and lucid, this work is a radical interrogation of trauma, and a literary salve for the feminist psyche.”

The collection is set for release in the United States on April 21 and in Canada on March 16 via Book*hug Press. Meg Remy’s most recent album as U.S. Girls, Heavy Light, was released in March and landed on our 50 Best Albums of 2020 list. 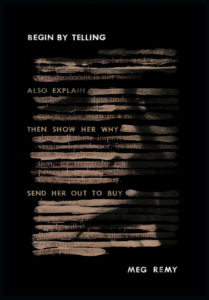