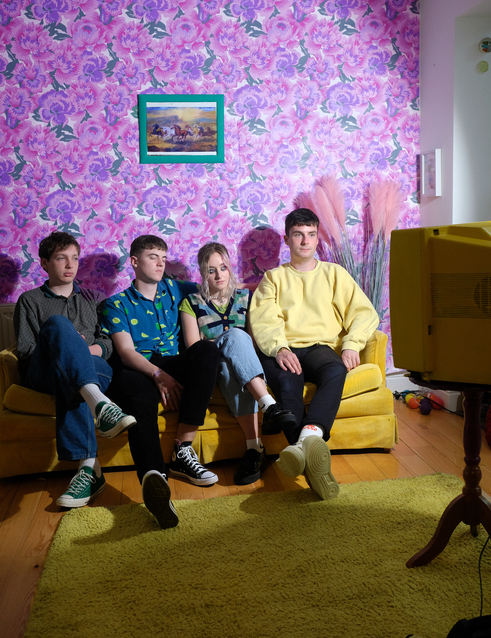 In their own words, NewDad are “fun, easy-going and desperately trying to sound cooler than we are.” Hailing from Galway in West Ireland, the quartet have been making moves in the resurging indie scene currently occurring across the Irish Sea. With their debut EP Waves set to be released early this year, they already have an impressive following and a handful of genuinely exciting singles in their repertoire. Their debut single ‘How’ and follow-up ‘Swimming’ channel the bass-driven, dark energy of a grunge song, which, when melded with Julie Dawson’s vocals, calls to mind No Doubt, while ‘Cry’ – unsurprisingly considering their cited influences – reeks of Pixies in the scuzzy, ringing guitar. Single ‘Blue’ conjures a more introspective sound, reminiscent of The xx in the resounding guitar riffs; it’s in these eclectic soundscapes that the old and the new mix, where NewDad’s ethos of bringing “a fresh take to an old sound” comes to life. Their latest track, ‘I Don’t Recognise You’, is driven by the kind of slacker guitar and killer drum beat that immediately sounds like a Garbage song, recreating the raw dynamism of Shirley Manson’s voice and Duke Erikson’s throbbing guitar work. For a band that for all intents and purposes are just starting out, NewDad are already well on their way to success.

We caught up with NewDad for this edition of our Artist Spotlight Q&A series, where we showcase up-and-coming artists and give them a chance to talk about their music.

Hello! Hope you’re all staying positive and testing negative. This may seem like an odd question, but do you heavily identify with being an “Irish” band? By that I guess I mean do you think you’re influenced by where you’re from and do you think that’s reflected in the music you make?

We think there is something great about being an Irish band right now. The Irish music scene has always been amazing but until very recently didn’t get the attention it really deserved. There’s almost a sense of mystery and introspection behind being an Irish band because of the lack of coverage. In the past few years however a spotlight has really been shone on Ireland due to some really great acts emerging such as Fontaines D.C. and Girl Band, and we think an Irish perspective is something that comes from a really unique position.

We’ve got to talk about the name.. NewDad… where did that come from?

It’s very funny actually. NewDad comes from a random band name generator. It was between NewDad and Pants Two and I think we made the right choice in the end. It does also hopefully work on some level because we like to say we share the same awkward humour and scared enthusiasm that a real new dad would face with the task of raising their first child.

Who do you class as your biggest musical influences? Not necessarily the people who you think you sound similar to, more who resonates the most with you and in turn inspires you to create music?

We are all massive fans of bands like Pixies and The Cure and have been for a long time! So definitely their music was a huge influence and sparked our love for a lot of other alternative rock bands old and new! We don’t particularly try to sound like any of the bands we love but definitely hearing Doolittle for the first time is what made a lot of us want to be in a band in the first place!!

How did you all meet? What’s the story of your formation? Did it happen organically or did you set out with intent to form a band?

We all went to school together! One day a few of us were actually out mitching school and we bumped into each other in a cafe and just started talking about it how we all love playing music and wanted to start a band so we thought we would give it a shot! We also needed something to do for our music practical because none of us liked performing alone and it’s nice to have people do a scary practical with 🙂

I can’t even remember the first song we wrote – it was so long ago and we have probably all blocked it from memory at this stage! Our very early songs were definitely not as focused as what we are writing now, I suppose we have just matured a bit since then. The title track of our debut EP, Waves, was actually written way back when we were still practicing in a shed in the early days but it’s gone through changes along the way to make it the tune it is today.

The music video for your latest single ‘I Don’t Recognise You’ is pure feel-good nostalgia. The pink big block TV genuinely is a delight to see and Jaffa Cakes against the backdrop of a campervan, it’s the stuff of British childhood holidays and I’m here for it. Talk me through the inspiration for it, how did the vision come about?

We took a lot of the initial vision for the video from the ‘Strawberry Fields Forever’ music video. We loved how it was able to play off the props and scenery around it and create a narrative around them that left a lot of interpretation to the people watching it. We had another idea that fell apart because we went into a stricter lockdown, so it was a little bit of a rush getting everything together for the shoot, but we are so happy with how it came out. We let the set deteriorate and get messier as the visuals got more erratic and frantic. We had this idea as it ties in with the theme of someone slipping away. We had a lot of fun filming with Wojciech and Jamie and just made the most of the day. We thought if we were having a good time, it would be expressed through the video!

And finally, what’s a track you’re currently all listening to, something that’s managed to get you through 2020?

Oh definitely ‘Smile Like You Mean It’ by The Killers. Absolute banger! We have just been singing it and playing it so much it’s such a feel-good song and I suppose that’s exactly what we all need this year with everything going on.

NewDad’s Waves EP is set for release in early 2021.