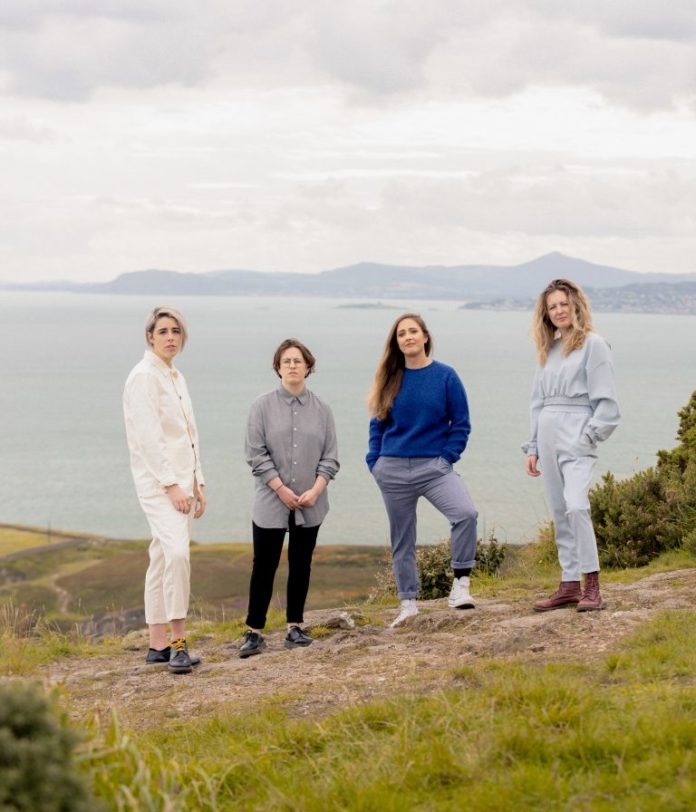 Irish queer quartet Pillow Queens have been doing things differently since their formation in 2016. Having grown tired of playing for kicks, the foursome – composed of Sarah Corcoran and Pamela Connolly on lead vocals, Cathy McGuinness on lead guitar, and drummer Rachel Lyons – decided to come together to give their music career a real chance. They made their mark with their debut EP Calm Girls, which featured the scrappy fan favourite ‘Rats’, a track that emits a “give a fuck” attitude while maintaining an overarching sense of sincerity. Their sophomore outing, 2018’s State of the State, boasted the searing track ‘Gay Girls’; anchored in moody guitar riffs and haunting wails, the song is a masterclass in build-up and control, switching tempo, key and tone throughout the song’s verses, chorus, and a surprisingly airy bridge. Featuring the aforementioned tracks as well as ‘Brothers’ and ‘Handsome Wife’, their debut album In Waiting arrived late last year. Exploring themes of sexuality, religion, politics and life’s larger questions, the gripping LP ultimately hinges on positivity and vitality; a vitality that comes through living life vivaciously.

We caught up with Pillow Queen’s Pamela Connolly for this edition of our Artist Spotlight Q&A series, where we showcase up-and-coming artists and give them a chance to talk about their music.

It’s the question that’s difficult to avoid… but how has life been since March? What’s been the most positive thing that’s happened to you all, a ray of hope in all the madness?

Well, releasing the album has been such a source of joy for us over 2020. During the initial lockdowns it kept us busy organising, and distracted us from the doom of the outside world. When we were finally able to share it in September it was another hit of much needed serotonin for us despite it having to be done in a less than normal way.

You’ve flourished a lot as a band since Calm Girls (‘Rats’ still hits different though). Yet what’s the biggest difference that you all notice about the way you go about making music? Was the experience of making In Waiting noticeably different?

I think our sound is a lot bigger since our first releases as a band. We’re so much more in tune to the minutia of the overall sound. We know ourselves and each other so much more than when making In Waiting, while it felt superorganic and flowed in a way that it hadn’t before, we also had the patience to nitpick at every detail till we felt it sounded the way we all collectively wanted it to.

Do you all have a personal favourite track you’ve ever created or is that like choosing your favourite child?

It is quite like choosing a favourite child. I think we all love the closing track ‘Donaghmede’ as the majority of it was formed in the studio and feels like it embodies what it was like the entire record.

Your debut album In Waiting truly feels like a staggeringly accomplished encapsulation of what makes Pillow Queens, Pillow Queens. Before you started recording, did you have a specific vision or direction you wanted to go in or was it more of an exploration as you went along?

Recording was very exploratory, and certain things came out of it that we hadn’t expected going in. What we did want to accomplish was a sound that mimicked the grandness of our live show, and to make an album that would only make our live show grander. We’d hoped to create an album that would become a touchstone for people. We don’t know if we’ve accomplished that yet but here’s hoping!

What do each of you cite as the most seminal album for you in terms of the development of your music taste?

We all have very varied music tastes, though when it comes to Pillow Queens we all reference very similar artists. Early on, and still, we cite the likes of Weezer and the Pixies. For this album we would listen to Manchester Orchestra, particularly their Mean Everything to Nothing or Simple Math album. Mostly for their ability to create a sound so big and then pull back to something tender so effortlessly.

It’s certainly something we’re conscious of. Growing up listening to a lot of music from outside Ireland you tend to just end up singing in a fairly neutral accent. We want people to have an instant recognition of where we’re from when they listen to our music as we think it gives a little more context to who we are. We love the way we sing, and we like that people enjoy it but it’s just our preference. If when you sing your accent doesn’t come out, more power to you. Music is escapism and the way someone chooses to express their art is completely up to them.

What’s your favourite collective memory as a band, a moment that you each remember and sticks out for whatever reason?

We played a festival last year called All Together Now. We had a moment where the crowd in the tent were singing along to ‘Rats’. While this is usually a song that gets accompanied with a crowd, it was the sheer amount of people. The wall of sound permeating back at us. It was completely overwhelming to all of us. In excitement, Rachel decided to throw one of her sticks but didn’t it just wallop me in the head and then the moment was over.

Pillow Queens’ In Waiting is out now.