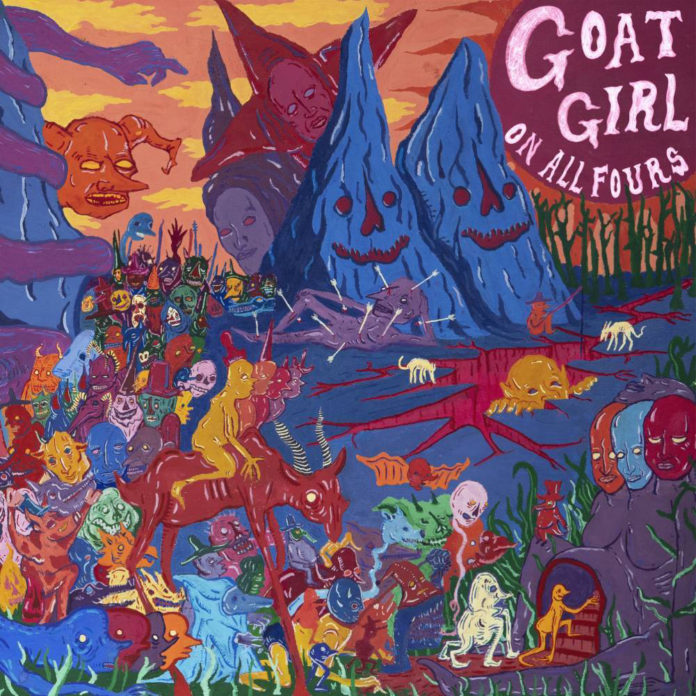 The gap between a band’s debut album and its follow-up is always fraught with danger, but the journey has been more difficult for Goat Girl than most. Signed with Rough Trade when they were still teenagers, their 2018 self-titled record was widely acclaimed; a sense of indie ascension was palpable. Then an unprecedented pandemic hit, they lost their bassist, and the band’s Ellie Davis was diagnosed with Hodgkin lymphoma (after undergoing chemotherapy, she is thankfully in remission now). A lesser group might have crumbled under the duress of these challenges, but Goat Girl is built differently and On All Fours is a reflection of this. A little of the fire and fury of their searing debut has gone, but the end result doesn’t lack for its absence, instead revealing an increased level of maturity and wariness.

Goat Girl first emerged as one of the leading lights from the fertile South London scene based around Brixton’s The Windmill, but while On All Fours ostensibly remains a post-punk record, it takes them further away from the style of peers like Shame than they’ve ever been; off-kilter melodies, languid vocals, and swirling synths will do that. The rhythm is more melodious and playful, a closer touchstone being the bubbling and rambunctious electronics of Stereolab, particularly on songs like ‘Sad Cowboy’, ‘Badiba’, and ‘Where Do We Go From Here?’ More examples of imaginative instrumentation abound: ‘Closing In’ is buoyant and funky; ‘Once Again’ is filled with tuneful guitars and an emphatically rushing rhythm; ‘Jazz (In The Supermarket)’ adds the extra textures of a trumpet and viola on a near-instrumental track. ‘P.T.S. Tea’ is perhaps the only instance where the band wears their influences too prominently on their sleeves, as the song could easily be an outtake from Metronomy’s The English Riviera (the track’s witty title excuses any such misgivings).

It’s the opener ‘Pest’ that sets out Goat Girl’s atmospheric stall: hushed intimidation. Lead singer Lottie Pendlebury whispers softly but menacingly throughout, whether on the relatable millennial melancholia of ‘Anxiety Feels’ (“I don’t wanna be on those pills/ Heard they make you numb/ Find another way to get my fill,” she sighs amidst a lilting and lush rhythm) or on the more biting takedown of a lowlife on ‘Where Do We Go From Here?’ (“I’m sure it stinks under his skin/ Where pores secrete all the hate from within”). Songs like the latter are where Goat Girl stray from old London standards in their lyrics. Where The Libertines and various NME acolytes romanticised the messiness of the city, Goat Girl are among those who see it for what it is, a flawed and troubling place. Their songs are tales from the night bus, crossing London, taking the listener home from a gig, a bar, gazing from the window and seeing anxiety and disillusionment.

The lyrics betray a consistent fascination with body horror that becomes a thematic throughline: “Now I’m itching/ Nailing poison/ Bitten by her snake,” Pendlebury cries on ‘A-Men’. The band cleverly relates the idea of contamination to subjects like the current climate crisis and mental health. “Littered seas, feels like we’re an infection,” they ponder on ‘Badiba’; the line “Feel the burning on the skin/ Feel the turning come from within” is tied to deteriorating mental health after a breakup in ‘They Bite On You’. The comfort between the band’s members is so clear and there’s a real elasticity to their play. On ‘Badiba’, for example, each member swapped instruments for the track, yet it still sounds tight and streamlined.

On All Fours was produced again by Dan Carey, the person behind Speedy Wunderground and producer of recent records by the likes of Fontaines D.C., Black Midi, Squid, and Kae Tempest. Clearly Carey and Goat Girl have developed a growing partnership, judging by On All Fours’ increased experimentation and blossoming musicality. Carey’s other partnerships have found reward: Black Midi’s Schlagenheim was nominated for the 2019 Mercury Music Prize; Fontaines D.C.’s A Hero’s Death went even further, earning a Grammy nomination for Best Rock Album. With its combination of sombre but sharp lyricism and evocative, exploratory instrumentation, On All Fours deserves at least similar plaudits for Goat Girl.

Album Review: Goat Girl, 'On All Fours'The gap between a band’s debut album and its follow-up is always fraught with danger, but the journey has been more difficult for Goat Girl than most. Signed with Rough Trade when they were still teenagers, their 2018 self-titled record was widely acclaimed; a...