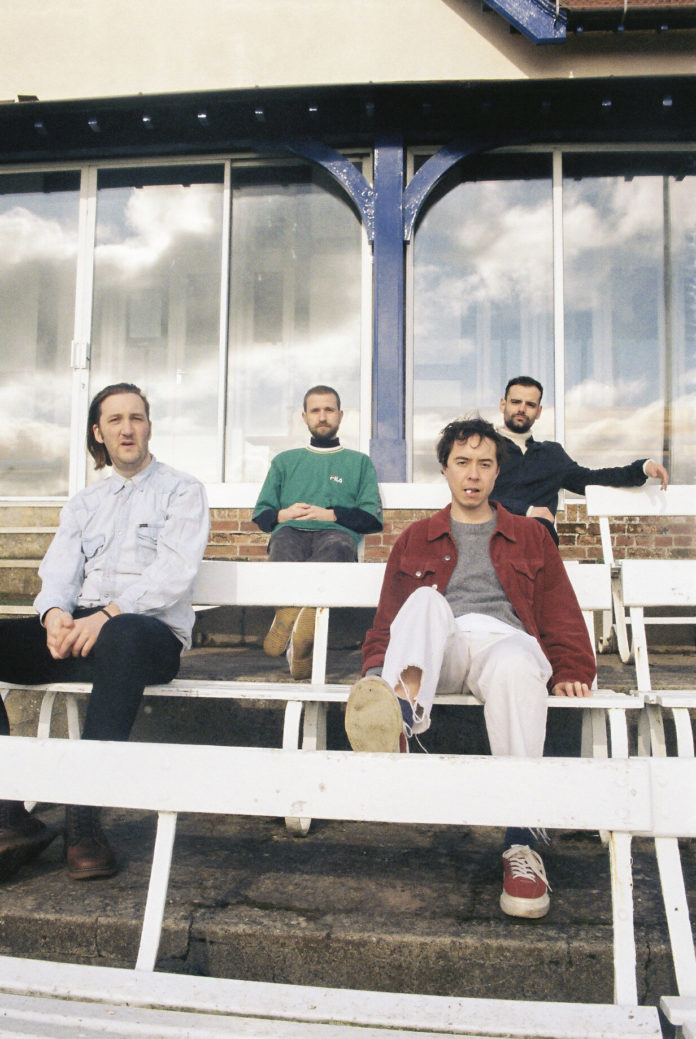 After meeting in a ceramic arts class and bonding over rap music and, well, pottery, vocalist Ash Cooke and drummer Charlie Clark came together to further explore their creative synchronicity. Relocating to Oxford, the pair enlisted the help of synth master James Cunning and bassist Patch Burley to form the quartet that is BE GOOD, so named after 96-year-old chemistry professor John B. Goodenough. Releasing tracks in 2017 initially as a response to suburban inertia, BE GOOD self-released their debut EP God Of Nowhere in 2019. Featuring the suave, jazz-inflected ‘Nightbus’ and their woozy debut single ‘It’s Cool But It Ain’t You’, the EP served as a slick, dreamy taste of the colossal feelings that exist in the mundane. Their recently released sophomore EP, Everything’s Alright in the Evening, further explores this delightful dichotomy, building upon a world of inconsequential events that feel monumental, namely young love and yearning.

Completed in a remote farm cottage in the north of England during UK lockdown, Everything’s Alright in the Evening feels intimate; like the band opening up to, more than anything, themselves. Opener ‘Young Strangers’ pulses with a nervous energy, mirroring the sickly sweet feelings of first love through stabbing synths and layered piano, while ‘Dark Glasses’ boasts a hypnotic aura thanks to its trilling guitar riff chorus, and ‘Interlude (LGW-SXF)’ emulates a tender, swelling sensation. Mellow yet uplifting, Everything’s Alright in the Evening works in dichotomies to create a textured soundscape that sticks long after the final track plays out.

We caught up with BE GOOD for this edition of our Artist Spotlight Q&A series, where we showcase up-and-coming artists and give them a chance to talk about their music.

The questions that seems flippant but is more crucial than ever in these strange times; how are you? What’s been the thing that’s kept you going recently?

Ash: We’re doing okay, thanks. It’s been a tough time but we know there are lots of people who’ve had it a lot tougher than us. Friends and family have kept us going. Striving to create good things and put good work into the world has kept us going. Charlie and I live together so luckily we’ve been able to carry on making music even though we’re currently in lockdown again in the UK, although we’re missing Patch and James very much.

Your sophomore EP Everything’s Alright in the Evening was released recently. First off a big congratulations, it’s genuinely a stunning listen. What was the biggest hurdle for you guys when making the EP?

Ash: Thank you!! A lot of this EP was made during 2020 so we faced some difficulties with the recording process and weren’t able to be in the same room with people we were working with. In the end we did almost everything from home and we were able to make progress through zoom calls and wetransfers and whatsapp groups. Perhaps because of that, the EP has somewhat of a patchwork feel to it which I’ve come to really like. Towards the end of the process I was struggling with some of the final lyrics and vocals, so I went to a little cottage on the edge of a farm for a little while. It was quite remote and there was nothing to do, but I spent a lot of time watching the goats in the goat pen opposite the window that I worked at. The change of scenery really helped. By the end of those 10 days the lyrics for the remaining songs were more or less finished.

What’s the biggest progression or rather change that you’ve made as a band since your debut EP God of Nowhere back in 2019 and going further back your debut single ‘It’s Cool but It Ain’t You’?

Ash: We used to be very protective over the entire writing and recording process. For our first EP we wrote everything, produced everything and mixed everything ourselves. This new EP has been a process of accepting and inviting collaboration – it was the first time we invited other vocalists to sing on our songs, we worked with our housemate on lyrics and we worked with some amazing mixing and mastering engineers to take the songs to the finish line. It takes a certain self-belief to go it alone and we want to keep that spirit in the work we make. But it takes another form of self-belief to invite other people into the process and know that the music will still stand up as a true representation of who we are as a band.

You took inspiration for the name of your band from the Nobel Prize for Chemistry winning scientist John B. Goodenough. Why, what about him made you decide to name your band after him?

Ash: John B. Goodenough made breakthroughs in the 70s which led to development of the lithium ion battery. He did that work just a few miles from where we live in Oxford and I’ve been intrigued by him for a long time. I read a lot about him and watched every video on youtube I could find of him. I found it strange that he wasn’t more well known, so when we came up with our band name we thought it would be a cute little tribute to him. But anyway, he won the Nobel Prize a couple of years ago which is perhaps a greater honour than being our namesake.

The visual for ‘Young Strangers’ feels beautifully aged, sort of like it was created outside of time. It’s both vintage and grounded in the present. Was this purposeful, something you set out to achieve or did it come about naturally?

Ash: It was definitely something we discussed with the director Joe Vozza in terms of the locations and styling. This particular song and video have some obvious 80s influences but hopefully feels modern. I think the best art lives in the present but has one eye on the past. We want our videos to look like they could be set any time in the last 40 years. The idea of suspended time or being outside of time is something that we try to explore with our music and visuals. Growing up in suburbia it sometimes feels like years can go by and nothing really changes.

You’ve been sharing little tidbits, stories and BTS photos etc on your Instagram recently from the making of the EP. Do you think it’s important to be transparent and inclusive with your listeners? By this I guess I mean do you place a lot of value on sharing these moments with fans/listeners?

I sometimes feel uneasy about being too transparent with explanations of what songs or videos are “about”. As an artist you want listeners and viewers to be able to approach the music and videos with the freedom to bring their own interpretations and relate them to their own experiences. I see videos where artists break down the meaning behind every single line of a song and that just feels like spoon-feeding. Having said that, I think some gentle sign-posting towards the ideas behind songs can probably enrich a listener’s experience sometimes so that’s what we tried to do.

On the more technical side of things, we like showing fans and listeners BTS footage of recording music or filming music videos as it shows that you can make great stuff with shitty equipment. We still record almost everything using a microphone I bought for £100 when I was 16.

And lastly what have you guys been spinning recently? What did your January 2021 sound like?

James: Tomberlin’s At Weddings works really well in early evening winter half-light. Harmonia and Eno’s Tracks and Traces is beautiful, human synth magic, and I keep going back to everything Mark Hollis ever did at the moment.

Charlie: Puma Blue’s debut album In Praise of Shadows has been on repeat for me. I really like how restrained and precise the arrangements are and I love the intersection of the songwriting with his jazz and R&B influences. Also, Welcome to Conceptual Beach by Young Jesus from last year. I just discovered it, but that record contains a lot of the elements of Math rock, Emo and Indie that reminds me of the bands I’d go and see in Oxford growing up.

Ash: I’ve been listening to Sunset Rollercoaster’s new album SOFT STORM. Also, listening to Duval Timothy has been a revelation.

BE GOOD’s Everything’s Alright in the Evening EP is out now.