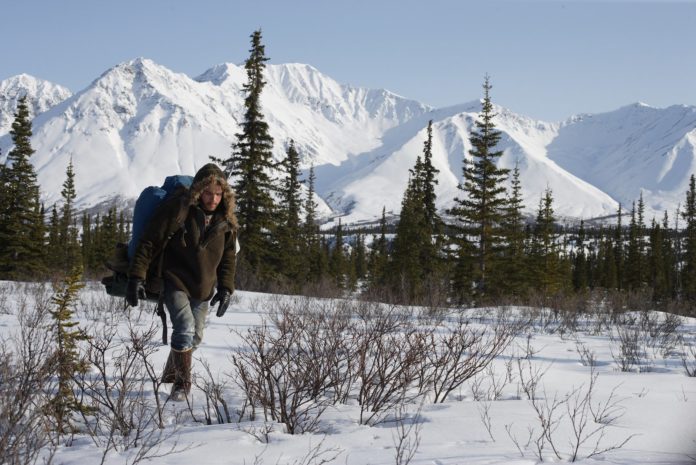 Into the Wild is based on the true story of Christopher McCandless, who on his travels adopts the moniker ‘Alexander Supertramp’, as he abandons his family in favor of a quest for freedom. After graduating from college in 1990, he leaves behind his sister and abusive parents and spends two years traveling, hitchhiking, camping, hiking, and discovering himself.
Chris hopes to discover what makes people happy in life, believing that money and employment make people too cautious. His goal is to make it to Alaska, where he will be able to escape “society” and “just live”. He spends his time reading, meeting new people, and getting in touch with who he really is.
Emile Hirsch gives a raw, touching performance as McCandless, who left behind various writings and photographs that Jon Krakauer used to write a non-fiction book about the young man’s journey, which has inspired many people around the world. The film was written and directed by Sean Penn, featuring an extensive narration from Christopher’s sister Carine (Jena Malone), offering insight into Chris’s childhood and why he’s so adamant to leave his old self behind without a trace.

Best Quotes From The Breakthrough Movie

Apart from the moving storyline, this exceptional 2007 movie also brought compelling life lessons and quotes that one can apply in real-life situations. If you’re a fan of the movie or of its characters, especially Christopher McCandless, their lines and dialogues aren’t only inspiring but remarkable enough to land a spot in your social media feed. Click here for the best selfie quotes ideas.

Christopher is a soulful, introspective, contemplative human. He’s always reading, writing, or trying to learn more about the world around him. Even without narration, the film has a very literary quality. Here are sixteen of the best quotes from Into the Wild.
Christopher McCandless: When you want something in life, you just gotta reach out and grab it.
Christopher McCandless: What if I were smiling and running into your arms? Would you see then what I see now?
Christopher McCandless: You are really good. I mean, you’re like, a hundred thousand times better than, like, any apple I’ve ever had. I’m not Superman, I’m Supertramp, and you’re Superapple. You’re so tasty, you’re so organic, so natural. You are the apple of my eye, ha!
Christopher McCandless: The sea’s only gifts are harsh blows, and occasionally the chance to feel strong. Now, I don’t know much about the sea, but I do know that that’s the way it is here. And I also know how important it is in life not necessarily to be strong but to feel strong.
Christopher McCandless: The core of mans’ spirit comes from new experiences.
Christopher McCandless: Happiness [is] only real when shared.
Christopher McCandless: I’m going to paraphrase Thoreau here: rather than love, than money, than faith, than fame, than fairness – give me truth.
Ron Franz: There is some kind of bigger thing that we can all appreciate and it sounds to me you don’t mind calling it God. But when you forgive, you love. And when you love, God’s light shines on you.
Christopher McCandless: Mr. Franz, I think careers are a twentieth-century invention, and I don’t want one.
Christopher McCandless: My days were more exciting when I was penniless. I’ve decided I’m going to live this life for some time to come. The freedom and simple beauty is too good to pass up.
Christopher McCandless: If we admit that human life can be ruled by reason, then all possibility of life is destroyed.
Christopher McCandless: Two years he walks the earth. No phone, no pool, no pets, no cigarettes. Ultimate freedom. An extremist. An aesthetic voyager whose home is the road. Escaped from Atlanta. Thou shalt not return, ’cause “the West is the best.” And now after two rambling years comes the final and greatest adventure. The climactic battle to kill the false being within and victoriously conclude the spiritual pilgrimage. Ten days and nights of freight trains and hitchhiking bring him to the Great White North. No longer to be poisoned by civilization he flees, and walks alone upon the land to become lost in the wild. – Alexander Supertramp May 1992
Christopher McCandless: I don’t need a new car. I don’t want a new car. I don’t want anything – these things, things, things, things.
Wayne Westerberg: What are you doing when we’re there? Now you’re in the wild, what are we doing?
Christopher McCandless: You’re just living, man. You’re just there, in that moment, in that special place and time.
Carine McCandless: Chris measured himself and those around him by a fiercely rigorous moral code. He risked what could have been a relentlessly lonely path, but found company in the characters of the books he loved from writers like Tolstoy, Jack London, and Thoreau. He could summon their words to suit any occasion, and he often would. I forgot to ask what quote he’d have picked for his graduation dinner, but I had a good idea of who the primary target would be. It was inevitable that Chris would break away. And when he did, he would do it with characteristic immoderation.
Christopher McCandless: I don’t need money. Makes people cautious.
Share
Facebook
Twitter
Pinterest
Linkedin