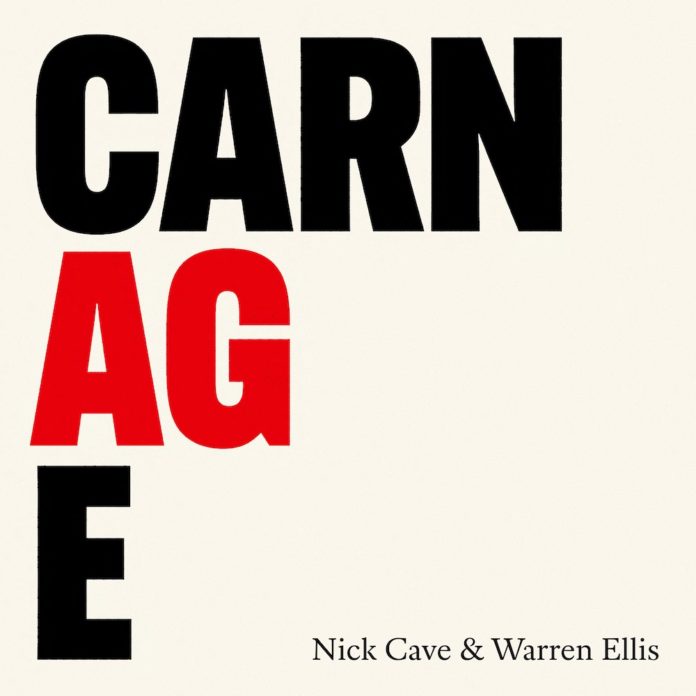 2019’s hauntingly beautiful Ghosteen may have been the final installment in what Nick Cave has described as a trilogy of albums, but the glimmers of hope that seeped through its serene, ethereal soundscapes gave way to no real conclusion. Once again eschewing narrative conventions for a more impressionistic style of writing, Cave’s new album with longtime Bad Seed and close collaborator Warren Ellis is similarly if not more amorphous as he circles back to familiar images and motifs that have been prevalent throughout his career. On Ghosteen he was “a lonely rider across the sky,” and here he keeps referring to “that kingdom in the sky,” some eternally bright light we’re all ceaselessly pursuing. Even the album’s title seems to harken back to the lurid horror of his work in the 1980s. Far from a nostalgic release, however, Carnage reckons with themes of death, suffering, and the apocalypse through a lens that’s more suited to both Cave’s personal and artistic trajectory and the current state of the world.

Written during the early stages of lockdown and surprise released last week, Cave and Ellis’ first non-soundtrack album as a duo leans into the stark minimalism of their recent material while pushing their sound – sometimes tentatively, sometimes more aggressively – into bold new territory. As a result of their relatively freeform approach, Carnage may lack the sense of cohesion and progression that has defined even some of Cave’s more recent output, but its unpredictability has a way of not only reflecting the uncertainty of the past year but also creating some gripping contrasts. Sonically, the record careens from the ominous strings and industrial electronics of opener ‘Hand of God’ to the menacing synth bassline of ‘Old Time’ and the droning ambiance of ‘Shattered Ground’. But none stand out as much as ‘White Elephant’, the album’s centerpiece and also its most harrowing moment. Propelled by subterranean bass and rumbling percussion that mirrors the deranged state of its elusive, white supremacist protagonist, the track soon explodes into a transcendent sing-along equal parts hopeful and unnerving: “The time is coming, the time is nigh/ For the kingdom in the sky.”

Even at its most autobiographical, Cave’s writing is often infused with spiritual and poetic elements, but here it also bleeds into the collective. “I am […] well acquainted with the mechanics of grief — collective grief works in an eerily similar way to personal grief, with its dark confusion, deep uncertainty and loss of control,” he recently wrote in The Red Hand Files. The most compelling contrast that Cave’s lyrics explore on Carnage isn’t that of the personal and the collective, however, but rather comes through in the tone and vision he adopts: the way he oscillates between the surreal and the ordinary, drawing attention to the points where the two intersect. As he put it in a press release, these are songs that emerged from a period of “sitting on my balcony thinking about things,” but they also just “fell out of the sky.” On ‘Old Time’, he sings of “a strip of ordinary sun, a biblical sun/ A colonial sun, an enlightened sun/ The same sun/ Made always glorious at your head.” He sums up what the record is about – or rather, where it takes place – on the final track, ‘Balcony Man’: “Where everything is ordinary until it is not.”

The album’s formlessness can have the effect of diluting its impact, particularly towards the album’s meandering second half, but Cave and Ellis offset any lack of direction by heightening both the emotional immediacy and immersive atmosphere of the songs. As Cave sings “I’m going to the river/ Where the current rushes by,” a wave of synths ushers in, as if to embody the religious figure at the center of the song and establish the power the music holds throughout the album. Cave himself shifts perspectives multiple times, but it’s the moments where he’s the most direct that strike a deep emotional chord: the meaning of the songs may be up to interpretation, but the intimacy, loneliness, and romantic idealism that ballads like ‘Albuquerquee’ and ‘Lavender Fields’ communicate are more resonant now than ever.

A woman waves goodbye on the penultimate track, ‘Shattered Ground’, but this is far from the end. Cave leaves us with one final scene, in which a domestic setting becomes a source of fantastical joy: “Where everything is amazing that stays in bed/ I’m a two hundred pound octopus under a sheet.” The unrelenting forces of death and destruction loom as large as ever, but Cave allows himself to capture the moments of peace in the midst of – and borne out of – the madness around and within him.

Album Review: Nick Cave & Warren Ellis, 'Carnage'2019’s hauntingly beautiful Ghosteen may have been the final installment in what Nick Cave has described as a trilogy of albums, but the glimmers of hope that seeped through its serene, ethereal soundscapes gave way to no real conclusion. Once again eschewing narrative conventions...