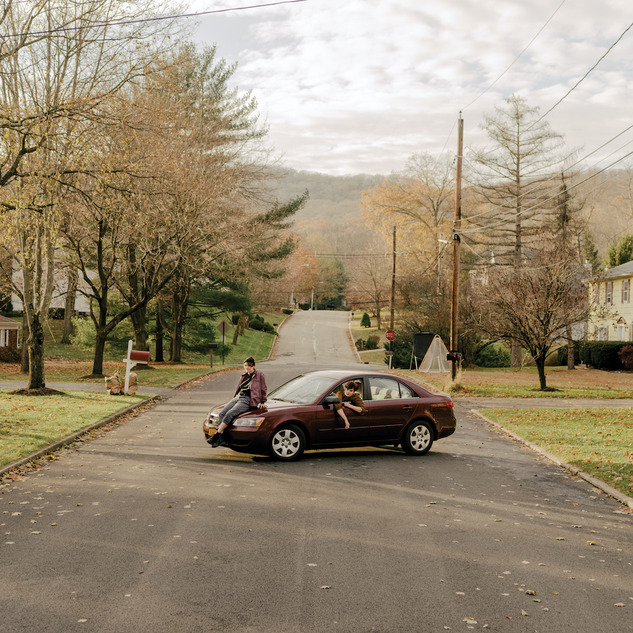 Towards the end of Adult Mom’s new album, in the middle of exposing the cracks in communication and general messiness that comes in the aftermath of a breakup, singer-songwriter Stevie Knipe sings of how “all of our guilt/ Is collectivized in ill-written iPhone notes.” You can hardly describe Knipe’s lyrics as “ill-written” – that line alone proves otherwise – but the diaristic, confessional nature of their writing means it’s easy to imagine the words first coming to life against that infamous light background, conceived less as a means of self-expression than mere self-preservation: letters to self that gently found their way into a song, or at least immortalized in the form of a tweet. And while the songs themselves are both witty and treated with care, it’s the imperfections that come with this brand of raw honesty that makes them so endearing.

None of these qualities have gone away on Driver, Knipe’s third LP as Adult Mom, which deploys a brighter and more expansive palette without sacrificing the project’s trademark intimacy. If anything, the album’s tasteful, breezy arrangements – whose most immediate reference point is the renewed openness of Waxahatchee’s Saint Cloud – only accentuate the warmth that Adult Mom’s music has exuded ever since 2015’s spare Momentary Lapse of Happily, coating even its most melancholy and uncomfortable sentiments in layers of self-aware irony and candor. The mood of the record might be better conveyed through memes than a formal review, but I find the opening lines of ‘Checking Up’ to be aptly evocative: “Thick snow, I fall down in it slow/ I retreat to its pillow.” Knipe has a way of taking the cold, mundane realities of life and transmuting them into something lighter and almost soothing.

Driver is full of quotable lines, but quoting them doesn’t always reflect the effect they have in context or illustrate Knipe’s knack for poignant storytelling. Perhaps the most memorable one arrives on the album’s centerpiece, ‘Sober’: “The only thing that I’ve done/ This month is drink beer and masturbate, and ignore phone calls from you/ What else am I supposed to do.” But just as the song’s lo-fi, bedroom pop backdrop builds into something clearer and punchier, Knipe’s assured delivery guides the song to its expected yet cathartic conclusion: “Now I don’t even think of you when I am sober.” Part of the reason that line holds such emotional weight also has less to do with its wry humour than how Knipe sets it up a track earlier, depicting a scene where a stranger had given them and a friend a beer as evidence of a time when drinking was less a means of killing time than slowing it down. “I was just trying to get to know you,” they sing, letting the you fly from their mouth like a fond memory.

Knipe’s growth as a songwriter is palpable on Driver, their best and most fully-realized effort to date, and it resonates partly because that yearning for growth has been such a running theme throughout their discography. (“God, I can be so relentless/ But at least I’m not afraid anymore,” they admit on ‘Adam’, throwing in an “I think” for good measure.) But Knipe never alienates any potential new listeners, weaving a thread around seemingly disparate moments that may not add up to a coherent narrative but are tied to a particular place, or more often, the things that lead to it: “On the cusp of the state line/ New England to Westchester/ On the cusp of loving/ And resenting each other.” It’s no wonder driving plays such a recurring role on the album, less so for its obvious connotations than its ability to violently bring back memories. There are musical references ranging from Hole’s ‘Violet’ to ‘I Will Survive’, but Driver glides to its own rhythm. Knipe may not always disclose the full details of their destination, but they’re kind enough to save us a seat.

Album Review: Adult Mom, 'Driver'Towards the end of Adult Mom’s new album, in the middle of exposing the cracks in communication and general messiness that comes in the aftermath of a breakup, singer-songwriter Stevie Knipe sings of how “all of our guilt/ Is collectivized in ill-written iPhone notes.”...