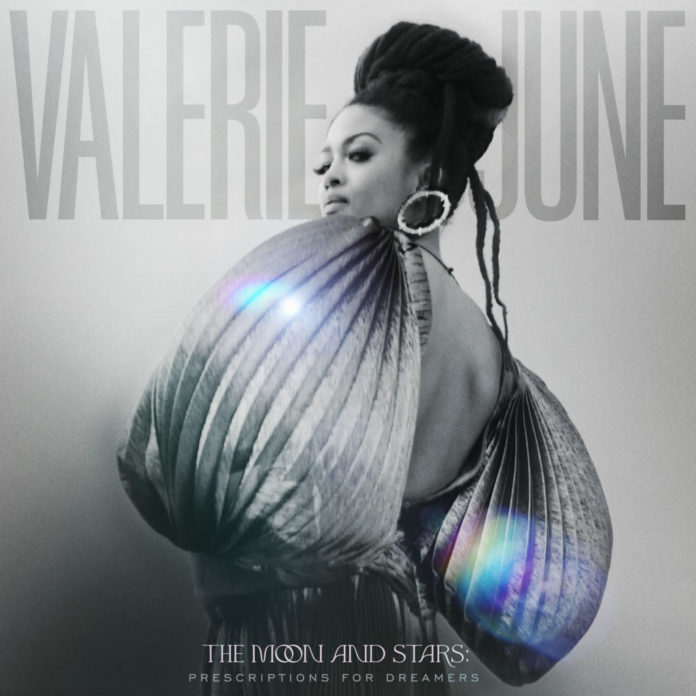 Over the past decade, Valerie June has earned a reputation for her soulful blend of folk, blues, and Appalachian bluegrass. Rising out of the Memphis scene in her twenties, the Tennessee-born singer-songwriter’s breakthrough came in 2013 with her label debut, Pushin’ Against a Stone, which was co-produced by Dan Auerbach of the Black Keys. It took her another four years to refine her sound, but 2017’s The Order of Time brought her further acclaim and a name-check from Bob Dylan. That album found her “dancing on the astral plane,” as she sang on one of its highlights, a place she assures us she’s all but left on her latest full-length release, The Moon and Stars: Prescriptions for Dreamers. If the title alone strikes you as overly romantic, a single listen is enough to stave off cynicism: June embodies that ideal with profound earnestness and an infectious sense of optimism that’s grounded in reality and years of experience.

Her voice, a distinctive drawl that’s both mesmerizing and elastic, is her greatest asset in spreading that joy and positivity. She uses hope as a form of resistance on ‘Smile’, a song inspired by the civil rights marches of the 60s that took on a new resonance in the wake of last summer’s Black Lives Matter protests. Despite the familiar warmth of its pop-leaning production – it’s in that department that some of her previous albums have suffered – the song never loses its urgency, leaning on the kind of stirring melodies that anchor and elevate much of the record. She maintains that hopeful outlook when meditating on personal losses, and the album’s best moments match swelling arrangements while foregrounding June’s vocals as they stretch from calm and reflective on the ethereal ‘You and I’ to a full-throated growl on ‘Call Me a Fool’, one of two tracks featuring soul legend Carla Thomas.

Aided by co-producer Jack Splash, known for his work with Kendrick Lamar, Solange, and Alicia Keys, as well as string arranger Lester Snell, June sets her candid reflections against a more sprawling canvas that includes nods to modern hip-hop stylings (as in ‘Within You’) without disrupting the organic flow of the album. The elegant backdrop never overshadows June’s thrilling performances, though it occasionally feels too weightless to carry them; ‘Why The Bright Stars Glow’ and ‘Two Roads’ add little towards the back end of an album that runs a bit too long. On the whole, however, one of The Moon and Stars‘ most immersive qualities is the way it plays with space, interspersed with ambient interludes that provide both texture and an earthly respite from the album’s cosmic ambitions.

No song here makes a better case for June’s romanticism than early highlight ‘Colours’. Where other tracks rely on the strength of her voice and conviction, ‘Colours’ most powerfully communicates her message through her evocative songwriting: we find her lying awake in the middle of a cold night, “Giving it all up to the darkness/ Just to see/ Just to visit with the light,” eyes welling up at the thought of all it took just to get there. There’s no mention of the moon or the stars, no worldly details either, just the forces of hope and fear battling it out. “Colors of orange, red, black and green/ They all have me bursting at the seams/ And I know that every day/ It is a dyin’ day,” she sings in the chorus; the second time, the final line becomes “It is a livin’ day.” By the time she repeats the old cliché that “life is just a song,” it’s obvious why she pours so much heart and soul into her music, and why it feels like she’s urging us to do the same in everything else: “And it goes on and on and on and on and on.”

Album Review: Valerie June, 'The Moon and Stars: Prescriptions for Dreamers'Over the past decade, Valerie June has earned a reputation for her soulful blend of folk, blues, and Appalachian bluegrass. Rising out of the Memphis scene in her twenties, the Tennessee-born singer-songwriter’s breakthrough came in 2013 with her label debut, Pushin’ Against a Stone,...