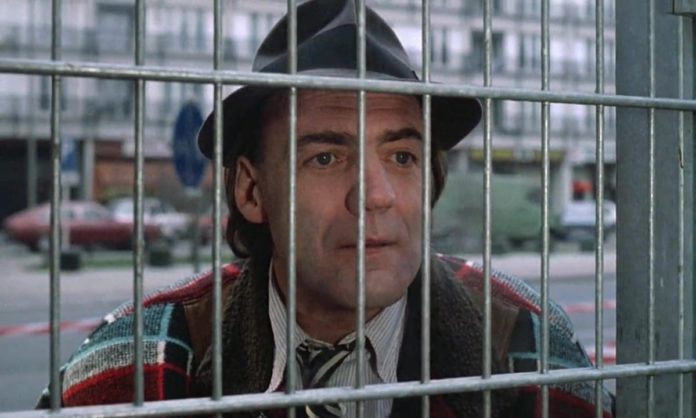 In this German fantasy film by Wim Wenders, Bruno Ganz stars as Damiel, an angel who wishes to become mortal. He, along with Cassiel (Otto Sander) watch over Berlin, listen to people’s thoughts and provide comfort where they can, but the humans are unable to perceive their presence. When Damiel falls in love with Marion, a trapeze artist, he seeks ways to become human.

Much of the film’s dialogue comes from voiceover narration in the form of the thoughts the two angels can hear. This allows viewers to experience Damiel and Cassiel’s distant observation of human life. One can hear and empathize, but do little to ease others’ pain. The film opens with snippets of Peter Handke’s Song of Childhood, excerpts of which are scattered throughout the film, quoted by various characters. Handke is an Austrian novelist and Nobel laureate, and is credited as a screenwriter of Wings of Desire alongside Wim Wenders and Richard Reitinger.

Given the philosophical nature of the film, its cerebral exploration of the human condition, and the poetic dialogue, Wings of Desire is very quotable. Here are some of the best quotes from the movie, translated to English.