Sufjan Stevens and Angelo De Augustine have announced a new collaborative album. It’s called A Beginner’s Mind and it comes out September 24 via Asthmatic Kitty Records. Two songs from the LP, ‘Reach Out’ and ‘Olympus’, are out today, along with a video for ‘Reach Out’. You can find both songs below, and scroll down for the album’s cover artwork (by Ghanaian artist Daniel Anum Jasper) and tracklist.

According to a press release, the album’s 14 tracks are “(loosely) based on (mostly) popular films—highbrow, lowbrow and everything in between.” A Beginner’s Mind began to take shape when the two musicians and Asthmatic Kitty labelmates decamped to a friend’s house in upstate New York for a month-long songwriting sabbatical. They soon found their songs reflecting the films they had been watching, resulting in “less a ‘cinematic exegesis’ and more a ‘rambling philosophical inquiry’.”

“Plot-points, scene summaries and leading characters are often displaced by esoteric interpolations that ask the bigger question: what does it mean to be human in a broken world?” the press release adds.

This year, Sufjan Stevens followed up his 2020 record The Ascension with the five-volume instrumental album Convocations. Angelo De Augustine’s most recent album was 2019’s Tomb. 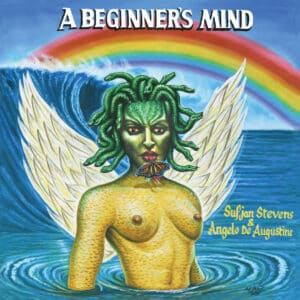