British Sea Power – the English alternative group comprised of brothers Yan and Hamilton Wilkinson, Martin Noble, Matthew Wood, Abi Fry, and Phil Sumner – have announced they’re changing their name to Sea Power. They’ve also announced their next album, Everything Was Forever, which is out February 11, 2022. Listen to the new single ‘Two Fingers’ below and scroll down for the LP’s cover artwork and tracklist.

Discussing the name change, the band explained in a press release: “The band have been thinking about changing their name for years now. It’s become clear that it’s possible to misapprehend the name British Sea Power as indicating nationalism of an insular, jingoistic nature. Twenty years on from their inception, Sea Power now sail forth, free of any national flag of convenience. The new band name is a modest gesture of separation from the wave of crass nationalism that has traversed our world recently.”

They added: “After all, this group have always been internationalist in outlook, as made clear in several songs, most notably Waving Flags, a hymn to pan-European congress. The name Sea Power is also a shorthand by which the band’s audience have long known the group.”

The song is part inspired by our late dad. He was always giving a two-fingered salute to people on the telly – a kind of old-fashioned drinking term, toasting people or events: ‘I’ll drink two fingers to that’, to some news item or to memories of a childhood friend. In the song it’s a toast to everyone, remembering those in our lives and those sadly no longer here and to making the world a better place. The song is ‘F*** me, f*** you, f*** everything.’ But it’s also ‘Love me, love you, love everything’ – exultation in the darkness. If you say ‘f*** you’ in the right way, it really can be cathartic, a new start.

Everything Was Forever Cover Artwork: 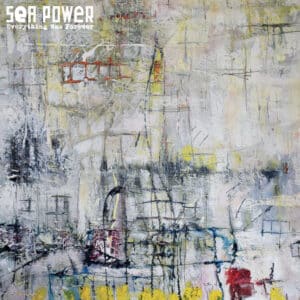 Everything Was Forever Tracklist: