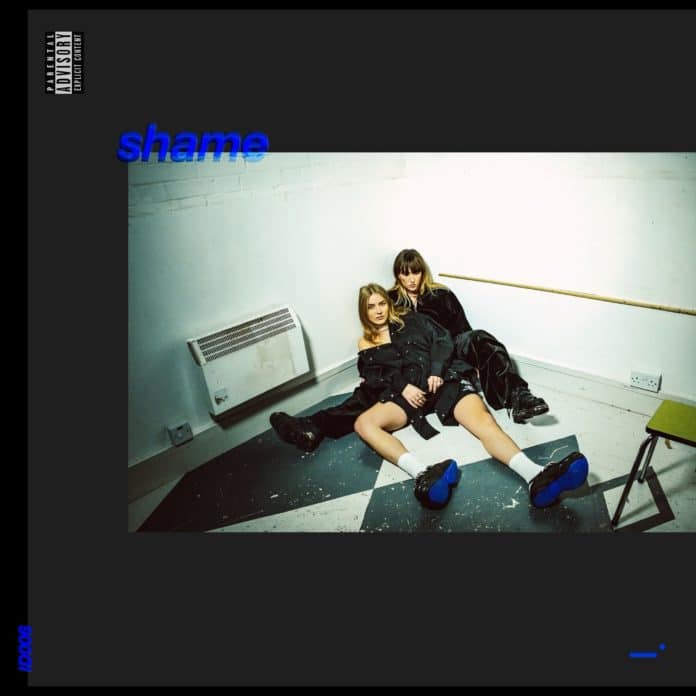 The title of IDER’s debut album, 2019’s Emotional Education, is taken from its most resonant track: “One in four, one in four/ We must be the saddest generation/ Is there any hope for us at all?” Lily Somerville and Megan Markwick pondered on ‘Saddest Generation’, “One in four, one in four/ Where is the emotional education we’re all looking for?” As far as mental health awareness is concerned, the duo seem poised to once again take matters into their own hands on their independently released follow-up. The record is titled Shame, and nearly half of its 8 tracks are named after related emotional states – ‘Bored’, ‘obsessed’, ’embarassed’ – that have a way of blurring into each other. Their purpose is less didactic than simply expressive, an attempt at navigating the psychological effects of enforced isolation and in doing so revealing bigger truths about modern society.

As they proved on their debut, IDER are more than capable of drawing a line between the personal and the collective, but here they fail to consistently strike that balance. The earnest vulnerability that made them stand out is all but lost – “Eating secretly was my shame/ One way or another we’re all addicted to our pain,” they sing on highlight ‘Knocked Up’ – but when the lyrics veer into vagueness the results are clumsy at best and uninspired at worst. It’s especially hard to get past lines like “I hate myself/ I used to be fun and cool, now I don’t fancy myself” or “The world is what we believe/ And not many of us believe in Jesus anymore/ And the darkness is active/ Not still, not passive,” which is followed by an awkwardly timed Kanye West reference: “Better listen to Kanye and pray/ Because you know how the night feels so fantastic.” (Shame came out earlier this month on one of the many scrapped Donda release dates; to IDER’s credit, at least their album arrived on time.)

In a moment of self-awareness, ‘obsessed’ seems to address the struggle of finding the right words (“Am I dealing with something else deep inside?”) before they all come pouring out on the following track, ‘BORED’. The single is by far the best song on the album, and itself something of a revelation. Over a rolling drum beat and simple instrumentation, the pair go through a list of things they’re fed up with in a stream-of-consciousness manner, from relationship issues to the way the music industry exploits artists like them. With each addition, a different shade of the word “boredom” is emphasized: frustration, fatigue, and indeed, shame. They top it all off with a great hook that opens the whole thing up, as if extending a hand to the listener: “Won’t you fail with me?”

‘BORED’ might as well have been the album’s title track; at times the pair are so locked into that pervasive feeling of listlessness that they do little to break the monotony. Shame doesn’t quite live up to the promise of Emotional Education, a record full of brilliant and evocative songs that was occasionally bogged down by flavorless production and mediocre hooks. Instead, IDER deliver a short but punchy collection of mid-tempo alt-pop that has its moments but mostly stays in the same lane, retaining the duo’s personality and distinctive harmonies without doing much to build on them. But though the album often comes off as nondescript and unmemorable, it never feels shallow or pointless: there’s a vastness of human emotion to unpack, and the duo seem fully aware that they’re only scratching the surface here. “Childhood leaves us with a story/ And if we don’t find the words to voice it/ Then we keep going ’round the same old story,” they sing on ‘Knocked Up’. Shame holds a mirror to that endless cycle, even if it doesn’t have that many answers to offer.

Album Review: IDER, 'shame'The title of IDER’s debut album, 2019's Emotional Education, is taken from its most resonant track: “One in four, one in four/ We must be the saddest generation/ Is there any hope for us at all?” Lily Somerville and Megan Markwick pondered on ‘Saddest...