Remi Wolf has announced that her debut album Juno will arrive on October 15. Today, Wolf has previewed the record with two new tracks, ‘Quiet On Set’ and ‘Grumpy Old Man’, both of which come with their own visuals. Check them out below and scroll down for the LP’s cover artwork.

In a press release, Wolf describes ‘Quiet On Set’ as “full on psycho,” adding that “as much as the song is silly and fun, it really does reflect my life and feelings at the time…overworked, manic, reckless, and childish.” Of ‘Grumpy Old Man’, she comments that “some of the most benign things [that] can make me irritated and defensive, which makes me feel old, fragile, and careless.”

Talking about the creation of Juno, Wolf explained:

Creating my debut album ‘Juno’ was like a fever dream. So many changes were happening in my life while I was creating these songs and I think my album really reflects the feelings of tension and release that these changes provoked in me. Every song on this record is a vivid snapshot into what was going on in my life and mindset the day I wrote each one. I hope my Remjobs can hear my honesty and passion come through and, if not, I just hope they think each song is a banger! The album is named ‘Juno’ after my beautiful dog I adopted during lockdown. He ended up being in every single writing session for this album and I consider him my partner, witness, and support in the making of this record. 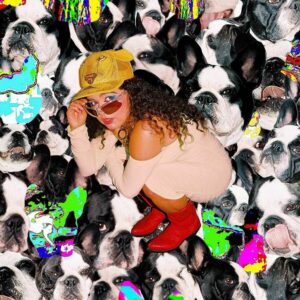